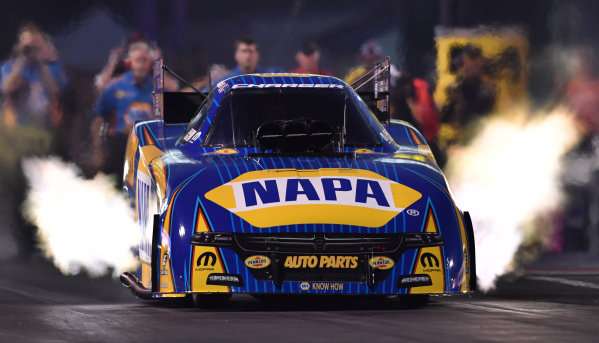 This past weekend, Ron Capps drove his Don Schumacher Racing Dodge Charger funny car to an explosive victory at the NHRA Springnationals – beating the John Force Racing Camaro of Robert Hight and giving the Mopar funny car team its 4th win in 5 events this season.
Advertisement

The Don Schumacher Racing Dodge Charger race cars have dominated the NHRA Funny Car class over the course of the few seasons, winning 15 events (out of 24) in 2015 and winning 14 events plus the championship in 2016. 2017 has proven to be no different, as the DSR Charger drivers have come storming out of the gate to win 3 of the first 4 races.

Heading into the Springnationals at Royal Purple Raceway in Texas, Don Schumacher and his quartet of Mopar funny car drivers looked to extend their winning ways – and they did just that.

Qualifying
Qualifying for the 2017 NHRA Springnationals got off to a slow start, with only two drivers in the Funny Car class getting into the 3-second range – Alexis DeJoria (3.995) and Ron Capps (3.931). Cruz Pedregon, JR Todd and John Force all turned in respectable low 4-second runs, but for the most part, the first round of qualifying was an unimpressive one.

That changed in qualifying round #2, as almost every pair of funny cars to head down the track had at least one car in the 3s. Courtney Force proved to be the quickest with a 3.851, but Capps remained a close second with a run of 3.884. It should be noted that in the second round, Jack Beckman joined Capps in the 3-second club, running a 3.931.

In rounds 3 and 4, more drivers ran in the 3-second range, but none of them were able to match the 3.8X runs of Force and Capps, so their second round runs ended up putting the Force Camaro in the top spot with the Capps Charger in the 2nd position. John Force was 3rd and Robert Hight was fourth after qualifying, so headed into the elimination rounds, three of the top four cars were John Force Camaros. The other Don Schumacher Dodge Chargers (beside Capps) were Beckman in 6th, Tommy Johnson Jr and 7th and Matt Hagan in 11th – giving John Force Racing the edge as the funny cars headed into the main event.

Eliminations
The Don Schumacher Racing Dodge Chargers didn’t qualify all that well as a group and that bad luck continued into the first round of eliminations at the 2017 Springnationals. Tommy Johnson Jr lost to Jonnie Lindberg and Matt Hagan lost to teammate Jack Beckman. Of course, Beckman advanced to round #2 with the win over Hagan and Capps easily beat Todd Simpson, but while only two of the DSR cars advanced to the second round – all of the JRF Camaros won in round #1. Courtney Force beat Jeff Diehl, John Force beat Del Worsham and Robert Hight turned the best ET of the first round, soundly beating Jim Campbell.

In the second round, things were a little brighter for Don Schumacher Racing fans, as Fast Jack Beckman turned the fastest ET of the round to beat John Force while Ron Capps advanced to the final four by beating Jonnie Lindberg. On the other side of the ladder, Courtney Force beat Alexis DeJoria and Robert Hight took down JR Todd. As a result of the ladder layout, this setup a battle between the two Camaros and the two Chargers to see who would advance to the finals.

In the Camaro-vs-Camaro battle, the two drivers had nearly identical reaction times, but Hight went slightly quicker to get the win.

In the Charger-vs-Charger battle, Capps turned a starting line advantage into an easy win when Beckman ran into engine troubles almost immediately after the green light.

This set up a battle between Ron Capps and Robert Hight, two drivers who turned in two of the quickest qualifying times and some of the quickest ETs during eliminations – and it would be a thriller between the two rival teams.

The Final Round
The final funny car race at the 2017 Springnationals saw Robert Hight and his John Force Camaro get out to a slight starting line advantage (.057 to .060) over Ron Capps. Hight ran into engine troubles early and the car began to dance, allowing Capps’ Charger to pull ahead and take the win. However, as Capps neared the finish line, his supercharged Hemi exploded, engulfing the car and the driver in flames as he took the win. Meanwhile, Hight’s engine troubles led to him crossing the center line and taking out some timing boxes, so he was technically disqualified anyways. You can watch that final run in the video below.

In the end, Ron Capps got the win and even with the fiery finish- he was safe and sound after the race.