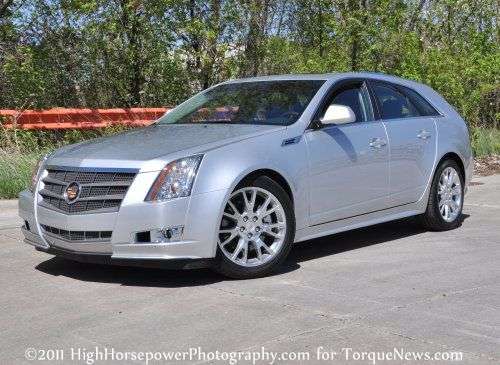 Cadillac was the strongest automotive brand in the US for January 2011 with their nearly-50% growth compared to last January helping General Motors to be the strongest of the American automakers in terms of both percentage growth and units sold.
Advertisement

2011 marks the first full year of the new General Motors, with just Cadillac, Buick, GMC and Chevrolet carrying the GM shield but even in losing a handful of brands since last January, GM still saw a growth of 23% over the first month in 2010. This made them the strongest of the Detroit Big 3 in terms of growth and with 178,896 vehicles sold last month, they were the bestselling company in the US market. If not for Jaguar/Land Rover showing a strong month in terms of growth, GM would have been the best in the US market but while Jaguar/Land Rover had less than 1% more growth than GM, the General moved over 5500% more units than the British luxury brands (178,896 from GM, 3,206 for Jaguar/ Land Rover)

Cadillac saw the lowest number of units sold among the GM brands but with 12,580 vehicles sold last month, it was the best brand in the US in terms of growth – nearing a 50% improvement over last January. The Cadillac CTS lineup continued to be the brand’s champion, with the most units sold (4362) and the second best growth rate compared to last year (70%). The DTS was the best vehicle in terms of growth with 121% improvement over last year with 1,365 luxury sedans sold and the Cadillac SRX crossover continued its massive success – sending out 4,236 new SUVs last month for an improvement of 31% over January 2010.

Buick was the next strongest in terms of growth with a 32% improvement over January of 2010. The Enclave was the strongest vehicle in the brand in terms of sales with 4,347 units sold for a growth of 7% and surprisingly, the Lucerne was the top Buick in terms of growth with a 62% jump over last January. The 2011 Regal remained strong, with 2,335 units sold and the LaCrosse had a less-than-wonderful month with an 11% decline in sales compared to last January but 3,771 sedans were delivered in the slow month.

Chevrolet was technically the “weakest” of the GM brands in terms of percentage growth with just 19% more units sold in January 2011 compared to the same month in 2010 but with 125,389 vehicles sold, Chevrolet was once again the bestselling single brand in the US market. As can be expected, the Silverado truck lineup was the bestselling vehicle from Chevy with over 28,000 trucks accounting for an improvement of 24% from last January. The Impala was second in terms of sales with 15,188 sedans making for an improvement of 39% and next up was the Malibu with 14,102 units sold. Perhaps the biggest news from Chevrolet was the early success of their 2011 Cruze – as the first month of the 2011 year, the new c-segment compact sedan moved 13,631 units, making the Cruze the 4th bestselling vehicle in the first month of its first year of production. The strongest vehicle from Chevrolet in terms of growth was the Express van with 90% more vehicles sold this January than last and the Traverse crossover was next in terms of growth with a 50% improvement over last year.