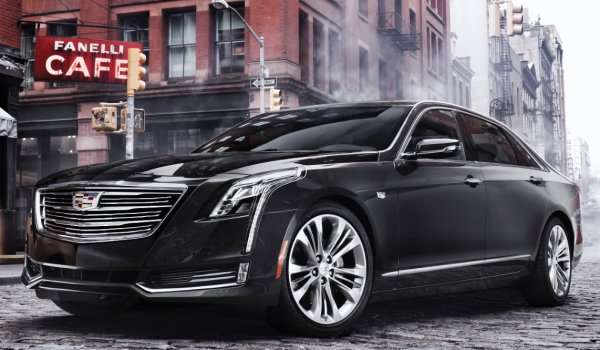 General Motors has announced the pricing for the 2016 Cadillac CT6 and with a price starting at just $54,490 including destination, the new flagship Caddy is a full sized luxury bargain – even when it is loaded up in the top of the line trim.
Advertisement

The 2016 Cadillac CT6 is a big deal for General Motors, as it marks the return of a proper rear wheel drive, full size luxury sedan to the premium luxury lineup while also introducing the new naming process that will eventually spread across the majority of the brand. The CT6 may not outsell the current CTS and ATS due to its higher starting price, but it will most certainly give Cadillac a better large sedan to battle the best from Mercedes Benz, BMW and Lexus.

"The CT6 is an entirely new approach to prestige luxury, adding driving dynamics and technology while reducing the bulk of traditional large sedans," said Johan de Nysschen, president of Cadillac. "With the CT6, Cadillac has a competitive edge: our use of advanced lightweight construction and innovative technology, it is prestige luxury reimagined."

The “base model” 2016 Cadillac CT6 comes with a 2.0L turbocharged 4-cylinder engine that sends 272 horsepower and 295lb-ft of torque to the rear wheels via an 8-speed automatic transmission starts at $54,490. When you step up to the naturally aspirated 3.6L V6 with standard all-wheel drive and 335 horsepower, the price rises to $56,490 and when you swap out the naturally aspirated 3.6L V6 for the twin turbocharged 3.6L V6 with 400 horsepower, the starting price comes to $65,390. Like the 4-cylinder base engine, both of the optional V6 engines come with the 8-speed automatic.

Finally, the 2016 Cadillac CT6 Platinum starts at $84,460, bringing in all of the top of the line goodies that you could want from a large luxury sedan.

CT6 VS The Competition
For comparison among other all-wheel drive, large luxury sedans, the Lexus LS460 with all-wheel drive starts at $76,405, the BMW 750 xDrive starts at $98,395 and the Mercedes Benz S550 4Matic starts at $99,575 – making the 2016 Cadillac CT6 with even the twin turbo V6 a smokin’ deal. In fact, even when you opt for the CT6 Platinum, the loaded Caddy costs at least $15,000 less than the least expensive comparable BMW or Benz.

Also, for the sake of discussion, I should mention that the current Cadillac XTS with the naturally aspirated 3.6L V6 and front wheel drive starts at $46,290. When you opt for the XTS4 with the twin turbo V6, the price rises to $64,765, so the new CT6 with the similar engines are only slightly more expensive than the front wheel drive XTS.

CT6 Hybrid on the Way
Finally, General Motors teased us with a bit of information on the upcoming CT6 Hybrid. The details include 335 horsepower, 432lb-ft of torque and vastly better fuel economy than any of the other models – although no fuel economy numbers have been announced for any of the new CT6 models.

Production of the 2016 Cadillac CT6 will begin at the Detroit Hamtramck plant in January and the first units will begin reaching showrooms around the country starting in March of 2016.