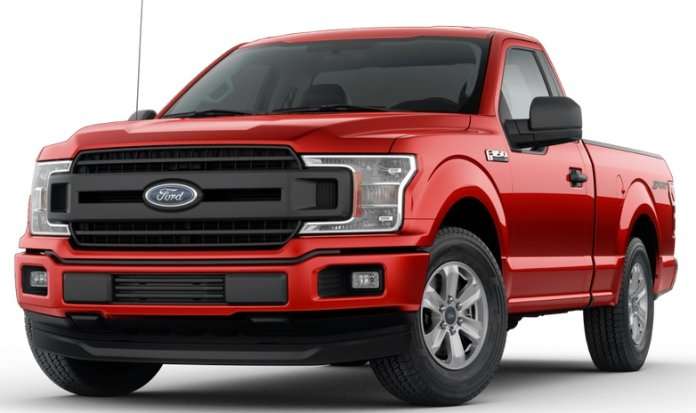 The 2018 Ford F150 configurator is live on Ford.com and while the Motor Company still doesn’t offer a proper replacement for the old SVT Lightning, you can build a pretty stout sport truck while keeping the purchase price relatively low.
Advertisement

The last time that Ford Motor Company offered a proper on-road sport truck was back in 2004, when you could walk into your local Ford dealership and drive out in an F150 SVT Lightning. That rear-drive, half ton truck was powered by a supercharged 5.4L V8, creating 380 horsepower and 450lb-ft of torque, which with the short bed, short cab construction made for one quick sport truck.

Since the Lightning left the lineup, every high performance pickup from FoMoCo has been an offroad ready Raptor, and while the previous generation Raptor with the 6.2L V8 and the new Raptor with the 3.5L EcoBoost are solid performers on the road as well as in the mud – the Raptor fails to meet the requirements of the sport truck market.

The biggest concern with the new Raptor from those who want an F150 which will tear up the street is that it has chock full of features which make it a great offroader. More importantly, those offroad features increase the price significantly, so someone buying a new Raptor to go fast on the street will be paying for a bunch of features which he or she may not ever use.

Fortunately, prospective Ford F150 buyers who are most concerned with on-road performance can buy a new pickup which will serve as a great basis for a simple sport truck build.

The 2004 Ford SVT Lightning F150 was a short cab, short bed, rear wheel drive pickup with a supercharged V8 delivering 380hp and 450lb-ft of torque. There is no supercharged V8 offered for the 2018 F150, but there is a short cab, short bed, rear wheel drive version which can be fitted with the 5.0L V8. That engine delivers 395 horsepower and 400lb-ft of torque, so it packs more horsepower and less torque than the 2004 Lightning, but unlike the supercharged Lightning – the 5.0L 2018 F150 has a 10-speed automatic transmission which bolsters low end acceleration and fuel economy at the same time.

For that price, you get a relatively bare bones pickup, but it has the 395hp V8 paired with the 10-speed automatic, which will likely make for a quick stock pickup. Add some extra power via some minor intake, exhaust and tuning changes, and you will have a truck which will easily go head to head with a stock 2004 Lightning with a very real chance of winning.

If you want a little more than a base truck, adding the XL Sport Appearance Package makes a big impact, adding fog lights, body colored bumpers, a body colored front fascia and 17 inch aluminum wheels – along with the features of the 301A popular equipment group (301A is required to add the Sport Appearance Package to the F150 XL). The 301A package adds power windows, power door locks, power tailgate locks, the 4.2” driver information screen, a 4.2” infotainment screen in the center stack, cruise control and some other small upgrades around the cabin.

Adding the Sport Appearance Package and 301A brings the price of the 2018 Ford F150 XL with the 5.0L V8 to $32,750, while adding the 8 inch infotainment screen with satellite radio lifts the purchase price to $32,945. Finally, I would add the simple Class IV trailer hitch received, because there is no excuse for not having a hitch on a strong half ton pickup.

Even if you rarely use it, the ability to pull a trailer is there when you have a hitch – so if you are buying any new truck, get the factory hitch setup.

On the other hand, the 2018 Ford F150 Raptor – while far more heavily appointed in every area – starts around $51,000. Although the Raptor is a far more impressive truck inside and out, someone looking to buy a small, quick 2018 F150 for the best on-road performance should find the simple XL package with the 5.0L V8 and a few basic options a great pick for the money.

gregsfc wrote on September 8, 2017 - 9:58pm Permalink
I'd contend that the std cab, short bed, 2wd, XL with sport trim and the 2.7 EB with 10 speed with 400 ft lbs starting at 2750 could hang right there with the higher ponied 5.0, at least the first quarter mile for $1000 less as an almost-SVT_-like sport truck. I've never read a review that would suggest that the V8 out sprints the little engine that could. A sport minded pickup prospective buyer may want to order 3.55 gears and by opting for the 2.7, one might actually find one in dealer stock.
Lance wrote on January 21, 2019 - 9:57pm Permalink
Does adding the $195 sirius radio option upgrade the screen to the 8" model? In the configurator this option does not show an 8" screen when viewing the build using the 360* vehicle view. I would like the 8" MFT screen in the reg cab shortbed with the 5.0. Anyone have hard facts on this? [email protected]*il.com