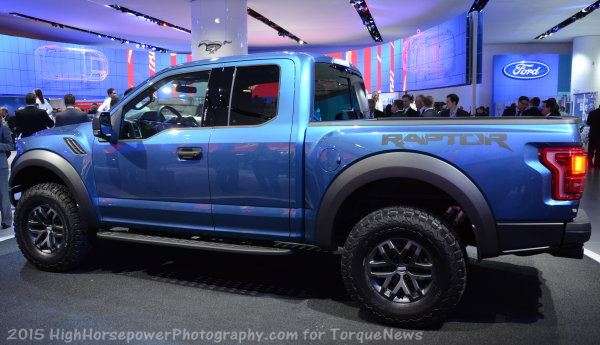 Prior to the debut of the 2017 Ford SVT Raptor F150, we weren’t sure if the new SVT pickup would be an on-road or off-road performance truck, but based on the rumored specs of the next gen Raptor, it could satisfy the performance needs of both types of go-fast truck buyers.
Advertisement

Since the SVT version of the Ford F150 became the Raptor instead of the Lightning, there have been F150 fans who wanted an on-road performance pickup wearing the Blue Oval. The previous generation Raptor was an awesome performance pickup, but it focused more on off-road capabilities than high speed performance. When it was announced that the next generation SVT F150 was another Raptor, those folks hoping for a new Lightning were disappointed, but based on the rumored specs of the 2017 Raptor, this truck might pack enough performance for all high performance truck buyers.

The SVT Lightning spent the early 2000s as one of the most respected performance trucks on the market and even today, it isn’t uncommon to see a blown SVT F150 at the drag strip, tearing up performance cars. Unfortunately, Ford killed the Lightning off after the 2004 model year and while there have been plenty of rebirth rumors – no new Lightning has ever seen the light of day.

The Raptor Arrives
Ford did introduce the high performance SVT Raptor for 2010, but with just 310 horsepower and 365lb-ft of torque in a package that was only available as a SuperCab with four wheel drive, it just didn’t pack the power that Lightning owners had loved so much. It was much heavier than the Lightning with much less power, so while it was a dream come true for off-road enthusiasts, it didn’t do much for those folks who wanted something a little more Lightning-like.

Shortly after the debut of the Raptor with the 5.4L V8, Ford rolled out a 6.2L engine for the SVT F150, packing 411 horsepower and 434lb-ft of torque. That extra power made a world of difference, but the Raptor was still too heavy to satisfy on-road truck racers, so those folks continued to plead for a new Lightning.

That Lightning hasn’t arrived yet, but based on the rumors and known figures on the 2017 SVT Raptor F150, perhaps there is finally a high performance half ton Ford truck that will make both groups happy.

The New SVT Raptor F150
When Ford introduced the 2017 SVT Raptor F150 at the Detroit Auto Show last month, they were surprisingly short on the details. We know that the new Raptor will pack a specially tuned version of the 3.5L EcoBoost V6 and we know that the power will be sent to a super-advanced four wheel drive system via a new 10-speed automatic transmission. We also know that the next gen Raptor will feature the aluminum body panels of the entire 2015 F150 lineup, which is expected to cut weight by some 700 pounds.

Even though the 2017 Raptor F150 was introduced as a SuperCab, four wheel drive model, weight reduction efforts from top to bottom will help to make the new Raptor quite a bit lighter than the previous models. Also, it is expected that the specially tuned 3.5L EcoBoost V6 will deliver 450 horsepower and at least 450lb-ft of torque. Provided that these numbers are accurate (if not low), the new Raptor will offer more power than any Ford sport truck in the past and with the lower curb weight – this new Raptor might be able to offer on-road performance that we haven’t seen since the demise of the Lightning.

Realistically, if the 2015 SVT Raptor F150 ends up having 450 horsepower and 475lb-ft of torque, even with it being offered only with four wheel drive, the new Raptor could provide the on-road performance that Lightning fans demand – all while still being the most off-road capable half ton truck ever.

LG's New EV Battery Plant Is a Welcome News for Tesla
Tesla Giga Berlin's New Hurdle: It's Not Only the Gov't, but Now Tesla Itself
END_OF_DOCUMENT_TOKEN_TO_BE_REPLACED