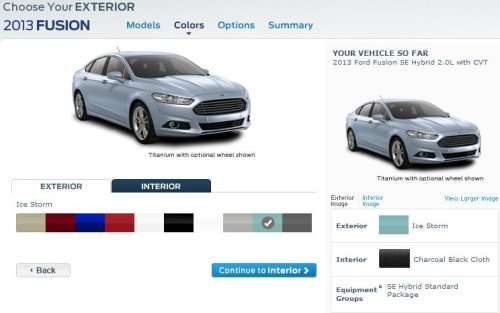 Ford Motor Company has added the first configurator site for the upcoming 2013 Ford Fusion and while there are currently no prices for the new sedan – this build site allows prospective buyers a chance to look at the trimline and features of the 2013 Fusion set to arrive in dealerships later this year.
Advertisement

The 2013 Ford Fusion configurator currently lists 4 trimlines – S, SE, Titanium and SE Hybrid – and after inputting your zip code you can see those trimlines offered in boxes with standard and key information listed for each model. You won’t find prices just yet for the 2013 Fusion but there isn’t much else left to the imagination by the new Fusion build site.

The 2013 Ford Fusion S comes only with the 2.5L iVCT engine mated to an automatic transmission with Ford’s SelectShift system. Other standard features for this entry level Fusion include 16” steel wheels (and hubcaps), a remote keyless entry system, a stereo system featuring AM/FM/MP3/CD input with Sync and MyFord, cruise control, a tire pressure monitoring system, a standard passive security system and many more amenities that you would expect from the Ford Fusion. The Fusion S is available in Ginger Ale, Bordeaux Reserve (dark metallic red), Deep Impact Blue, Ruby Red, Tuxedo Black Metallic, Oxford White, Ingot Silver and Sterling Grey on the outside with the only interior color choice being “Earth Cloth”. The only options currently available for the 2013 Fusion S are all weather floormats and a trunk cargo net.

When you step up to the 2013 Ford Fusion SE, you get all of the items from the Fusion S plus 17” aluminum wheels, a 10 way power driver’s seat, automatic headlights, Ford’s SecuriCode keypad entry system, heated exterior mirrors, a rear center armrest with cupholders and body colored rocker moldings. Also, Fusion SE buyers can pick from the 2.5L 4-cylinder, the 1.6L EcoBoost with or without auto start-stop and with either a manual or automatic transmission or the 2.0L EcoBoost with an automatic transmission. Those Fusion SE models equipped with the 2.5L iVCT engine can pick from the same colors as the Fusion S but inside, there is the option of Charcoal Black or Dune cloth. If the Fusion SE is equipped with the 1.6L EcoBoost engine option, buyers can also pick from Charcoal or Dune colored leather and those models equipped with the 2.0L EcoBoost can pick from Charcoal cloth, Charcoal leather or Dune leather. The 2013 Fusion SE comes with lots of option packages like the SE Appearance Package (18” wheels, rear spoiler, fog lights), the SE Luxury Package (heated leather seats, leather wrapped steering wheel, power passenger seat, fog lights), the SE Technology Package (upgraded stereo system, rear camera, dual zone climate control), the SE Luxury Driver Assist Package (110V output, blind spot monitoring, automatic high beams, rain sensing wipers) a moonroof, adaptive cruise control and much more.

The 2013 Ford Fusion Titanium is available only with the 2.0L EcoBoost engine mated to an automatic transmission but buyers can pick from front or all wheel drive. This package comes with all of the goodies from the highest end SE package but adds 18” aluminum wheels, leather/heated sport seats, a Sony premium sound system, Intelligent Access with push button start, a rear view camera system and much more. The Fusion Titanium is available with all of the same exterior options but only Charcoal Black Leather is offered inside. The Titanium is so loaded up that there are fewer options to add on but those who want even more content can add a Titan Driver Assist Package, Active Park Assist, and other high tech gadgets.

Finally, the 2013 Ford Fusion SE Hybrid starts with many of the features from the non-hybrid models and adds a 2.0L Hybrid drivetrain with a continuously variable transmission (CVT), 17” aluminum wheels, and unique “Ecocloth” seats. Hybrid buyers can pick from two extra exterior colors (Ice Storm shown on the right), White Platinum TriCoat Metallic) but interior colors are the same Charcoal or Dune cloth or leather options that are available in the Fusion SE. In terms of accessory packages, the SE Hybrid includes many of the same upgrade options as the non-hybrid Fusion SE.

Click here to head to the 2013 Ford Fusion configuration website to build your own new Fusion. The site offers a great look at what trimlines will come with what features and options but it could be a few more weeks until we have full pricing. The Fusion is set to hit the market later this year and we can expect pricing to hit shortly before the car arrives in dealerships.