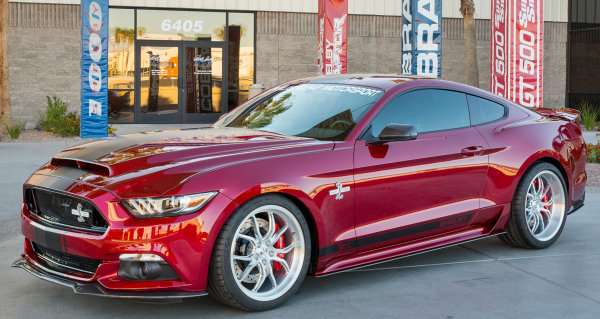 Although the new Ford Mustang is sold out well into the 2017 calendar year, an Australian high performance tuning shop is offering up a limited number of new Shelby Super Snake Mustangs with 650-750hp – just like the super-tuned pony cars sold here in the USA.
Advertisement

In the world of the Ford Mustang, there is no name more closely associated with high performance than that of the late, great Carroll Shelby. The Shelby name has been attached to some of the most powerful Mustangs in the 50+ year history of the car and among Mr. Shelby’s most well-known pony car packages is the mighty Super Snake. The Super Snake has been one of the most potent Mustangs in the last two generations and thanks to the tuning company Mustang Motorsport, the newest Super Snake is headed to Australia.

Aside from those three points, the Ford Mustang Shelby Super Snake sold by Mustang Motorsport is the same as the beast sold in the US.

The Super Snake starts out as a 2015 or 2016 Ford Mustang GT with the 5.0L V8 packing 435hp and 400lb-ft of torque. The Shelby package adds a Ford Racing supercharger package that lifts the output to 650 horsepower with the help of a Borla exhaust system and a proper engine tune. The American version makes 670 horsepower and while there are no details on why the two packages have different power ratings – those 650 ponies will surely be well appreciated by Aussie buyers.

After the engine has been beefed up to make big power, the Mustang Super Snake package adds an elaborate body kit, a new hood, monoblock wheels wrapped in high performance rubber, Wilwood 6-piston brakes and a collection of Shelby badges and stripes. Lastly, the Super Snake packages adds upgraded seat skins with the Shelby logo, unique interior badges and a new gauge package.

The “base” Ford Mustang Shelby Super Snake being sold by Mustang Motorsport has an MSRP of $87,200 and for that price, buyers Down Under will have one of the baddest ponies on the street…but what if you need even more power?

That is where the 750 horsepower package comes into play.

While details are somewhat short via the Mustang Motorsport website, we know that there is an available 750 horsepower Super Snake package which adds a different supercharger and an upgraded cooling package. Of course, it also adds to the bottom line, as the 750+ horsepower Mustang Super Snake has an Australian MSRP of $98,000.

In addition to being kind of pricy, the 2015-2016 Ford Mustang Shelby Super Snake being offered by Mustang Motorsport is available in very limited numbers. To be exact, only 300 examples will be built, so if you are a wealthy Australian resident who loves really fast American muscle cars, it would be wise to contact Mustang Motorsport as soon as possible to reserve your 650-750 horsepower Ford Mustang.

bill wrote on May 19, 2016 - 5:56am Permalink
$98,000 for a mustang you must be joking , you could get a gtr or a tesla p90d for that money and eat the mustang
Cam wrote on May 22, 2016 - 1:25am Permalink
Bill you misunderstand. That's on top of the purchase price of $68,000 for the donor Mustang GT from your local ford dealer. So total is around AU$150-$160,000. And as a multiple Mustang owner I can tell you it's a total rip off. I've sourced my own parts from the states and done similar for way less than half that. As usual massive price gauging from local companies. But they'll feed you BS about we've adapted things for Aus conditions. Utter crap that adds a few $$ that's it.