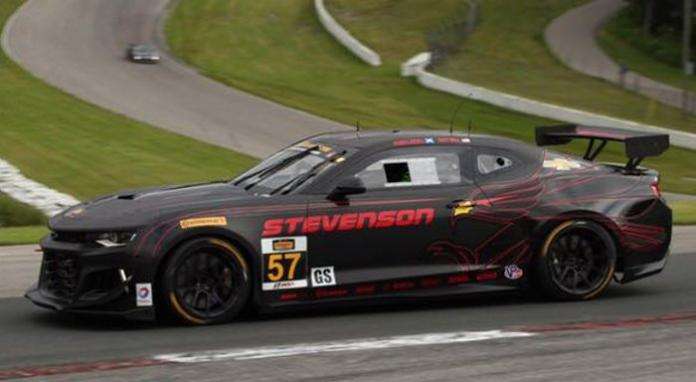 After the 5th generation Chevrolet Camaro made a name for itself in the world of IMSA factory-based road racing, the crew at Pratt & Miller built the Camaro GT4.R to take on the Ford Mustang. This new Camaro race car debuted earlier this year and as the teams headed to Canadian Tire Motorsport Park for its 3rd race – one which would prove to be an exciting day for Stevenson Motorsports.

Camaro GT4.R at Canadian Tire Motorsport Park
The Continental Tire Sports Car Challenge event at Canadian Tire Motorsport Park began with a trio of practice sessions and during the first two sessions, the #57 Chevrolet Camaro GT4.R of Matt Bell and Robin Lidell was stuck in the bottom half of the GS class field while Porsche, McLaren and Ford Mustang teams controlled the top spots.

In practice sessions 1 and 2, the Camaro was 7th and relatively quick fields. The 3rd and final practice session saw the top-running McLaren run significantly quicker than it was in the earlier rounds, but overall, the GS class was slower in the final practice run. This worked out well for the #57 Camaro turned in its best time of the practice rounds – enough to move it into the 2nd spot in the class.

Unfortunately for the Stevenson Motorsports team, the field got quicker for qualifying, but thanks to a strong qualifying effort, the team was able to grab the 5th spot. The first four spots were occupied by a pair of McLarens, a Porsche and a Ford Mustang.

Early in the race, the #69 McLaren 570S GT4 had pulled out to a massive lead over the rest of the GS field, but a caution with 49 minutes into the race bunched the field back up for a restart. More importantly, during that caution, the #69 car was penalized for passing the pace car and as a result, the team dropped from 1st to 5th. When the McLaren fell back in the field, Robin Lidell took the lead with just over an hour remaining and he never looked back.

Well, he likely looked back at least a few times, with the #69 McLaren eventually coming back to take the lead, but Lidell was able to put the #57 Camaro into the lead, spending the late stages of the race holding off a Porsche and the pole-sitting McLaren to take the win.

In the final minutes of the race, Lidell and the #57 Camaro GT4.R pulled away from the rest of the field, winning by nearly 7 seconds. The Ford Mustangs in the GS field finished 19th overall and 29th overall (last), so in just its third race – the 6th gen Camaro race car has proven to be one of the best in the series.