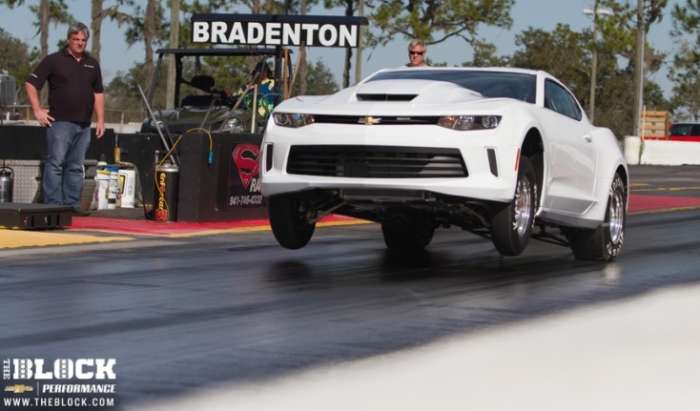 The COPO drag racing package is the quickest of all factory built Chevrolet Camaro models and with the 2016 models arriving, Chevrolet received more than 5,500 purchase inquiries for the 6th gen Camaro drag car – but only 68 will actually get to buy one.
Advertisement

The COPO Camaro is arguably the baddest of the modern Chevrolet Camaros, but with this car designed from the ground-up for NHRA Stock and Super Stock racing, the COPO cars aren’t legal for street use. In fact, they don’t even come with a VIN, which is necessary to register a car in the United State for license plates. Due to the extreme nature of the COPO Camaro, only 69 units are made each year (69 was picked to pay tribute to the 1969 COPO Camaro) and that makes these stock 8-second muscle cars very hard to get.

Buying the COPO Camaro
As has been the case with past COPO Camaro production runs, the new 2016 COPO Camaro was sold via a special process that asks interested parties to sign up to buy one and from that group, the 69 buyers are randomly selected. Technically for 2016, it will be 68 buyers, since 2016 COPO #1 was auctioned off this past weekend for charity. Also, it is unclear whether General Motors will sell all 68 remaining units or if they will do something special with 2016 COPO #69 – like keep it for their heritage center collection.

According to the folks at Autoblog, the 2016 COPO Camaro received more than 5,500 registered inquiries to try to buy the new factory built drag car. Unfortunately, with just 68 vehicles available, a great many of those folks will be disappointed, but for those who do have their names picked – they are about to own what could be the best performing Camaro ever.

Once the buyers have been picked, a Chevrolet representative will contact them to complete their order. At this point, the buyers decide whether they want the supercharged 350 or one of the naturally aspirated engines – or all three of the available engines with matching serial numbers. The Chevrolet rep will also find out what color the buyer wants, whether or not they want the graphics package and which dealership they would like to visit for delivery.

Also according to Autoblog, the GM’s Jim Campbell stated that of the folks who have bought the COPO Camaro over the past few years, there is a 50/50 mix of people who race them and people who park them in a collection. I have had the pleasure of seeing a few privately owned COPO cars run in person and they really are remarkable turnkey race cars.

Build Your Own COPO
While the folks who wanted to buy the 2016 COPO Camaro as a collectable are out of luck this year, those folks who wanted one to go super stock racing still have a solution. General Motors offers a “body in white” program with the Chevrolet Camaro, so people can buy the rolling chassis and all of the components of the COPO Camaro factory package. From there, they can assemble the components and literally built the COPO Camaro on their own, but it won’t have the serial number or the collectable value of the “actual” COPO cars.

Fortunately, racers aren’t going to care much about collectable value, so this path is just as successful in the long run – although it costs more and obviously entails far more work on the buyer’s end.

Tesla Giga Berlin's New Hurdle: It's Not Only the Gov't, but Now Tesla Itself
Teslas Are Sold Out Until 2023, But The Timing May Reverse
END_OF_DOCUMENT_TOKEN_TO_BE_REPLACED