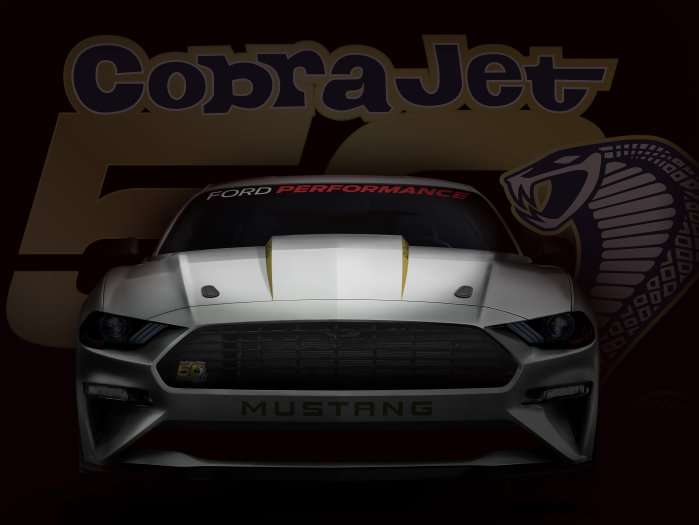 Yesterday marked the 54th anniversary of the original Ford Mustang debut and today, the Motor Company announced their plans for the 2018 Cobra Jet drag racing package – a track-only machine that will celebrate 50 years of Ford performance with the ability to run 8-second quarter mile times.
Advertisement

Back in 1968, the Ford Mustang Cobra Jet were a dominant force in the world of super stock drag racing and over the past few years, Ford Performance has offered the limited edition Cobra Jet package to hardcore racers around the US. The 2018 model year marks the 50th anniversary of the Cobra Jet Mustang and to celebrate the half-century of high performance excellence, the Motor Company is rolling out their quickest factory-built pony car ever.

“From the very first Mustang Cobra Jets dominating the 1968 NHRA Winternationals to our modern-day Cobra Jet racers, the Ford Performance Parts team continues to build the Cobra Jet brand based on its success at the track over five decades,” said Eric Cin, global director, Ford Performance Parts. “That, in turn, has inspired generations of Mustang fans to create their own performance machines for the street.”

2018 Cobra Jet
The 2018 Cobra Jet race car has an exterior design based on the newest Ford Mustang, with the new front end and a package-specific hood. Under that high-rising hood is a new supercharged 5.2-liter Coyote V8. Since actual output will depend on the tuning efforts of each owner, there is no official power rating, but we know that it will put down enough power to run the quarter mile in the mid-8-second range, with speeds in the area of 150 miles per hour.

Like the other Cobra Jet Mustangs, the 2018 model is not street legal and it does not come with the VIN needed to register it for road use anywhere in the USA. It does, however, come with all of the performance and safety features required to legally compete in various super stock classes in the National Hot Rod Association, the National Mustang Racers Association and the National Muscle Car Association.

Only 68 examples of the 2018 Ford Mustang Cobra Jet will be built and all of them will be painted either Race Red or Oxford White, with unique 50th anniversary badging and the distinct Cobra Jet livery.

We don’t know the MSRP of the 2018 Ford Cobra Jet Mustang, but we can expect it to be somewhere north of $100,000. The new race car will officially go on sale this summer, at which point we will get more details on the quickest factory-built Ford Mustang ever.

Cobra Jet Competitors
For the 2018 model year, Dodge rolled out the Challenger Demon, which comes with track-only features that allow it to run in the 9-second range in stock form. The Cobra Jet is considerably quicker than that Challenger, but we should stress that this Mustang isn’t street legal and it is not built to compete with the 840-horsepower Dodge.

The key competitors for the 2018 Ford Mustang Cobra Jet are the Chevrolet COPO Camaro and the Dodge Challenger Drag Pak. All of these cars are designed to run in the 8-second range in stock form (with tuning work from the owners, of course), but they are all extremely limited in terms of production numbers and none of them are legal for road use.

Back in 1968, the Cobra Jet dominated the NHRA super stock class and for 2018, Ford Performance looks to put the Cobra Jet back atop the leaderboard with their quickest Mustang race car to date.