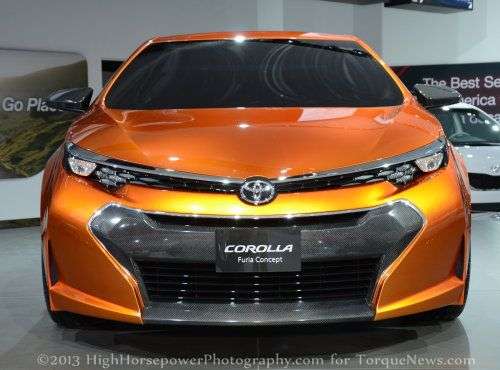 A Toyota dealership in Kansas recently posted a collection of information on the redesigned 2014 Toyota Corolla and while that information has since been taken down, the good people at Motor Trend were quick to publish what they read for us all to enjoy.
Advertisement

When the Toyota Furia Concept debuted back in January at the 2013 North American International Auto Show in Detroit, the Japanese automaker proclaimed that this was the first step towards the next generation of the popular Toyota Corolla. The Corolla hasn’t seen any major changes in a few years and with pretty much every other car in the compact sedan segment boasting a new design and significantly better fuel economy and power figures – we knew that a new Corolla had to be on the way. The company has been fairly tight-lipped on the next generation of the Corolla but thanks to the error in judgment by an unnamed Toyota dealership employee who posted some classified company information on the internet, we have a handful of interesting facts on the upcoming refresh of America’s 8th bestselling vehicle and 5th bestselling car.

1. The 2014 Toyota Corolla is expected to bear a striking resemblance to the gorgeous Toyota Furia Concept that debuted at the Detroit Auto show. Realistically, we really don’t expect that the production Corolla will be quite as aggressive as the Furia Concept (which is a cryin’ shame) but it will likely meld some of the styling cues of that Detroit concept sport sedan with aspects of the current Toyota Camry. If the company was to tone down the headlights of the Furia and maybe calm down the lower front fascia while doing away with all of the exposed carbon fiber, the rest of the Furia Concept would seemingly slide right into production. 2. The 1.8l 4-cylinder engine will return in the 2014 Toyota Corolla but thanks to the addition of engine technology including the Japanese automaker’s Valvematic continuously variable valve timing and lift system, the 2014 Corolla should offer more power and better fuel economy. The current Corolla packs 132 horsepower and 128lb-ft of torque along with fuel economy figures of 27 around town, 34 highway and 30 combined with the 5-speed manual transmission while the 4-speed automatic offers 26, 34 and 29 (city, highway, combined). Those figures put the Corolla near the bottom of the uber competitive C-segment so we can almost be assured that the 2014 model compact sedan will have more power and more impressive fuel economy.

3. The 2014 Toyota Corolla will surprisingly stick with the 4-speed automatic transmission but the manual transmission option will gain a gear, shifting to a 6-speed unit over the current 5-speed option. The addition of 6-speed manual transmission should work with the new engine tech to further the improved fuel economy capacities for 2014. Also, the higher end trimlines will offer a new CVT that may offer a slight improvement in fuel economy and ride quality over the traditional 4-speed auto unit.

4. There will be four available trimlines for the 2014 Toyota Corolla beginning with “base” and moving to LE and S before reaching the new “Eco” package. For 2013, the Corolla is offered as L, LE, LE Special Edition, S and S Special Edition. We can expect that the new Eco model will feature some items to make it the most efficient model in the lineup.

5. Some new upscale options for the 2014 Toyota Corolla include Softex leather, push button start and navigation – showing that the company intends to make good on the promise that the new Corolla would make moves to offer more high end amenities. With the arrival of the 2014 Toyota Corolla anticipated in the coming months, it shouldn’t be long before we get a good look at the next generation of the top selling compact. Until then, this leaked information offers us a very good idea of what to expect when the new Corolla makes it grand debut. Should it look like the Furia Concept – with more power and better fuel economy than the current Corolla – we would expect it to be a massive hit and secure its place atop the top selling cars in the US market.