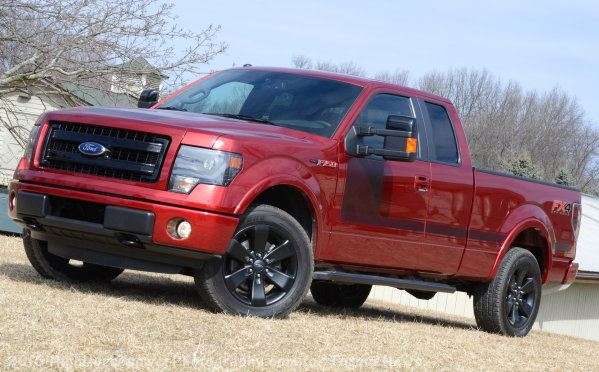 Ford Motor Company has issued a recall for select 2013-2014 Ford F150 pickups equipped with the premium 3.5L EcoBoost V6 over a concern that the master cylinder could be leaking – leading to a possible loss of braking forces and an increased risk of an accident.
Advertisement

The Ford F150 is the bestselling vehicle in America and it has been for decades. Unfortunately for Ford Motor Company, that sales success makes this newest F150 recall a big one, with more than 271,000 trucks being recalled to replace the master cylinder component of the braking system. Should the master cylinder fail and allow the brake fluid to leak out, the affected F150s could lose a major portion of the braking abilities.

It seems that those 2013-2014 F150 pickups with the 3.5L EcoBoost V6 may have been equipped with master cylinders with a problematic seal and as a result, the master cylinder may allow the brake fluid to leak out. As the brake fluid drops below the required level, the truck will begin to lose braking force – although it should be noted that this will only affect the front wheels. The rear braking system is not affected, but losing your front brakes in a full truck will make a massive difference in your ability to stop or slow down.

The way the F150 braking system works is that when you depress the brake pedal, the master cylinder push brake fluid through the brake lines and into the braking assemblies. This fluid force causes the pads to clamp down on the brake rotor, but when the brake fluid runs out, there is no way for the master cylinder to compress the brakes. This will only cause the front brakes to fail, but that is enough to cause a major reduction in braking abilities – especially in sudden, hard-braking situations.

Ford is aware of 9 accidents caused by the braking problem with the 2013-2014 F150, but there were no injuries in any of those accidents. However, the Motor Company also reports that there was “one alleged injury involving interaction with the vehicle’s brakes but not associated with an accident” – whatever that means. Brake fluid is flammable and very corrosive, so if someone got it in their eye or something while working on their truck, it could cause an injury without an accident…but that is purely, 100% speculation.

If you have a 2013-2014 Ford F150 and you have some mechanical knowledge, this is the kind of issue that you can check for yourself simply by looking for moisture around the master cylinder or a low condition in the brake fluid reservoir. If you don’t have any mechanical knowledge and you have a 2013-2014 EcoBoost F150 that might be subject to this recall, it is best to call your dealership for more information.

John wrote on July 21, 2016 - 11:58pm Permalink
These articles on brake failure are all fine and dandy, but it doesn't take a rocket scientist to understand that when the master cylinder runs dry of fluid neither rear nor front brakes work. I believe Ford has confirmed 9 failures and my 2014 happens to probably be the 10th. My low brake fluid light appeared on July 8th 2016 at roughly 8:45am. Less than 4 miles later I had NO braking function. 3.5 QUARTS, not pints but QUARTS of brake fluid later I made it to my local dealership(35 miles). I'm writing this 13 days later and I'm still without my vehicle. According to the dealership parts from Ford still won't be shipped until Tuesday/Wednesday of next week. My advise to my fellow F-150 drivers is take this recall seriously and don't believe everything that you read about the recall. And......Expect a lengthy down time!!!!
Debi wrote on September 28, 2016 - 5:10pm Permalink
This is very concerning. We have a 2015 Ford F150 3.5L EcoBoost. It has approx. 9K miles, and the same thing happened to us - loss of brakes. Ours is not recalled because it is a 2015. Dealership says it may take 24 - 48 hours to diagnose, and they've had it a day already. Sure makes me curious....
Michael Hartman wrote on September 26, 2020 - 10:20am Permalink
I have 2015 F-150 3.6 Eco Boost and my breaks just failed