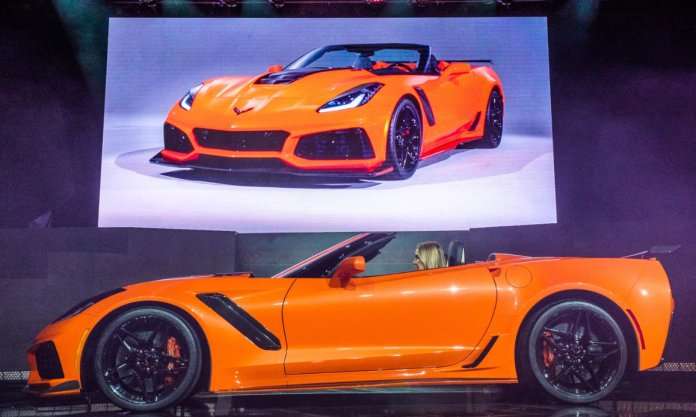 The 2019 Chevrolet Corvette ZR1 will make its American debut this week at the LA Auto Show in both coupe and convertible form, with pricing for the coupe starting at $119,995 while the convertible starts at $123,995.
Advertisement

Earlier this month, the 2019 Chevrolet Corvette ZR1 debuted in Dubai and online, and with the start of the 2018 Los Angeles Auto Show today, the most powerful Vette ever will make its grand debut on American soil. We already know all of the juicy details on the C7 ZR1 in coupe form, but the biggest Corvette news is the introduction of the first modern Corvette ZR1 convertible and pricing for both of the 755hp supercars.

1st ZR1 Convertible Since 1970
The introduction of the 2019 Chevrolet Corvette ZR1 convertible marks the first time since 1970 where the high performance ZR1 package could be ordered with a drop-top configuration. The C4 and C6 ZR1 models were only offered as coupes, so in the modern era, this is the first time that the ZR1 Corvette has a full folding top.

“The new Corvette ZR1 convertible is a supercar in all respects,” said Mark Reuss, executive vice president, Global Product Development, Purchasing and Supply Chain. “Few others can challenge the ZR1 convertible’s power and speed while offering the exhilaration of top-down motoring.”

Of course, the heart of the convertible is the same supercharged LT5 as the engine in the coupe, providing 755 horsepower and 715lb-ft of torque via either a 7-speed manual transmission or an 8-speed automatic with paddle shifters. This should allow the ZR1 convertible to dash from 0-60 in under 3-seconds while running through the quarter mile in the 10-second range. The top speed hasn’t been announced, but it is likely to be well below the 212mph top speed of the ZR1 coupe, but it will still eclipse the 200-mark.

“The ZR1 convertible is a no-compromise supercar,” said Corvette Executive Chief Engineer Tadge Juechter. “Thanks to the strong structure, the suspension tuning between coupe and convertible models is identical, meaning the ZR1 convertible offers the same benchmark performance, including a top speed of over 200 mph.”

The 2019 Corvette ZR1 coupe has an MSRP starting at $119,995 while the new C7 ZR1 convertible starts at $123,995. For comparison, the 2018 Corvette Z06 coupe starts at $80,590 with the manual transmission while the Z06 convertible starts at $85,585 (all prices here include destination), meaning that the upgrades of the ZR1 package add just shy of $40k to the price. Of course, if you begin adding options to the Z06 in order to allow it to better match up with the ZR1, that price gap narrows, but the 755hp package still costs dramatically more than the 650hp package.

Comparisons to the Z06 aside, the 2019 Corvette ZR1 will very likely beat a great many supercars and hypercars from around the world at a fraction of their price. We will have to wait for more detailed performance numbers, but it seems likely that this Corvette will hold its own against just about anything from Lamborghini, Ferrari, Porsche or Audi – often for hundreds of thousands less. For instance, the 730hp Lamborghini Aventador S starts north of $420,000 and the Ferrari 812 Superfast starts around $335,000.

Really, while the Corvette has long been a sports car and the Z06/ZR1 have long been supercars, this new ZR1 is worthy of being included in the hypercar class, among some of the greatest performance cars ever.