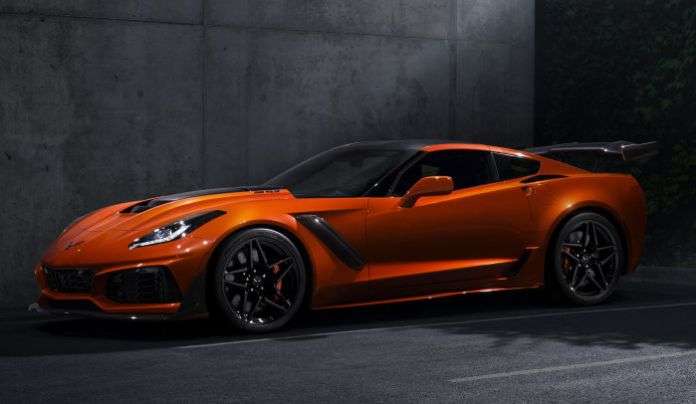 After leaking last week on the cover of Car & Driver, the 2019 Chevrolet Corvette ZR1 made its public debut in Dubai, finally giving us all of the key information on the new American supercar – and some of the official information differs from what was posted online last week.
Advertisement

Last week, the cover of the December Car & Driver introduced us to the 2019 Chevrolet Corvette ZR1 when the magazine cover leaked early. That was the first real confirmation that the ZR1 was coming and with that news came our first look at the new supercharged Corvette. The cover also stated that the C7 ZR1 would pack 750 horsepower.

The next day, information which allegedly came from inside of the December Car & Driver also showed up online, at which point we had information like torque output, engine details, weight and price. As it turns out, some of that information was inaccurate, but with the new Corvette making its debut yesterday in Dubai – GM has offered up all of the actual information on the C7 ZR1.

Here is a quick rundown of the key facts on the 2019 Chevrolet Corvette ZR1 and it should be noted that these are all official figures – not something taken from a magazine or internet forum.

The Most Powerful, Fastest Corvette Ever
As expected, the 2019 Chevrolet Corvette ZR1 is powered by a supercharged LT5 pushrod engine which features both direct injection and port injection. This new mill measures 6.2 liters and it is topped by an internally-intercooled supercharger setup that is 52% larger than the blower on the Z06’s LT4. Contrary to what the leaked magazine information suggested, the new ZR1 delivers 755 horsepower and 715lb-ft of torque, making it the most powerful Chevrolet product ever, the most powerful GM product ever and the most powerful vehicle to ever wear the Corvette crossed flags.

“I’ve never driven a Corvette like this before, and nobody else has either, because there’s never been one like this before,” said Mark Reuss, executive vice president, Global Product Development, Purchasing and Supply Chain. “Its unprecedented performance puts all other global supercars on notice that the ZR1 is back.”

That engine can be paired with the 7-speed manual or the 8-speed auto, marking the first time that the Corvette ZR1 has been offered with a self-shifting gearbox.

After the overheating issues with the C7 Corvette Z06, the new ZR1’s LT5 features a vastly-upgraded cooling system behind a front fascia that offers improved air flow without compromising the aerodynamics needed to travel at speeds in excess of 210 miles per hour.
That’s right – with the “basic” aero kit, the 2019 Chevrolet Corvette ZR1 has an official top speed of 210 miles per hour.

Of course, with the optional high wing of the ZR1 ZTK Performance Package, the top speed comes down as high speed downforce increases to levels 60% higher than the Z06 with the Z07 package. That ZTK package includes a unique front splitter with carbon-fiber end caps, Michelin Pilot Sport Cup 2 high performance tires and specific Magnetic Ride Control tuning for the best possible track times. Like the Corvette race cars, both of the ZR1 rear wings are tied into the chassis rather than the body for the greatest aero impact and stability.

On the inside, the Sebring Orange Design Corvette ZR1 features standard leather-trimmed seats with sueded microfiber inserts offered, but heated/cooled Napa leather-trimmed seating is also available. Buyers can also added a carbon fiber trimmed steering wheel, the competition sport seats, the Performance Data Recorder (that I am surprised is not standard) and a Bose premium sound system.