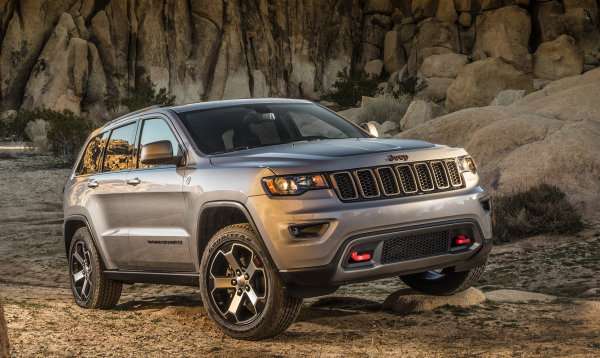 The 2017 Jeep Grand Cherokee Trailhawk offers the greatest off-roading capabilities in the model lineup, a cabin loaded with premium features and room for five for under $50,000 – making it one of the best options on the market for someone shopping for a luxury SUV that can be taken off-road with confidence.
Advertisement

However, many of those folks who buy a 2017 Jeep Grand Cherokee Trailhawk will spend time on rough rural roads, so when testing the most Trail Rated of the current big Jeeps, I spent 8 days driving on the roughest roads in my area. Many of these roads are so beat up during the winter that your average sedan could not make it more than a few miles without breaking a suspension component or getting stuck in the mud. In some places, the roads are flooded with mud and in pretty much every place along these roads, there are potholes that can easily blow out a tire.

These roads would seem outrageous to some people who live in an area with nothing but paved roads, but for many of the people living on the outskirts of Metro Detroit – these rough, muddy roads are a daily battle. While these roads are a nuisance for some, they give me a chance to test new trucks and SUVs on public roads which are much rougher than many people will ever encounter, essentially providing me with a worst-case driving scenario for a vehicle like the new Grand Cherokee Trailhawk.

Pricing
The 2017 Jeep Grand Cherokee Trailhawk is a premium package and it only comes with a long list of standard features. The Trailhawk package adds Jeep’s Quadra-Drive II 4x4 system, a package-specific version of the Quadra-Lift air suspension system, underbody skid plates, unique 18-inch aluminum wheels wrapped in Goodyear Adventure off-road tires, red tow hooks and the black anti-glare decal on the hood – along with the Trailhawk badges inside and out.

Also, while the 5.7L Hemi and 3.0L EcoDiesel engines are offered with the Trailhawk package, the 3.6L Pentastar V6 with 295 horsepower and 260lb-ft of torque is standard, as is the 8-speed automatic transmission. While the Hemi and the EcoDiesel each offer far more power, those Grand Cherokee buyers who aren’t infatuated with big power will find that the Pentastar is plenty of engine for the Trailhawk…but we will get to that later on in this review. On the inside, the 2017 Grand Cherokee Trailhawk comes standard with the premium UConnect infotainment system with an 8.4” touchscreen which controls pretty much everything in the vehicle from the navigation to the climate control system. The Trailhawk also comes with the reconfigurable driver information center with a 7” inch TFT center screen, push button start, keyless entry, heated/cooled front seats, heated rear seats, a heated/leather wrapped steering wheel, a leather wrapped shifter and plenty of soft, padded leather on the center console and on the door panel armrests.

Everything mentioned above comes standard on the 2017 Jeep Grand Cherokee Trailhawk, but my test vehicle was fitted with a few other items, including the Power Sunroof ($1,095), the Mopar Rock Rails ($900) and the navigation upgrade ($450), bringing the price as tested with destination to $46,435.

A Plush Cabin
Now, to some people that $46k MSRP might be far from a budget price for a 5-seater SUV and to other people, the Grand Cherokee is simply not a luxury SUV because it doesn’t come from a “luxury brand”. However, when you consider the fact that this Jeep has a premium sound system, premium leather seats, a premium driver information center and tons of soft leather throughout the cabin, it is impossible to call this cabin anything but luxurious. When you tie in the fact that you get all of these features for under $47,000, this Jeep a great option for someone looking for premium features without the premium price. The interior of the Grand Cherokee Trailhawk looks great, but it might feel even better. The front seats are nicely padded with plenty of space in every direction, even for very tall drivers and front passengers. The rear seats have your standard middle seat which is best reserved for a smaller child, but the outboard rear seating positions offer a similar level of comfort and space to the front seats. Best of all, there is enough space between the two rows of the Grand Cherokee’s seats that you can comfortably seat four adults for a long drive while still having plenty of space for cargo. For example, the Grand Cherokee Trailhawk could get four guys and their hockey bags to the rink, or four guys and their golf clubs to the links.

The best seat in the house is that of the driver, as the Grand Cherokee Trailhawk has a great driver-centric layout for all of these high tech goodies. By using the buttons on the steering wheel, the driver can change the gauge readouts on the 7” information screen which is nestled between the analog tachometer, temperature and fuel gauges. This screen can display all sorts of vehicle information, navigation information and even the details of what is playing on the sound system – which can also be controlled from the steering wheel buttons. There is also voice commands for the navigation system, but everything that you can adjust inside of the Grand Cherokee Trailhawk is adjusted most easily from the high-mounted touchscreen. While Jeep gives the driver plenty of ways to avoid the touchscreen, including a small panel of buttons and knobs below the screen, the UConnect touchscreen system is one of the most user-friendly – especially when you are moving and don’t want to spend time hunting around on the screen to change the radio station. The Drive
The 2017 Jeep Grand Cherokee Trailhawk comes equipped with a special version of the Quadra-Lift air suspension system and this high tech damper setup is the key to this Jeep being so great on-road and off. When the drive mode is left in Auto, the Grand Cherokee Trailhawk offers a smooth-yet-predictably stiff on paved roads. This is an off-road package, so it rides a little higher and it feels a touch bumpier than the other Grand Cherokee models, but anyone looking for off-road capabilities like those offered by the Trailhawk should expect a slightly stiffer ride. That being said, the daily drive on Detroit’s rough highways is much more comfortable than any dedicated off-road vehicle without adaptive, adjustable suspension so this is absolutely an SUV that can be used to get to and from work every day. However, that is true of all of the current Jeep Grand Cherokee models. They all offer a great combination of capability and ride quality, but where the Trailhawk differs from the rest is in the unique suspension tuning which makes this big Jeep far more capable on rough roads (and off roads).

As I mentioned above, I spent the week taking as many of the rough, unpaved local roads as I could, simulating the daily commute performed by many of my neighbors every day. The temperature was hovering around the freezing mark when I was testing the Grand Cherokee Trailhawk, which makes these roads even worse. In some places, you have hard, slick surfaces which are still frozen while other areas have thawed and turned to mud – sometimes with ice under the mud. It is this type of weather which creates the worst conditions and the biggest potholes on these roads, so my Trailhawk test vehicle really faced the worst that I could throw at it.

At no point did I find an area of mud or a series of potholes which posed any real challenge for the 2017 Jeep Grand Cherokee Trailhawk. The beefy tires on 18” rims made the potholes far more manageable than a larger wheel, so that simple change to a smaller wheel and thicker tire makes the Trailhawk a better vehicle for this type of driving. In a few areas where the ruts and holes were especially deep, I did use the air suspension to go to the highest setting, making sure that I didn’t bottom out, but there were very few situations where the standard ride height of the Grand Cherokee Trailhawk wasn’t enough for these rough local roads.

After spending a few days driving on these roads with the new Grand Cherokee, I spent some time in another, less capable SUV and found that at speeds over 15mph, the rough road was battering the vehicle badly. In the Jeep, I had no issues cruising at speeds well above 15mph without any concern, and in the few places where the road had been flooded with mud – the advanced four wheel drive system allowed me to come and go from the mud holes as slowly or as quickly as I wanted. In other words, on some of the roughest public roads I have in my area, the Grand Cherokee Trailhawk was unstoppable when the roads were at their worst.

Finally, just to see how the 2017 Jeep Grand Cherokee Trailhawk handled even rougher roads, I took my test vehicle down some local private roads which are only used for accessing fishing and hunting spots. These roads run back into the woods and there is little vehicle traffic, so the paths are soft enough to quickly swallow up a large vehicle. I have seen several 4WD vehicles sink on these paths and require the help of a tractor to get to solid land, but the Trailhawk’s 4WD system and suspension setup worked together to make this wooded drive a breeze.

Of course, if you feel that you need the 360 horsepower Hemi V8, you can add that on and stay just below $50k, but for those drivers who don’t have the need for speed – the Pentastar V6 is a great engine for this roomy Jeep. It doesn’t make for the fastest Grand Cherokee, but it packs plenty of power for the rigors of daily driving and it never leaves this big Jeep feeling underpowered.

The Final Word
There are most certainly more off-road-capable SUVs on the market than the Jeep Grand Cherokee Trailhawk (like the Jeep Wrangler), but no other vehicle sold in the USA offers the same level of interior features with such strong off-roading abilities in this price range. The Trailhawk isn’t the best off-roading vehicle in America and it isn’t the most luxurious SUV in America, but among the vehicles of this size under $50 – no competitor offers as much all-terrain luxury as the Grand Cherokee Trailhawk. The 2017 Jeep Grand Cherokee Trailhawk is the perfect vehicle for the driver who wants a premium cabin and a smooth on-road drive with the ability to tackle most off-road settings when the need arises…all for less than $50k.