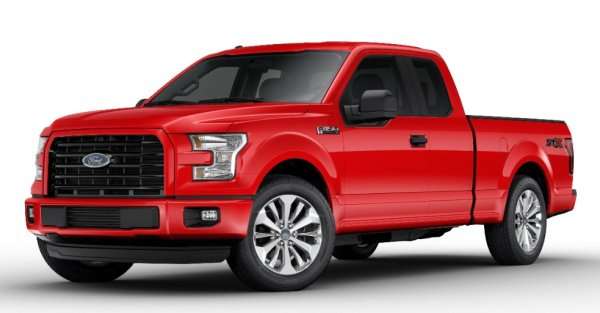 Based on the input from their buyers, Ford Motor Company is introducing a new STX trimline for the 2017 F150 and the Super Duty – a low cost package which adds premium styling features on the outside and a premium infotainment system on the inside.
Advertisement

Building on the success of the aluminum bodied Ford F150, the Motor Company will introduce a new STX trimline for the 2017 model year, but unlike the previous generation STX package - which was only available for the half ton trucks – this new STX option will also be offered on the all-new aluminum-bodied Super Duty. The 2017 Ford F150, F250 and F350 STX models will be positioned just above the base XL models, with a price below the XLT and a handful of features not offered with the XL models.

“STX is for customers who want the utility of an F-Series truck in a stylish, well-optioned package at a competitive price,” said Doug Scott, Ford truck group marketing manager.

2017 Ford F150 STX
The 2017 Ford F150 STX will sit one position above the base model, between the XL and XLT packages for the top-selling half ton pickup. The F150 STX package is available with the SuperCab or SuperCrew configurations, rear wheel drive or four wheel drive and either the 2.7L EcoBoost, the 3.5L EcoBoost or the 5.0L V8. In short, the 2017 F150 STX doesn’t come with the base 3.5L V6 or the regular cab configuration.

The STX packages starts with the base model F150 XL and on the outside, it adds 20 inch aluminum wheels, a black billet grille with a body color surround, body colored front and rear bumpers, privacy glass, STX bedside decals and fog lights. On the inside, the F150 STX includes the SYNC 3 infotainment system with an 8 inch touchscreen, a “flow through” center console, a column shifter and unique black cloth sport seats.

On the outside, the STX package for the 2017 F250 and F350 adds a bright chrome grille, chrome front and rear bumpers, STX fender vent badges, package specific aluminum wheels and bright hub covers on single rear wheel trucks. On the inside, the Super Duty STX package isn’t quite as fancy, but the F250 and F350 STX models do get an AM/FM stereo with a single CD player and MP3 capabilities along with steering wheel mounted cruise control.

The introduction of this package isn’t going to have buyers lining up to make reservation payments, but for the F150, the STX package makes for a much sportier looking truck on the outside while adding a bit of interior technology that, at this point, almost seems necessary. For the new Super Duty, the STX package adds a touch of class for the exterior and a simple sound system on the inside – all for a very low price point.