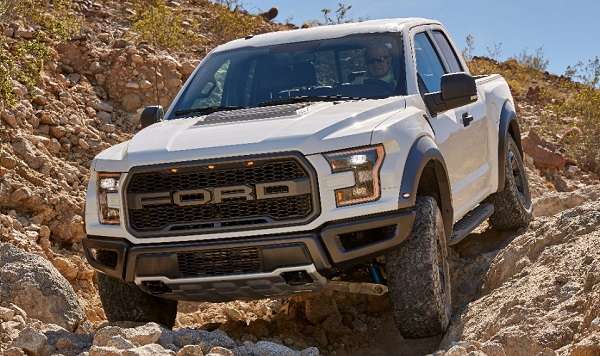 Some pricing figures for the 2017 Ford F150 Raptor have hit Ford’s fleet website, including the base price for the Raptor in SuperCab and SuperCrew configurations as well as pricing for a few packages and options – although we don’t have the details on exactly what is included in said packages.
Advertisement

Ford Motor Company still hasn’t released all of the details on the 2017 F150 Raptor, but since the truck debuted at the Detroit Auto Show in 2015, we have learned a great deal about the newest offroad-ready production truck. We know that the new Raptor will be powered by a 3.5L EcoBoost V6 that is expected to deliver at least 450 horsepower (exact power figures are still unknown) and we know that the power will be sent to all four wheels via a new 10-speed automatic transmission mated to a four wheel drive system said to be the most advanced that Motor Company has ever used. We also know that the new Raptor will ride on tires developed specifically for the high performance F150 and we know that it with feature an advanced drive mode system that should make it a beast in pretty much every driving situation – from paved roads to deep sand.

Today, we also know how much the 2017 F150 Raptor will cost, although this information doesn’t exactly come from Ford. The first bit of pricing was posted on Autoblog with the help of a reader who discovered the information on a Ford fleet website, so while this isn’t “official” – it is as official as it gets without coming directly from the automaker in a press release.

2017 F150 Raptor Pricing
The 2017 Ford F150 Raptor in the smaller SuperCab configuration has a starting price of $49,520, including the $1,195 destination fee. That price will include the high performance 3.5L EcoBoost V6, the new 10-speed transmission, the high performance suspension setup, the unique tires and wheels, the unique exterior appointments and what will likely be a heavily loaded interior.

With the SuperCar only being offered on three trimlines for the 2016 F150 (XL, XLT, Lariat), the new Raptor will likely be the most expensive trimline with the small rear doors.

For those who want more interior space, the 2017 Ford F150 Raptor is also going to be offered with the SuperCrew cab, and that truck has a base price (with destination) of $52,505. The Raptor SuperCrew will likely have many of the same standard features as the Raptor SuperCab, so buyers will end up paying a little under $3,000 extra for the larger cab.

Compared to the rest of the SuperCrew lineup – which is available across all trimlines – the 2017 Raptor arrives as the third most expensive, trailing just the Platinum and Limited models.

Raptor Packages and Options
Finally, the “leaked” information from Autoblog includes some pricing detail on the popular equipment packages and a few options for the 2017 F150 Raptor.

While we don’t know what they will consist of, we know that the 2017 Ford F150 Raptor will have popular equipment group 801A and 802A. 801A costs $3,158 while 802A adds $9,345 to the bottom line. Considering that 802A costs almost $10,000, I would imagine that it will incorporate every interior and exterior gadget available, likely giving the Raptor a far higher end feel throughout the cabin. When 802A is added to the price of the SuperCrew Raptor, this high performance F150 will have an MSRP just under $62,000 before any other options are added on, although I would expect that there are very few features excluded for that price.

In addition to the two popular equipment packages, the 2017 F150 Raptor will also offer a Technology Package for $1,950, but once again, it is unclear what is included in that package.

With the 2017 Ford F150 Raptor set to launch by the end of this calendar year, it shouldn’t be long before the Motor Company finally reveals all of the details on their new high performance truck – but in the meantime, we know that getting one will cost buyers at least $50,000 before any discounts.