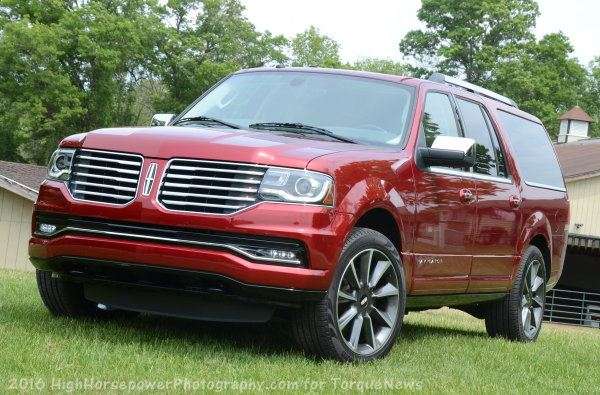 The 2016 Lincoln Navigator L Reserve has all of the credentials to compete for the title of the best large luxury SUV in the US market, but where the competitors will run you close to six figures, the top of the line Navigator offers lots of power, lots of interior space and lots of luxury for less than the starting price of most competitors.
Advertisement

The Lincoln brand doesn’t get a whole lot of attention right now and that is a shame, because they make some very nice luxury vehicles which – in most cases – are less expensive than similarly equipped competitors. The 2016 Navigator L Reserve falls into that category, as it has the majority of the same luxury features as the other large SUVs in the segment, but the Navigator costs tens of thousands less.

My 2016 Lincoln Navigator L Reserve had a base price of $76,650, and when you add in the Ruby Red paint, the power moonroof, the all-weather floor mats and destination fees, the price as tested for this huge luxury SUV was $79,410. That likely seems like a huge price tag for someone who hasn’t looked to purchase a large luxury SUV recently, but the Navigator L is actually quite a bit less expensive than the closest competitors.

For comparison, two of my other favorite large luxury SUVs are the Cadillac Escalade ESV and the Lexus LX570, which start in their base form at $79,565 and $89,380, respectively. When you load up the Cadillac, you are looking at a price tag of $97,695 while the loaded Lexus SUV costs right around $94,790, and while features may vary slightly from one vehicle to the next, the Lincoln is the least expensive of the big, plush luxury SUVs.

The Exterior
On the outside, the 2016 Lincoln Navigator L Reserve shows off its long wheelbase with a relatively understated luxury look. Up front, the Lincoln “wing” grille design is lined with chrome and flanked by a set of LED-trimmed projection headlights. There is also a thin strip of chrome running between the LED fog lights, but along the sides and back – there isn’t much chrome. There is some silver running along the bottom of the side windows and in the door handles, along with running between the huge LED taillights, but the exterior design of the Navigator L Reserve really takes a sportier approach. The black fold-away power running boards are painted black to match the dark lower trim and rather than chrome rims, the Navigator rides on black 22 inch rollers with a machined face. While the 2016 Navigator L Reserve leaves no question that it is a luxury SUV with a touch of chrome and plenty of high tech lighting, the big Lincoln isn’t quite as flashy as some other luxury vehicles – and I like that.

The Interior
On the inside, the Lincoln Navigator L Reserve just screams luxury, starting with the “dune” interior, with light brown seating surfaces, door panels and low dash area complimented by dark leather on the dash, center consoles and door-mounted arm rests – along with dark carpeting. This stark contrast of light and dark colors has become popular throughout the luxury segment, and for good reason, as it looks great. The darker dash upper is easier on the eyes when driving on bright days, but there is no question that the plush, soft, light brown leather has a very luxurious look. More importantly, the Lincoln Navigator L Reserve interior has a very high end feel to it, with plenty of space for adults in all three rows. My test truck was equipped with the 2nd row bucket seats, which reduce passenger hauling capabilities by one, but those rear seats offer more comfort than the 3-person bench. With the addition of the center console, the 2nd row seats offer nearly as much comfort as the front seats and while the 2nd row seats have a little less legroom than the front seats when the drive and front passenger have their seats all of the way back – the Navigator L has plenty of room for very tall adults in the front and 2nd rows. Also, while the 3rd row seating area is a little tight for very tall adults, it has far more functional seating space than many 3-row SUVs. The 3rd row is elevated a bit, so headroom is the bigger concern for taller passengers, but a smaller adult or child will find this rear-most seat to be more comfortable than many 7-passenger SUVs. Finally, when seated in the heated, cooler and power adjusted driver’s seat, you are greeted by the simple system layout of the new Sync 3. MyLincoln is gone, with Sync 3 taking over the infotainment duties in every Ford Motor Company vehicle. This system works in a similar fashion to MyLincoln (or MyFord), but Sync 3 responds quicker to touch input, particularly when spelling out things in the navigation program. Through the touchscreen, you can control pretty much any aspect of the interior functions, but this system also has a spread of knobs and buttons – including the buttons on the steering wheel – to control all of the most common interior functions.

Basically, if you hate using a touchscreen, the Lincoln Navigator likely has a button or knob to adjust the radio or climate control – although the more advanced features will require use of the touchscreen or the voice control. In addition to the steering wheel controls offering easy access to the voice control system and the buttons for the sound system, the Navigator also has buttons on the steering wheel to control the configurable gauge cluster. This cluster is set up in three areas – a vehicle information screen on the left, a large analog speedometer in the middle and the infotainment display screen on the right. The left side screen displays things like engine RPM or other vehicle readouts and fuel levels while the right side displays the navigation information, the sound system information and the settings screen.

Some people will complain about the Ford Sync system being too difficult to use, but I have always like the layout of Ford’s infotainment system and with Sync 3, a good system has gotten even better. The basic function is the same as Sync 3, but there are more gesture controls and the system is more responsive to inputs.

The 2016 Lincoln Navigator L Reserve has one of the industry’s best infotainment systems, a huge interior with seating for 6 adults, comfortable seats and a ton of cargo space – leaving very little to ask for from a large luxury SUV.

The Drive
The 2016 Lincoln Navigator L Reserve is powered by a specially tuned version of the 3.5L twin turbo EcoBoost, delivering 380 horsepower and 460lb-ft of torque to all four wheels via a 6-speed automatic transmission and an electronic transfer case. This is not the most powerful engine in the large luxury SUV segment, but it is bested only in the horsepower category by the Cadillac Escalade, while the torque output is the same. As a result, the Navigator is surprisingly quick from a stop and when you put the hammer down on the highway – like when you are hurrying around a slower-moving vehicle.

Now, when I call the Navigator quick, it should be noted that it is quick for a full sized, extended wheelbase SUV. I don’t imagine that many people are going to take the 6,300 pound hauler to the track, but in terms of everyday driving, the Navigator never feels underpowered. Whether you are accelerating hard from a stop to get a clear shot at a different lane, speeding up to pass a big truck on the highway or just plain pushing the big Lincoln hard because you are running late for an appointment, the Navigator’s EcoBoost engine does a great job of providing the needed power. Also, while the huge SUV isn’t going to be at home on your local road course, the suspension system of the Lincoln Navigator does a nice job of keeping the vehicle planted when cornering. This is obviously a suspension and chassis setup tuned to yield the smoothest ride quality possible even with the 22 inch wheels, but unlike some large luxury SUVs that have that floating feeling while in motion, the Navigator feels nicely planted. Body roll (for a vehicle of this size) is minor on longer turns such as a cloverleaf entry ramp to the highway and for such a large, truck-based vehicle, the long wheelbase Lincoln handles well – but rides even better.

Even on Detroit’s rough highways, the cabin of the Lincoln Navigator L Reserve is whisper quiet, keeping both the wind noise and the majority of the vibration out of the interior. The ride quality is really right on par with what you would expect from a premium luxury SUV, but the handling of this Navigator makes for a far more enjoyable drive than I had expected. Finally, as 6,300lb, 6-passenger luxury SUVs go, the 2016 Lincoln Navigator L Reserve offers solid fuel economy numbers. The EPA expects that my test vehicle will yield 15mpg in the city, 19mpg on the highway and 16mpg combined. In my experiences, driving reasonably on the highway will get you better than 20mpg and that leads to a slightly better combined number of 17.8 – but I did spend more time on the highway than driving around town, so as always, results may vary. However, based on my experiences, the Navigator’s EcoBoost engine can be more fuel friendly if you are gentle on the throttle.

Then again, how many large luxury SUV buyers really care about fuel economy? Not many, so the 20mpg+ capability on the highway is really more of a nice perk for prospective buyers.

The Final Word
The 2016 Lincoln Navigator L Reserve as gobs of space, a premium infotainment system, plush seating for 6 adults, a powerful twin turbocharged engine and a subtle, stylish exterior – just like the other large luxury SUVs sold in the USA. The Navigator isn’t going to blow you away with tons more power than the rivals or features that are not available from the competition, but when you look at what you get relative to the competitors, the price should blow you away. Just like the other large luxury SUVs, the Navigator has all of the aforementioned luxury features, but where it is not like the competitors is in price. While the likes of Lexus or Cadillac will run you up around $100,000 for a similarly equipped vehicle, you can get into the Navigator L Reserve for under $80,000.

That being said, if you are in the market for a large luxury SUV with space for 6 adults and all of the modern interior goodies, there is no vehicle on the market that can compete dollar for dollar with the Lincoln Navigator L Reserve.