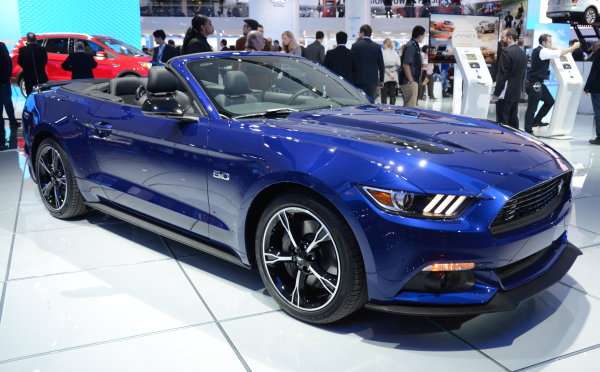 Ford Motor Company announced the 2016 Mustang GT California Special almost a year ago, but at the 2016 Detroit Auto Show, attendees can check out this popular premium upgrade package in person.
Advertisement

The 2015-2016 Ford Mustang has proven to be a smashing success, with sales numbers of 122k+ during the first year proving to be the best for any American muscle car since 2007 – when the Mustang sold more than 134k units. The Chevrolet Camaro hasn’t seen sales like that since the 1980s and with this strong 2015 sales year, the mighty Mustang was able reclaim the title of the bestselling sporty car in America.

However, Ford Motor Company isn’t going to sit back and wait for the Camaro to catch back up with the introduction of the new 6th generation for 2016. Instead, Ford has continued to improve the Mustang lineup – even if only slightly – in an effort to make 2016 a second strong sales year. The most notable aspect of the 2016 Mustang is the fact that the high performance Shelby GT350 and GT350R models will be more readily available, but for those who aren’t interested in a high dollar, road-handling beast – the 2016 GT California Special offers a unique look inside and out.

2016 Mustang GT/CS at NAIAS
At the ongoing 2016 North American International Auto Show in Detroit, the 2016 Ford Mustang GT California Special is a Premium Convertible in Deep Impact Blue and while the GT/CS package is available on both fastbacks and convertibles, it is only available with the GT Premium package.

On the outside, the 2016 Mustang GT/CS Convertible wears unique 19 inch wheels with black painted pockets and a machined face, black painted mirror caps, black painted hood vents with integrated turn signal indicators, a unique faux gas cap, a Ford Performance front splitter, a unique decklid spoiler, unique upper and lower grille inserts with the vintage “Tri Bar Pony Logo” and a set of black stripes on the hood and doors – which you can barely see in the image above.

Finally, there is a little extra performance with this package, as the 2016 Mustang GT/CS gets a unique strut tower brace under the hood that both spruces up the engine bay and improves chassis stiffness when cornering.

Best of all, this new California Special Mustang package really isn’t very expensive, with an MSRP of just $1,995. While many of the components are just “normal” components painted black, the unique leather, the front splitter, the rear wing, the unique 19 inch wheels and the old school style grille make for a nice $2k bundle – while also adding a bit of exclusivity to those new Mustang GT owners who want to stand out in a crowd.