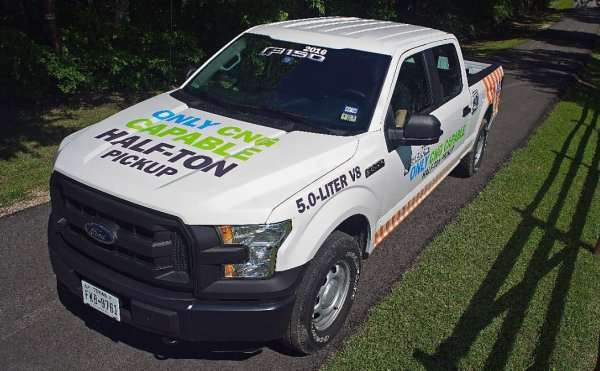 Ford Motor Company has announced that when the 2016 F150 pickups go on sale, there will be an option to upfit the 5.0L V8 to run on propane or compressed natural gas – making the F150 the only truck in the half ton segment that can run on these alternative fuels.
Advertisement

The demand for vehicles that can run on propane and compressed natural gas (CNG) has grown over the past few years and to meet this increased demand, Ford Motor Company continues to add new vehicles to their fleet of hard-working models that can run on these alternative fuels. The newest addition to this list is the 2016 Ford F150, which will have a propane/CNG prep package with the 5.0L V8, so not only do you get the efficiency and the lower cost of CNG and propane, but you get the power and working abilities of the V8 engine.

The 2014 Ford F150 was available with a propane/CNG prep package, but only with the base 3.7L V6. That package was popular enough for the Motor Company to bring it back for the 2016 model year, but the move to the 5.0L V8 could make this a far more reasonable choice for working fleets.

“We surveyed customers likely to use natural gas or propane, and 72 percent told us they want to have these alternative-fuel capabilities available on F-150 with the 5.0-liter V8 engine,” said Jon Coleman, Ford fleet sustainability and technology manager. “We expect the gaseous-fuel prep package will be even more popular than it was on the 2014 F-150 with the 3.7-liter V6 engine, given the capability of the 2016 F-150 5.0-liter V8.”

The CNG/Propane F150 Prep Kit
If you want your 2016 Ford F150 with the 5.0L V8 to run on propane or compressed natural gas, the prep package from the Motor Company costs just $315 and for that price, your 5.0L V8 will have stronger valves and valve seats to handle the different fuels. Of course, this price doesn’t include any of the actual components of the alternative fueling systems so before you can run your new F150 on propane or natural gas, you will need to take it to an upfitting shop where the fuel tanks, the filling setup, the fuel lines and the unique fuel injectors are installed. Ford doesn’t provide any of those components, but the automaker expects that the upfitting process will cost owners anywhere between $7,500 and $9,500 depending on the capacity of the gaseous fuel tanks chosen.

Based on the online prices for the 2015 F150, adding a $9,000 CNG or propane fuel system to an F150 XL 4x4 with the SuperCrew cab and the 6.5 foot box would bring about a total price of $47,780. That price seems high for an entry level trimline with a few options and an alternative fuel system, but for a fleet truck that is seeing major mileage – the price of propane or compressed natural gas can help to offset the high price of the truck.

Why Propane or CNG?
There are two main advantages to having a 2016 Ford F150 with the 5.0L set up to run on propane or compressed natural gas. First, neither compressed natural gas nor propane diminish the power levels or the capabilities, so aside from the reduction in payload capacity due to the added weight of the gaseous fuel tanks, a new F150 with the 5.0L V8 running on CNG can do everything that the same truck can do while running on gasoline. I have not driven the new F150 with CNG, but I have driven another non-Ford product with a V8 engine that ran on CNG. Back in the early 2000s, my university has a fleet of Dodge full sized vans with the 5.9L V8 and I can say that the V8 engine felt every bit as good on CNG as it did on gasoline.

More importantly to some is the fact that both CNG and propane are significantly less expensive than gasoline. Based on a per gallon equivalent for the compressed natural gas, CNG has an average national price right now of $2.11 compared to $2.58 for regular unleaded gasoline and in some parts of the country, CNG is as low as $1.00 a gallon.