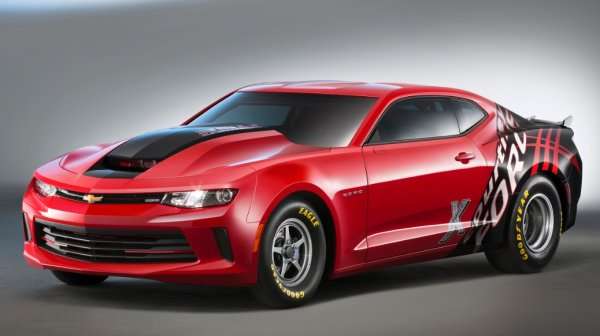 General Motors has rolled out the next generation of the Chevrolet Camaro COPO drag racing package at the 2015 SEMA Show in a custom livery inspired by drag racer Courtney Force – with this unique muscle car headed to auction for charity in the future.
Advertisement

The 5th generation Chevrolet Camaro COPO drag racing package was introduced during the 5h generation in the 2012 model year and the company has built 69 examples of this lightning quick factory setup each year since then, but with the 5th generation coming to an end after the current (2015) model year, it was expect that the COPO name would take a year or so off while General Motors focused on the dealership rollout of the new 6th generation 2016 Camaro road car.

However, last night at a private event in Las Vegas, GM rolled out the 6th generation COPO Camaro drag car with the help of NHRA celebrity Courtney Force, along with dishing the details on the first factory race car based on the new 2016 Camaro. This very car will be auctioned off by the folks at Barrett Jackson, with proceeds going to benefit the United Way.

“With the new Gen Six Camaro as its foundation, the 2016 COPO Camaro begins the next chapter of an historic racing legacy,” said Jim Campbell, Chevrolet U.S. vice president of Performance Vehicles and Motorsports. “It’s great to have Courtney Force on Team Chevy and to work with her on the design of the new COPO Camaro show car. Most important, her effort will help raise money for a great cause.”

The 2016 COPO Camaro
As has been the case each year since the COPO Camaro was introduced at SEMA for the 2012 model year, production of this factory drag racing package will be limited to just 69 units and they will not be legal for road use. Like the previous years, there will be a lottery-type selection process to see who gets to buy one of these 69 2016 Camaro race car and, like previous years, there is a group of different engines offered for the new COPO Camaro – with both supercharged and naturally aspirated packages that will allow the new COPO to fit into a variety of NHRA and IHRA racing classes.

The Courtney Force COPO Camaro shown here and destined for a charity auction block in the near future is powered by the Whipple-supercharged 350 cubic inch LS-based V8, which sends an estimated 570 horsepower to the rear wheels by means of a purpose built drag racing transmission and heavy duty rear differential. GM estimates that this new Camaro will blast down the quarter mile in the mid 8 second range thanks to a curb weight under 3,000 pounds.

In addition to the supercharged 350, the 2016 COPO Camaro will also be offered with a trio of naturally aspirated V8 engines, including a 350 cubic inch version, a 396 cubic inch version and the biggest engine offered in the 2016 COPO Camaro – the 427 cubic inch V8. GM hasn’t offered any ET estimates on these NA engines, but we can expect them to be in the 9 and 10 second range, depending on the stock-based class chosen by the drivers piloting these cars.

GM hasn’t explained exactly when the 2016 Chevrolet Camaro COPO will reach those lucky 69 new owners, but we are likely to see this special debut car hit the Barrett Jackson auction block well before the cars begin shipping.

“I was extremely honored to work with Chevrolet and help design the 2016 COPO Camaro we unveiled today at the SEMA show,” said Courtney Force. “The bright red color and the signature slash marks towards the back on the car bring a part of my Traxxas Chevrolet Camaro Funny Car to the COPO Camaro, which I think is really cool. The proceeds from this car go to a great cause and benefit the United Way Foundation, so it's an awesome project all around."