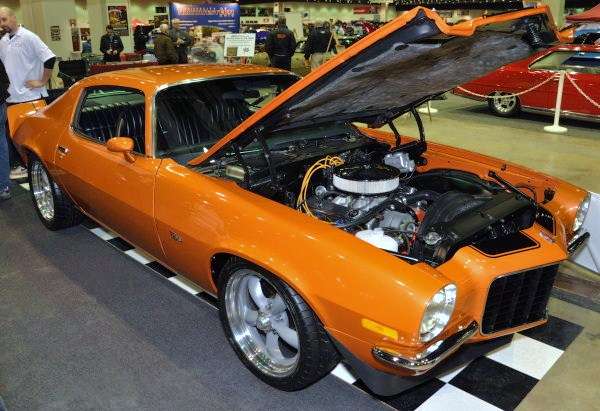 Since we began talking about the 6th generation Chevrolet Camaro coming for the 2016 model year, it has been expected that it would look like a revised version of the 5th generation models, but a new rumor indicates that it could undergo a more substantial exterior refresh that could have styling more similar to that of the second generation Camaro.
Advertisement

A few months back, discussions about the 2016 Chevrolet Camaro all suggested that the 6th generation GM muscle car would look more like a redesigned 5th generation Camaro rather than an all-new model. That belief was supported by insider information that explained that the 2016 Camaro would indeed look like a restyled 2010-2015 model and it seems that we all just moved on to discussing spicy things like the arrival of the C7 Corvette’s new LT1 V8. However, the newest rumors on the 2016 Camaro suggest that it will indeed get a more substantial physical change – one that will look more like the 2nd generation model while the current Camaro is designed to look like the1st generation Camaro.

New Platform Could Mean a New Shape
The 6th generation will be introduced with the 2016 Chevrolet Camaro and this new generation will ride on the same Alpha chassis platform as the new Cadillac ATS and CTS sedans. While we had expected that the 2016 Camaro would ride on the shorter chassis of the ATS, it seems that it will actually ride on the larger CTS version. This means that the 2016 Camaro will be a little longer and possibly a new narrower than the current models and based on that, you really have to wonder if General Motors will try to apply the same basic aesthetic design to a car that has different proportional dimensions.

In 1970, General Motors introduced the new Chevrolet Camaro that brought in the 2nd generation of their popular performance car. The 1970 Camaro had a longer, lower and more slender look than the 1969 models and with the 2016 Camaro riding on a chassis that is longer and possibly narrower side to side, it would almost make sense for the next generation Camaro to gain its styling inspiration from the 2nd gen Camaro that dropped for 1970. The Camaro shown above is a 1973 model, but it has a similar basic shape to the 1970 model and all of the second generation models. It is the face of the Camaro shown above which many now believe could grace the face of the 2016 Camaro.

1970 Design Inspiration Wouldn’t Be a Bad Thing
If there is one thing that is almost a guarantee within the muscle car segment, it is that consumers eat up any kind of old school tie-in with new models. Over the past decade or so, whenever the Chevrolet Camaro, Ford Mustang or Dodge Challenger introduced a feature based on a vintage model, the consumer market has happily pounced on the opportunity to own the modern take on a classic look. The 2010 Camaro was designed with inspiration from the 1st generation model, so a 2016 Camaro with some design cues from the 1970-1981 models seem like a logical step – especially when you consider the fact that the new chassis platform would comfortably cater to that similar longer, more streamlined feel.

John Goreham wrote on July 7, 2014 - 2:13pm Permalink
Two words - Round taillights. :)
Cheryl Landin wrote on March 2, 2016 - 9:56pm Permalink
I am a 69 camaro buff, I believe would sell more camaros had Chevrolet chosen to go with the 67-73 body style, preferably 69. If it is not broke don't fix it. Stick with what works and with muscle cars that is the older body styles.