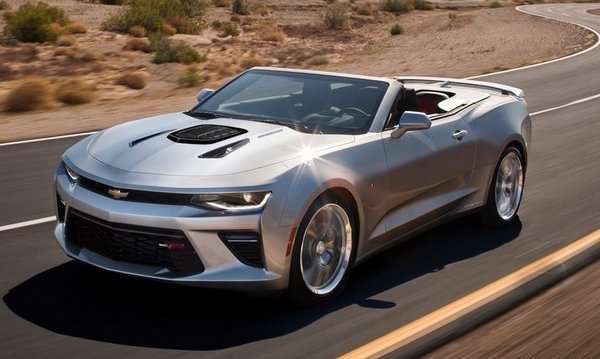 The high performance tuning experts have gotten their hands on a 2016 Chevrolet Camaro SS and the results are impressive – with promises of more than 600 horsepower with this simple supercharger package.
Advertisement

In the world of General Motors high performance, few names are as recognized and respected as that of Callaway – a Connecticut-based firm that has made a name for itself building crazy-fast race cars and street cars. Callaway was quick to roll out their supercharger package for the C7 Corvette Stingray back in 2014 and it comes as no surprise that the company has already put together a high performance package for the 2016 Camaro SS – with power levels that could be in the area of 627 horsepower and 610lb-ft of torque.

The Callaway 2016 Camaro SS
The 2016 Chevrolet Camaro SS is powered by the same 6.2L LT1 V8 which motivates the C7 Corvette Stingray, except the Camaro offers slightly lower official power numbers of “just” 455 horsepower and 455lb-ft of torque. That makes the 2016 Camaro SS the quickest, the fastest and the most powerful factory-built Camaro to sport the SS badging, but for some people, enough is never enough. If you are one of those people, the Callaway supercharger package for the 2016 Camaro SS could be the answer to your problem.

Like the Callaway package for the 2014+ Corvette Stingray, the system for the 2016 Camaro SS uses their 2.3L “CoolRam 2300″ Supercharger. This setup uses a triple intercooler setup and a high flow intake to feed tons of cool, compressed air into the new LT1 and as a result, the power is increased greatly.

Callaway hasn’t announced official power figures for the 2016 Camaro SS package, but a similar setup on the Corvette Stingray yields an output of 627 horsepower and 610lb-ft of torque. The Corvette package includes an exhaust system which the Camaro package seems to exclude, but that shouldn’t have a massive impact on the performance figures so while the Callaway Corvette might make slightly more power than the Callaway Camaro – the difference should be very minimal. Callaway is promising at least 600 horsepower and my safe money says that the actual number will be closer to that of the blown Corvette.

Cost and Other Features
While the supercharger system and more than 600 horsepower are the key components of the 2016 Callaway Camaro SS, this package also includes the Callaway see-through hood design which shows off the supercharger and a collection of badges inside and out. Finally, the supercharged Camaro gets package specific key fobs and a 3 year, 36,000 mile warranty. Oh, and this setup is available with both the 6-speed manual and the 8-speed automatic transmission.

The Callaway supercharger package for the 2016 Chevrolet Camaro SS is on sale now, so if you are one of the early 6th gen Camaro buyers and you’ve not started modifying your new muscle car yet – the Callaway package could be a great place to start building big power.