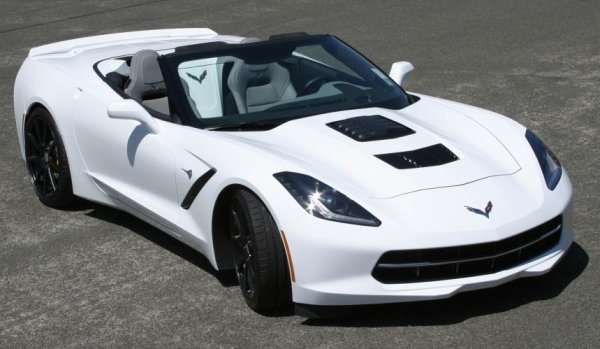 The folks at Callaway have announced the official specs for their 2014/2015 Chevrolet Corvette Stingray package and for around $23,000, the Callaway Corvette packs an incredible 627 horsepower and 610lb-ft of torque – coming in a touch under the Z06 in power while likely costing far less.
Advertisement

Callaway announced a few months back that they were in the process of designing a supercharger package for the 2014 and 2015 Chevrolet Corvette Stingray that would deliver at least 620 horsepower and 600lb-ft of torque. However, now that the company has announced the official figures, we are happy to report that the initial figures were both underestimated. The Callaway Corvette Stingray package offers 627 horsepower and 610lb-ft of torque – making it massively more powerful than the standard Stingray and just a touch less powerful than the 2015 Z06. Best of all, this package “only” costs $22,995 (plus the price of the Corvette Stingray) so you can have a 600+ horsepower Corvette for a price that is likely far below the upcoming Z06.

Big Power for a Not So Big Price
The 2014 and 2015 Chevrolet Corvette Stingray coupe and convertible are powered by the new 6.2L LT1 V8 that delivers 455 horsepower and 460lb-ft of torque in stock form (without the performance exhaust option). You can get one of these new Corvette coupes for as little as $57,995 in 1LT form with the Z51 Performance Package and if you are going to buy an aftermarket kit that gives you 627 horsepower, you should probably have the best handling possible.

Callaway then adds their “CoolRam 2300″ Supercharger System with triple intercoolers, a high flow intake system, a high flow exhaust system and a performance engine calibration that increases the output to 627 horsepower at 6,400rpm and 610lb-ft of torque at 4,400rpm. The Callaway Corvette package also comes with a 3 year, 36,000 mile warranty on the engine components, but that warranty is voided if you perform any more modifications to the engine after having the Callaway blower setup installed.

The price of this package, which also includes unique badging, the supercharger trim ring on the hood and anodized door sills, is just $22,995. When added to the cost of the donor Corvette, the Callaway Stingray carries a base price of $80,990. It should be noted that if you don’t care about handling, you can knock about $4,000 off of that price by starting with a Corvette 1LT without the Z51 package.

The Callaway Corvette Stingray is a Bargain Z06 Alternative
General Motors hasn’t announced the pricing for the 2015 Chevrolet Corvette Z06 yet, but there have been hints that it will have a price in the same range as the C6 Corvette ZR1 – which started around $125,000. The 2015 Z06 will pack 650 horsepower, 650lb-ft of torque and a handful of unique chassis and handling components that will allow it to outperform the Callaway Corvette Stingray. However, the Z06 will cost some 50% more so those hopeful Corvette owners who want more performance than what is offered by the standard Stingray without the six figure price of the Z06 might find the Callaway Corvette to be a very intriguing possibility.

Those who want an even more engaging buyer’s experience can opt for the free Callaway factory delivery, the National Corvette Museum delivery, a handful of tire and wheel packages and an extended 5 year, 100,000 mile warranty.

Callaway is building and delivering cars right now so if you have a 2014 or 2015 Corvette that needs 627 - contact Callaway right away.