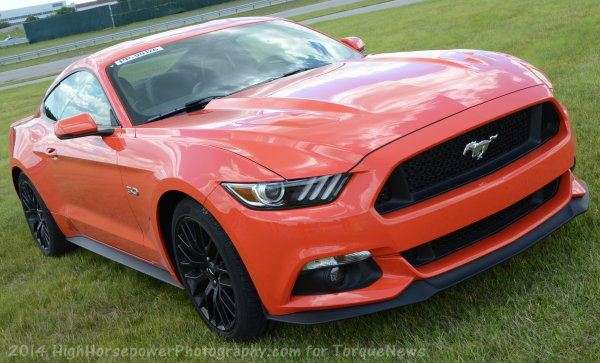 The North American Car and Truck of the Year jury has announced the finalists for the 2015 awards with the 2015 Ford Mustang and 2015 Ford F150 leading the charge for the Motor Company, but there are some other very good vehicles giving Ford a run for their money.
Advertisement

This is the 22nd year for the North American Car/Truck of the Year awards and after watching General Motors take both of the 2014 titles with the Chevrolet Camaro and the Chevrolet Silverado, Ford Motor Company would love to answer with a double win of their own. Fortunately for Ford, three of the six finalists for the 2015 awards are from the Motor Company while GM, Hyundai and Volkswagen each have one vehicle in the running.

The finalists for the 2015 North American Car and Truck of the Year are:
Cars:
Ford Mustang
Hyundai Genesis
Volkswagen Golf/GTI

The Car of the Year Finalists
The 2015 Ford Mustang has been the most talked about car in America over the past year, but it faces tough competition from the Hyundai Genesis and the Volkswagen Golf/GTI. The Golf has already won a handful of awards around the world and while it might not get the attention of the Mustang, the Golf is one of the world’s most popular cars for a reason. On the other hand, the new Hyundai Genesis sedan is a stunning new look at Korean luxury, offering amenities that are more commonly found in European luxury cars that cost tens of thousands more. Of course, the 2015 Mustang is the newest generation of the great American pony car and, honestly, I would be blown away if the Mustang didn’t take the car class.

The VW is a great compact and the Genesis is a beautiful luxury sedan – but the Mustang is the Mustang and as the best Mustang ever, it seems like a no-brainer to me.

The Truck of the Year Finalists
I expect that the competition will be a whole lot tighter over in the Truck of the Year battle, particularly between the Chevrolet Colorado and the Ford F150. The new Colorado brings a whole new level of capabilities and efficiency to the midsized truck segment and for that, the smaller Chevy has become more heavily praised than the larger Silverado. The new Ford F150 is better than the previous generation F150 in every way and in being better than the bestselling truck in America, you would think that it would be an easy pick. However, the Colorado has already beaten the new F150 for Motor Trend’s Truck of the Year and with so many journalists shying away from the aluminum body – Chevy could prevent the double win by Ford in claiming the Truck of the Year title.

If not for the absurd stigma against the aluminum panels on the 2015 F150, I would expect to see the Ford to cruise to the win, but the reluctance to accept the new aluminum panels gives the Colorado a very real chance of winning.

Of course, there is also the new Lincoln MKC and if not for such strong competition from the Colorado and F150, I would think that the MKC has shot at the win. Aside from the awkward commercials, the MKC is a flawless machine and – in my opinion – it is the most exciting small SUV I have ever driven. Unfortunately for Lincoln, I would be pretty surprised to see the MKC beat the Colorado and the F150.

The 2015 North American Car and Truck of the Year award winners will be announced next month at the 2015 Detroit Auto Show.