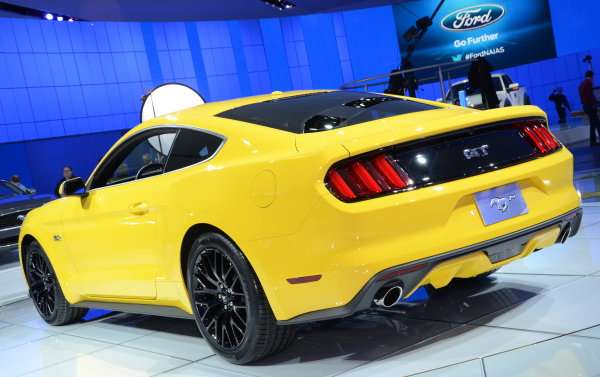 While there still aren’t “official” weight figures for the 2015 Ford Mustang, the folks at Mustang6g have gotten a hold of information said to be from dealership information and while these numbers are a little higher than the figures for the 2014 models – the 2015 Mustang weighs significantly less than what the rumors suggested.
Advertisement

When it was announced that the 2015 Ford Mustang would have independent rear suspension and a host of new safety features inside and out, it was widely expected that the S550 would weigh at least a little more than the S197 Mustang that is in showrooms today. Some people speculated that the next generation Mustang would have a curb weight closer to that of the current Chevrolet Camaro and when Steeda posted on their blog that the 2015 Mustang would weigh about 300 pounds more than comparable current models, it seemed that the new Mustang could actually challenge the Camaro in the weight category.

I doubted that the 2015 Ford Mustang would gain that much weight and according to the information from Mustang6g.com, I was right. The inclusion of the more modern independent rear suspension in tandem with a great many other new features inside and out did indeed add some weight, but nowhere near the amount that some people were expecting. Should these numbers prove to be official, the 2015 Mustang is still going to have a pretty strong advantage in power to weight ratio – even if the engines don’t get much of a bump in power over the 2014 model year.

Below is a comparison of the approximate curb weights for the 2015 Ford Mustang and the similar 2014 Mustang. The EcoBoost models are listed last because this is a new option for 2015.

Again, these numbers aren’t official figures from Ford Motor Company, but the folks at Mustang6g.com haven’t been wrong with any of their leaked information thus far, so there is no reason to question these numbers. Provided that they are fully accurate, the company won’t need to add much power to afford the 2015 Mustang the same (if not better) power to weight ratio as the outgoing models…while also offering the lowest curb weights in the segment.