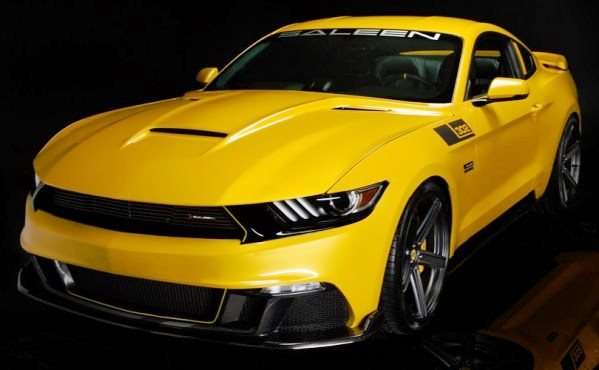 There are few names in the high performance Ford Mustang world more respected for their go-fast capabilities than Saleen Automotive so it should come as no surprise that the new Saleen S302 Black Label based on the 2015 Mustang GT is one of the baddest ponies on the block – with 730 supercharged horsepower ready to tackle the Dodge Challenger Hellcat.
Advertisement

The 2015 Ford Mustang is one of the most important performance cars in the history of Ford Motor Company, as it is one of the first marketed on a global level and it is THE first Mustang to be built for right hand drive markets. With the global impact of the 2015 Mustang, it should come as no surprise that the Mustang-tuning experts were quick to roll out high performance packages and it looks like the newest Saleen S302 Black Label is the nastiest option for the next gen pony car.

The Saleen S302 Black Label version of the 2015 Ford Mustang GT has a unique aerodynamics package, unique wheels, big brakes, a high performance suspension package and a supercharger kit that raised the output up to 730 horsepower and 600lb-ft of torque.

"From the beginning of this project, we have always known that we wanted to create the most powerful production Mustang we have ever built", said Sven Etzelsberger, Saleen’s V.P. of Engineering. "I can happily say that we have accomplished this goal with great success."

The Exterior Upgrades
The Saleen S302 Black Label package for the 2015 Ford Mustang GT begins on the outside, where Steve Saleen’s team has added a unique hood, front fascia, side skirts, rear spoiler and lower rear fascia, effectively lengthening the car by an inch up front and two inches out back. Overall, this body kit helps to improve aerodynamics substantially while the use of carbon fiber components helps to keep the weight down. When combined with the Saleen grille, the Saleen 20 inch wheels, the rear Saleen taillight panel and the model specific badges, the 2015 Saleen S302 Black Label Mustang sports a very aggressive appearance that will allow this beast to stand out in any crowd.

The Moving Parts
While the exterior of the 2015 Saleen S302 Black Label Mustang is both attractive and functional, the key to this car’s beastly nature is what you really cannot see. Sure, you can see the big brake package through the 5-spoke wheels, but what you cannot see is the Saleen S4 suspension package that adds new springs, shocks, sway bars and bushings all around. Also, Saleen has added a supercharger package to the 5.0L V8 that lifts the output from 435 horsepower and 400lb-ft of torque to a whopping 730 horsepower and 600lb-ft of torque. Also, according to the folks at BestRide.com, it was announced during the Saleen press conference that when you run the S302 Black Label on higher octane race fuel (specifically 95 octane or higher), the output rises to 750 horsepower.

Considering the lightweight nature of the Saleen package, there is a very good chance that the new S302 Black Label will give the new Hellcat Dodge Challenger a run for its money. Best of all, the newest and most powerful Saleen Mustang has a price that starts at $73,214, making it only slightly more expensive than the 707 horsepower Challenger.

Tesla Contemplates A New Strategy for China Retail even As Sales Boom
Jay Leno on Elon Musk & EVs: “I Think He Should Get ... Credit"
END_OF_DOCUMENT_TOKEN_TO_BE_REPLACED