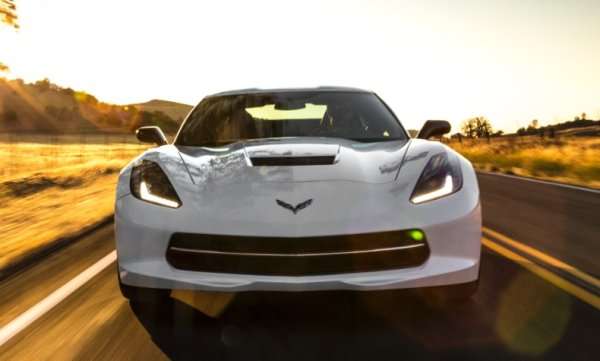 2015 Chevrolet Corvette Stingray #1 to be Auctioned for Charity

The proceeds of the auction for 2015 Corvette Stingray #1 will go to benefit the CARE House of Oakland County – an organization that helps to stop child abuse and help those kids who are in bad situations.

While the auction setting will open the chance to own the very first ever Corvette with an 8-speed transmission, it will likely go for a very high price and that will cut down the number of people who have a real shot at winning the bidding war. One man who everyone will be watching is NASCAR owner and well-known car collection Rick Hendrick, who has purchased every other first unit auction pertaining to the C7 Corvette Stingray. Mr. Hendrick has the money to outbid just about anyone else who shows up and with his current collection of new Corvettes, I would call him “one to watch” during the 2015 Stingray #1 bidder.

2015 Corvette Stingray Fastback VIN #001
The Barrett Jackson website has some information on the first 2015 Chevrolet Corvette Stingray intended for sale, but that information is incomplete – and probably inaccurate. There is no mention of interior or exterior color and the details state that it will have a 650 horsepower supercharged V8. That is the Z06 engine while the actual auction car will be powered be the LT4 V8 with 460 horsepower.

Fortunately, the folks at Corvette Blogger have an inside line on the first retail production 2015 Corvette Stingray and in addition to the 8-speed automatic transmission, we should expect this charity car to have an Arctic White exterior, an Adrenaline Red interior and it will be a top of the line 3LT trimline with the Z51 package. In a dealership, this car would sell for around $72,000, but I expect to see this charity auction for the first 2015 Stingray to reach up and beyond the half million dollar mark thanks to wealthy, generous collectors like Mr. Rick Hendrick.

A Look at Rick Hendrick’s Charity Auction History
In the past year, NASCAR owner Rick Hendrick has been quite busy snatching up first-unit vehicles and making massive contributions to the various charities which benefitted from those auctions. Below is a list of just some of those cars, the price that Mr. Hendrick paid for them and which charity the money benefitted.

When you add up all of those numbers above, Rick Hendrick has bought $4,610,000 worth of first unit GM vehicles (not including whatever he paid for the first 5th gen Camaro Convertible) and all of that money has gone to charity.

While there is no guarantee that Hendrick will take home 2015 Corvette Stingray #1, it will take a collector with more money than one of the most successful team owners in NASCAR history to outbid the devout GM lover.