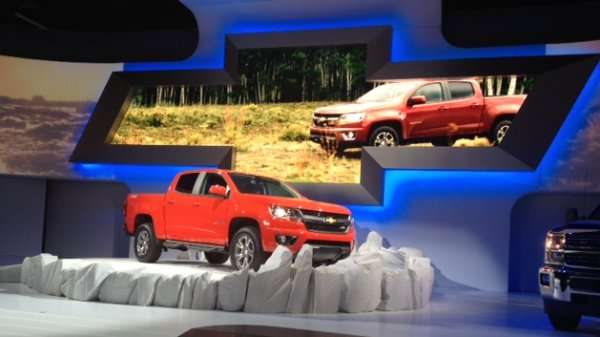 General Motors continued to beef up their truck lineup at the 2013 LA Auto Show with the debut of the new 2015 Chevrolet Colorado – a midsized pickup that looks primed and ready to take on the popular midsized trucks from the Japanese competitors.
Advertisement

While General Motors, Ford Motor Company and the Chrysler Group comfortably dominate the full sized truck segment, their smaller models including the Chevy Colorado, the Ford Ranger and the Dodge Dakota have generally fallen short of really competing with the likes of the Toyota Tacoma and the Nissan Frontier. Sales of these small trucks were minimal enough that both Ford and Dodge killed off their smaller trucks but at the ongoing Los Angeles Auto Show, General Motors introduced the 2015 Chevrolet Colorado – showing that not only are they not leaving the segment but they are coming at it full force.

The previous Chevrolet Colorado may have fit the dimensions of the midsized truck segment but for all intents and purposes, it was simply a cheap little truck. Those folks who don’t really need a truck or much interior space but occasionally like to have a bed without paying “full size truck prices” likely found the Colorado (and its cousin the GMC Canyon) to be ideal options but the same is true of both the Toyota Tacoma and the Nissan Frontier. The problem for the Colorado was that it wasn’t particularly stylish on the outside and it wasn’t particularly nice on the inside.

The 2015 Chevrolet Colorado looks to exorcise those demons and just based on the exterior design of this new midsized truck, that mission has been accomplished. Where the previous Colorado had a smallish stature…looking almost apologetic in its exterior design, the 2015 Colorado has a big, bold design for a smaller pickup. Surprisingly, the new Colorado doesn’t look much like the new Silverado with the most noticeable difference being the lack of the “stacked” headlight design. The previous Colorado helped to introduce that over/under design that was adopted by the new Silverado but the 2015 Colorado goes to a sharp looking single lens setup that flows into the large central grille opening. Also, where the old Colorado had a very low riding, untruck-like stance, this new Colorado (at least in the Z71 trim shown here) has a proper high riding stance that we see from the Japanese competitors.

Finally, while the front end of the 2015 Chevrolet Colorado doesn’t look anything like its bigger brother, the back end is remarkable similar with comparable taillight design and a similar yet smaller rear bumper with an integrated corner step feature. The new Colorado also has a 6 foot bed that will accommodate 8 foot items with the tailgate down so in addition to looking great, this new midsized pickup can haul many of the same larger items as the half ton truck segment – especially those which come with beds that measure less than 6 feet long.

"Our strategy is simple: meet the needs of the broadest possible customer base, and let them choose precisely the right truck to meet their needs," said Mark Reuss, GM president of North America. "The all-new Colorado benefits from the solid foundation established by the Silverado, and it reinvents the midsize truck, while reinvigorating the segment at the same time."

On the inside, the 2015 Chevrolet Colorado has a layout that appears to be very similar to the Silverado with a very clean design and plenty of high tech goodies including a big, bright touch-based infotainment system so not only will the new Colorado look great on the outside – it will offer interior technology that is unrivaled by the Toyota and Nissan midsized pickups while the spacious cabin will comfortably seat 4 adults.

The 2015 Chevrolet Colorado will come with a standard 2.5L 4-cylinder engine that delivers 193 horsepower and 184lb-ft of torque while the optional 3.6L V6 increases the output to 302 horsepower and 270lb-ft of torque. The biggest bit of news on the drivetrain of the 2015 Colorado is that there will be a 2.8L turbocharged diesel engine coming for the 2016 model year and that mill will likely be more powerful than the base 4-cylinder in both horsepower and torque while also being vastly more efficient than either of the two gasoline engines.

The 2015 Colorado will be offered in WT, LT and Z71 trims and we can expect both pricing and fuel economy figures to be announced down the road – presumably much closer to the expected launch date of the new GM midsized pickup. When it does arrive, I would expect the new Colorado to steal some attention from the Toyota Tacoma and the Nissan Frontier as this new Colorado appears to integrate the capabilities of a proper midsized truck into a great looking package that should receive a far friendlier reception from the American consumer market.

Click any of the thumbnails on this page for a closer look at our 2015 Chevrolet Colorado gallery!