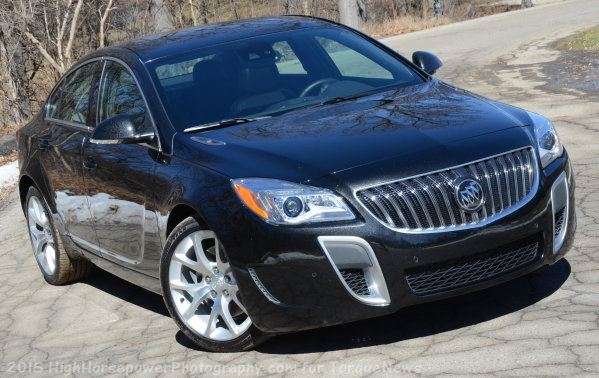 2015 Buick Regal GS Review: The Most Exciting Buick in Decades

The 2015 Buick Regal GS is a stylish, fun to drive sedan with a turbocharged 4-cylinder engine, an advanced all-wheel drive system and a cabin that is packed to the hilt with premium amenities so while the Regal GS might not be the modern Grand National that many had hoped for – this is still the most exciting new Buick in decades.
Advertisement

Shortly after the modern Buick Regal was introduced, the General Motors performance community began calling for a new high performance version. They wanted a fresh take on the Buick Grand National of the mid 1980s, which was a 2-door, rear wheel model that derived its power from a turbocharged 3.8L V6. Of course, with the modern Regal being a midsized 4-door sedan available in either front- or all-wheel drive, a true redeux of the Grand National is impossible, but the 2015 Buick Regal GS is a great modern representation of the Buick that dominated the performance scene in the 1980s.

Really, the 2015 Buick Regal GS is nothing like the 1986 Buick Regal Grand National, but even in totally different form, the new Regal GS offers the fun to drive factor of the old school turbo Buicks while including a roomier, more luxurious interior and an all-wheel drive system that provides sure footing in any driving situations.

The 2015 Buick Regal GS carries a base MSRP of $39,810, but when you add the Driver Confidence #1 and #2 packages, the power moonroof, the Black Diamond Tricoat exterior paint and the destination fee, the price of test of the car shown here rises to $44,965. However, if you don’t want the gadgets of the confidence packages, you don’t care about the moonroof and you are happy with one of the “free” exterior colors, you can get this spirited Buick for $40,735.

The Exterior
The modern Buick Regal has a very sporty exterior design, but the GS package takes it to the next level. This starts up front, where the lower fascia that you find on the rest of the 2015 Regal models has been removed to make room for a vastly more aggressive look with large ducts running vertically along the grille and another set of vents located in front of both wheel openings. This aggressive exterior continues on the side of the Regal GS, where unique 19 inch wheels with a bright silver finish are wrapped in performance tires and out back, the GS package adds another unique fascia. Rather than the simple rear end that you find on most new Regal sedans, the GS has large integrated exhaust openings in the lower fascia with big silver bezels.

Finally, the Regal RS has the same projection headlights and LED taillights that find on the entire 2015 Regal lineup, but these high tech lights work perfectly with the sporty design of the GS exterior package. In my opinion, the front and rear fascia swap makes the GS the best looking of the modern Regals by a long shot and based on nothing else, the look of the GS makes this my favorite new Regal. Fortunately, the exterior design is only the tip of the iceberg here.

The Interior
The entire modern Buick lineup is showcase of affordable luxury, so even though the 2015 Buick Regal GS is a performance model, it still has the interior features that make the entire brand so impressive. The vast majority of the cabin is cloaked in black leather and aside from the subtle silver accents scattered throughout, almost everything inside of the Regal GS is black, creating a sporty-yet-styling environment. This begins with leather sport seats up front that look the part of a proper sport sedan seat, with deep hip and side bolsters to keep the driver and passenger planted during stints of spirited driving. These seats feature heated surfaces and 8-way power control, allowing drivers and passengers of all sizes the ability to adjust the seat to the most comfortable position. Even though this is a relatively small looking car from the outside, the front seats offer an impressive amount of leg, shoulder and head room, although having two very tall adults up front may cause some jockeying for elbow space on the thin center armrest.

The rear outboard seating positions have a comparable design to the fronts, except with much shallower bolsters and no heated surfaces. These seats are very comfortable for shorter adults or children, but taller adults might find the rear legroom to be a little tight – especially a tall driver and front passenger. That is probably one reason that Shaq is the spokesman for the LaCrosse and not the Regal, as his basketball buddies would have a tough time fitting in the back seats. However, there is plenty of space for the average family of four. General Motors has positioned Buick between Chevrolet and Cadillac – offering near-premium amenities without the premium price, and that includes plenty of high end infotainment features that are all integrated into the big, bright touch screen mounted high on the dash. This system includes the navigation, the stereo system, the hands-free phone system and the various vehicle settings, with the touch screen putting the power at your fingertips. Fortunately, for those folks who aren’t keen on touch screens, the Regal GS infotainment system includes a panel of buttons and knobs located just below the screen as well as a wide variety of buttons on the sporty 3-spoke steering wheel. Also, while the climate control system can be accessed through the infotainment screen, the Regal has a panel of buttons and touch-panels that allow you quick control of the heating and air conditioning system without needing to flip through the touch screen menus. Finally, in addition to offering the driver easy access to the infotainment controls, the buttons on the steering wheel also allow you to switch between the different options for the customizable center section of the gauge cluster. The outer portion of the gauge cluster has fixed gauges for engine RPM, engine temperature and fuel level, but the large center speedometer can be adjusted and flanked by a variety of other readouts based on the driver’s preferences.

The Buick Regal GS might be a sport sedan, but the interior feels far more like a luxury car than anything else, with plush sport seats, high end infotainment technology and comparable seating space to what you will find in other midsized sedans.

The Drive
The 2015 Buick Regal GS is powered by the same 2.0L 4-cylinder mill that is offered elsewhere in the Regal lineup, with 259 horsepower and 295lb-ft of torque being delivered to all four wheels via a 6-speed automatic transmission and an advanced all-wheel drive system. This drivetrain affords the Regal GS very strong acceleration capabilities when you are looking to let the Buick flex its muscles, but when you are snow-covered roads, the AWD system will help you get from point A to point B safely. Best of all, thanks to the design of the all-wheel drive system, the GS can send up to 90% of the power to the rear wheels, giving this Regal the feel of a hard-charging rear wheel drive model with the added grip of an AWD sport sedan. Turbo lag is practically non-existent, so when you stomp on the gas from a stop, the power quickly hurdles you forward in a hurry. Also, when cruising on the highway, putting the pedal to the floor brings about an instant blast of power, allowing the Regal GS to easily slip past any posted speed limit as you hurry around slow moving traffic. The drivetrain of the 2015 Buick Regal GS is not specific to this package, but the GS does include the Interactive Drive Control system, unique HiPer strut front suspension and four-piston Brembo brakes to improve performance in almost every area when compared to the non-GS Regal. The Interactive Drive Control system allows the driver to select from a few different modes that adjust the steering, throttle input, suspension feel and shift points for improved performance and a sportier feel whether you are rocketing away from a stop light or carving through the tight turns of a twisty back road. This setup gives the driver a great deal of road feel through the steering wheel with appropriate feedback under hard cornering while the HiPer strut setup helps to cut body roll to a minimum- even when you are attacking the corners. Also, thanks to the Brembo front brakes, the Regal GS gets down from high speeds very quickly, so in the event that you run too deep into a corner, the brakes will bail you out. Best of all, thanks to the Interactive Drive Control system, you can comfortably drive the 2015 Buick Regal GS every day without any compromise of comfort. While the GS mode will stiffen up the shifts, the steering and the suspension damping, leaving the Regal in its normal settings makes the Regal GS as calm and as comfortable as any midsized sedan in the segment. This way, you can push a couple buttons and have a sport sedan that will blast away from the starting line and cruise through the corners when you want to do that, while still offering the ride quality that you would expect from a midsized luxury sedan during normal driving circumstances. Honestly, I found that the GS mode was not harsh enough for passengers to even notice, so were I to own a new GS, I would just keep it in the highest performance mode – but for those folks who want a more sedate drive during the morning rush, the Regal GS has a solution. When driving gently around town, the Buick Regal GS is as quiet and smooth as any car on the road, so in getting the driving attributes that make the GS so much fun to drive, you don’t have to compromise any ride quality for daily driving. Also, when not being driven like a performance car, this turbocharged/AWD drivetrain offers 27mpg on the highway and 19mpg around town. I was not able to reach the expected combined figure of 22mpg, but that is because I spent so much time keeping the turbo spooled up as tested the performance capabilities of this stylish, sporty Buick.

The Final Word
While the 2015 Buick Regal GS isn’t the most powerful luxosport sedan on the market, it is hard to find a vehicle that combines exterior styling, interior comforts and a performance oriented drivetrain as well as the new Regal GS. Like the Grand National of the 1980s, the new Regal GS offers solid performance in a package that can comfortably be driven every day, so if you are looking for a midsized sedan with all-wheel drive, a powerful turbocharged engine, a sport-tuned suspension system and a cockpit packed with premium features, the 2015 Buick Regal GS is an amazing option for an amazing price. You can get similar features and performance from other cars in today’s market, but you will have a hard time getting everything that you get from the Regal GS in a car priced anywhere near this sporty Buick. In the end, there is no question that this is the most exciting Buick since the 1980s Grand National.