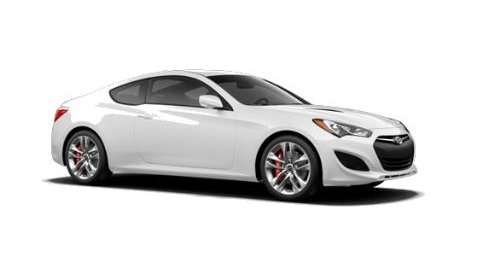 While the 3.8L V6 engine packs more punch, the turbocharged 4-cylinder that serves as the base engine for the 2013 Hyundai Genesis Coupe performs beautifully while also offering better fuel economy than the larger and more expensive V6 – while also featuring all of the strong points that make the Genesis Coupe one of my favorite cars on the market today.
Advertisement

The 2013 Hyundai Genesis Coupe 2.0T that I am reviewing today was fitted with the R-Spec trim package. This is the only current trim that is available with both the base model 2.0L turbocharged engine and the 3.8L V6 and as virtue of such – the two cars are identical in almost every way shy of the drivetrain. My previous review of the Genesis Coupe with the 3.8L V6 was also fitted with the R-Spec package and for my complete thoughts on the interior and exterior of this great looking Korean sports car, you can click here to read the review of the Gen Coupe with the 348 horsepower V6. Because these two models are so similar, I will take a slightly different approach to the review of the turbocharged version of the Genesis Coupe R-Spec – looking at the few differences but focusing on the drivetrain and the driving characteristics of the 2.0L turbocharged mill.

The similarities between the two differently powered 2013 Hyundai Genesis R-Spec Coupes continues on the inside where our turbocharged 4-cylinder test model was fitted with the same sharp black and red interior layout. This includes sport seats with red leather hip and side bolsters with cloth center sections in red and black which look great and help provide more butt grip during spirited driving. In addition to the red leather seats, both models include a leather wrapped steering wheel, a leather wrapped shifter and other black leather trim around the cabin to accentuate the sportiness while also providing an upscale feel. The differences between the 3.8 and 2.0T models are limited to the accessory gauges mounted in the center stack. Both models come with three small analog gauges mounted just above the HVAC controls with a fuel consumption gauge on the left side and an oil temperature gauge on the right but the middle gauge differs depending on which engine is chosen. V6 models get a torque output gauge the reads up to 300lb-ft of torque while the turbocharged Genesis Coupe sports a center boost gauge that reads up to 15 pounds of boosty goodness. While the torque gauge is a cool feature and it is one that I missed in the turbo models, I believe that every turbocharged sports model should have a boost gauge and Im glad that Hyundai opted to fit the Genesis Coupe 2.0T with this handy readout.

The Drive
The only place where the 2013 Hyundai Genesis Coupe 2.0T R-Spec and the 2013 Hyundai Genesis Coupe 3.8 R-Spec really differ from one another is the drivetrain and even then – the changes are actually pretty minimal. Both of the 2013 Genesis Coupe R-Spec models are equipped with a Brembo brake package tucked inside of 19 inch lightweight wheels wrapped in high performance tires. Both versions feature identical sport tuned suspension systems. Both models exclusively come with a close ratio 6-speed manual transmission that sends the power to a 3.73 rear end gear. However, what is under the hood is what makes these two cars so different and that begins with the size of the engine itself.

The 2013 Hyundai Genesis Coupe 2.0T R-Spec features a 2.0 liter turbocharged and intercooled 4-cylinder engine that produces 274 horsepower at 6,000rpm and 275lb-ft of torque at just 2,000rpm. The Genesis Coupe R-Spec with the naturally aspirated 3.8L V6 makes 348 horsepower and 6,400rpm and 295lb-ft of torque at 5,300rpm while also weighing 59 pounds less than the 4-cylinder engine due to the added weight of the turbocharger, the intercooler and all of the needed piping. Luckily, the extra weight of the 2.0T and the difference in power doesn’t detract from how much fun the Genesis Coupe R-Spec is to drive in almost every driving situation.

Now, it should be common sense that if you have two cars that are almost identical except for one of them having 74 more horsepower, the car that has more power is going to offer stronger acceleration and that is very true of the 2013 Hyundai Genesis Coupe 2.0T R-Spec compared to the V6 models. The turbo Genesis Coupe doesn’t offer the brutal acceleration and the rock solid, instant-on response that you get from the bigger V6 but at the same time, the Genesis Coupe 2.0T offers acceleration that is smoother and can be a little easier on the driver and passengers. The V6 makes the Gen Coupe a drifting monster that will happily roast the tires at the flick of the right foot and while you can get the same drifty fun from the turbo 4, this smaller engine offers a smoother power curve once the turbo is spooled up. Because of that, anyone who climbs into the driver’s seat of the Genesis Coupe 2.0T without having driven the 3.8L V6 model won’t be missing anything. This isn’t an entry level sports car that makes you suffer with a drivetrain that makes the car a bore to drive – instead offering tons of power with the oh-so-pleasant driving characteristics that you can only get with a modern turbocharged engine. Best of all, the 2.0T offers fuel economy estimates of 21mpg around town, 30mpg on the highway and 21 combined compared to 18, 27 and 21 for the V6. By the way, these lofty fuel economy figures of the turbo 4 Genesis Coupe are very realistic – especially for those who don’t have a heavy right foot. Even with my love of boost and excessively fast driving, I was able to achieve the average fuel economy figures with a real world figure of 24.6mpg over the course of several tanks of gas.

The main complaint with all high performance turbocharged engines is the “turbo lag” that comes before the turbocharger is spooled up but spool time of the 2013 Hyundai Genesis Coupe 2.0T R-Spec is very minimal – enough so that most drivers won’t even notice any real lag between when their right foot asks for the power and when the Genesis Coupe delivers that power. Also, while the turbo model offers less power and torque than the bigger V6, the 2.0T has a torque curve that peaks sooner and that helps a great deal in making up for the difference in power.

In terms of handling, the 2013 Hyundai Genesis Coupe 2.0T R-Spec conducts itself very much like the more powerful V6 models. While the entire Genesis Coupe lineup is a drifters dream come true, this is a car that will handle as well as any affordable sport model sold in the US today. The suspension makes this car super nimble in tight quarters while keeping the Gen Coupe very confident on long, higher speed turns. Most importantly, the Genesis Coupe R-Spec offers a stiff ride that wont beat the tar out of the driver and passengers. Mind you, this is a sports car with a clearly sport minded suspension setup so you feel the road through the chassis and the steering wheel but there is a nice balance of handling and ride quality around town and on the highway.

The one place where I did not enjoy driving the 2013 Hyundai Genesis Coupe 2.0T R-Spec was in a heavy snow. While driving the 2.0T model, the Detroit area was blanketed in 6 inches of snow and I happened to have been out and about when the snow hit hard and fast; covering the roads that were already buried in a thick layer of ice. While I suspect that some tires made for winter use would make a big difference, the standard sport tires made getting around very difficult. It was bad enough that at one point, I found myself stuck in a flat parking lot. The front tires were in a small rut in the parking lot and due to the layers of ice topped by fresh snow, the Gen Coupe couldn’t get enough traction to push the front rollers out of the rut. Luckily, the Genesis is light enough that I was able to push the rear end over a bit and the car easily pulled away but I would recommend that anyone who lives in an area that gets lots of snow look into snow tires if you plan to drive the 2013 Hyundai Genesis Coupe 2.0T R-Spec in the winter weather. That being said, I cannot come up with a single complaint on the drive characteristics of the turbocharged Genesis Coupe.

The Final Word
While I am a hardcore fan of the V8-powered American muscle car segment, the Hyundai Genesis Coupe is one of my favorite cars in terms of exterior design, interior comforts and the high level of fun-to-drive factor. Regardless of which engine is chosen, the Genesis Coupe R-Spec offers incredible handling, top notch braking, an aggressive exterior design and a sport yet comfortable interior so if you arent concerned with the bigger power of the 3.8L V6 or you want slightly better fuel economy – the Genesis Coupe 2.0T offers all of the strong points of the higher performance model while carrying a smaller price tag and better MPGs. Unlike many sports cars that offer a base and premium engine, the 2.0L turbocharged 4-cylinder “base engine” of the Genesis Coupe packs plenty of power to still be a blast to drive while other entry level models pack less power and, honestly, less fun. This is truly a sport package that goes with a smaller and slightly less powerful engine without removing the rest of the features that make the Genesis Coupe so much fun to drive.

If you are looking for a car that offers incredible handling capacities, an aggressive exterior, a roomy, comfortable interior, great fuel economy and a solid power output – the 2013 Hyundai Genesis Coupe 2.0T R-Spec could very well be the car for you. This is an “entry level” drivetrain that provides way more fun than most of the comparable drivetrains on the market that force the drivers of base models to compromise power for MPGs and a lower sticker price. The Hyundai Genesis Coupe is one of the best sports cars on the US market and whether you opt for the 2.0L turbocharged 4 or the naturally aspired V6 – this is one of the best driver’s cars out there.

While we usually have unique photography to accompany our reviews here on TorqueNews, the weather was so terrible while I drove the 2013 Hyundai Genesis Coupe 2.0T R-Spec that it was dirty with Michigan road salt the whole time that I had it. Because of that, Ive used a stock image of the 2.0T above in the large image while the gallery below has images of our 3.8 R-Spec test vehicle which is identical to the 2.0T shy of the fog lights and the badging.