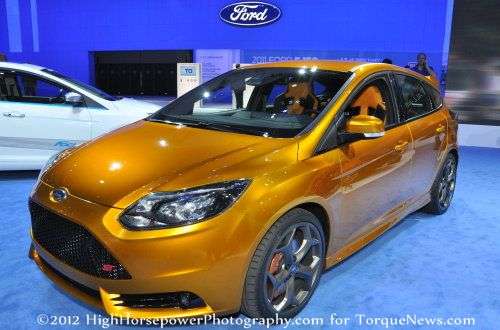 The 2013 Ford Focus ST is slated as Ford Motor Company’s first fully global performance vehicle and as the reach of the new Focus ST spreads around the world – the upcoming 2012 Beijing International Automotive Exhibition will introduce the Chinese market to this sporty new hatchback.
Advertisement

When the Ford Focus ST was introduced, it was billed as the first performance model that would be offered in the same basic form around the world. The Chinese auto industry has been booming over the past few years, making China a key concern for those automakers doing business on a global level so it comes as no surprise that Beijing will get to host the arrival of the production level Focus ST.

"The ST will be the performance flagship of our new Focus range, and we are excited to provide our enthusiast customers the opportunity to see it Beijing," said Nigel Harris, vice president, Marketing, Sales and Service, Ford Motor China. "The ST represents an ultimate expression of Focus driving quality and performance. The Focus ST will be a serious driving machine, and our design and engineering teams have developed a purposeful exterior combined with a cockpit that blends sporting function with impressive comfort.”

The 2013 Ford Focus ST will hit the streets around the world with 247 horsepower and 250lb-ft of torque from a 2.0L high performance 4-cylinder engine featuring EcoBoost technology. The Focus ST is the first high performance application for the EcoBoost technology in 4-cylinder form; although the 3.5L EcoBoost V6 has done a fantastic job powering the Ford Taurus SHO in a performance setting. Turbocharging has been used for decades almost strictly for performance applications but Ford took that induction design and converted it into a system that can offer good power and great fuel economy. However, Ford has shown with the Focus ST’s 2.0L EcoBoost how easily their forced induction technology can be used for multiple applications.

In addition to the high performance 2.0L EcoBoost engine, the Ford Focus ST that will debut in China later this month features a close ratio 6-speed manual transmission, sport tuned suspension, performance braking components, an interior with a race inspired layout and an exterior that allows it to stand out from other Focus 5-door models. The unique 18” alloy wheels, an aggressive front fascia with a huge lower area for optimal air intake, the aggressive rear fascia with integrated exhaust and the rear spoiler mounted high on the back glass give the Focus ST 5-door a look that is hard to miss.

The 2013 Ford Focus ST is slated to arrive in the United States later this year and information on Chinese availability may come as soon as April 23rd, when FoMoCo introduces their first global performance model to the Chinese market.