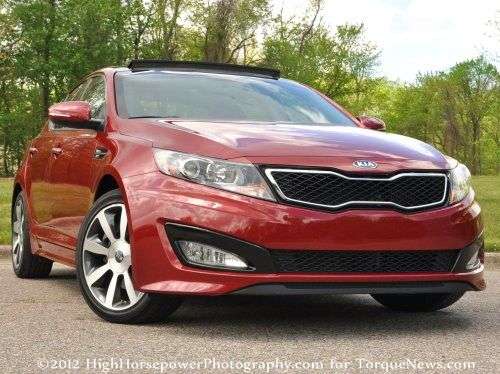 There was a point in time where the suggestion of a great looking Korean sport sedan that had the brass to back up the title would have been little more than a joke but Kia is one of the American auto industry’s most improved brands over the past few years – a fact clearly illustrated by the 2012 Kia Optima SX.
Advertisement

The 2012 Kia Optima SX is the top of the line offering for the model while the Optima itself currently serves as the company’s premium vehicle. This sporty sedan sports the aggressive design that was introduced for the 2011 model year and while some might not care for the distinctive style – I love it. The previous generation of the Kia Optima was much like the rest of their lineup, with styling that allowed them to blend in with the Camrys and Accords of the world but with the introduction of the new Optima – Kia has a sport sedan that stands out against the competition.

The Exterior
The 2012 Kia Optima SX has a long form for a midsized sedan with high fender lines and a low roofline that creates a sleek, slippery form. Up front, the Optima wears a familiar “grin” with the headlights pouring down into the grille while the lower fascia area gives the car a menacing smile. With the large projection headlight units and the large foglights mounted towards the outer edge of front fascia – the Optima provides gobs of light at night while also presenting a very distinct look that we see across the majority of the current Kia lineup. This is one area where some critics of the car might raise an eyebrow but it took balls for Kia to go so aggressive with their exterior design and in my opinion, it paid off 100%.

The long hood and windshield flow seamlessly through the shortish roof and into the fastback style rear glass and trunklid. Along the sides, the Optima has a very high body line that runs from the headlights to the taillights with black b-pillars adding to that “big coupe” feel. The greenhouse has thin pillars in the front and side while the larger, sweeping rear pillar that rolls smoothly into the short trunklid that is punctuated by the subtle rear spoiler. The design of the rear end isn’t as radical as the front end but with large LED taillights that wrap around into the side of the vehicle and the flat black lower fascia with integrated dual exhaust; this rear end has a great sporty feel. The accentuated wheel openings are filled out nicely by the 18” alloy wheels and these help give the Optima a wide, low stance.

Love it or hate it, there is no denying that the 2012 Kia Optima SX has a sleek, sporty design that stands out in the uber crowded midsized sedan segment. There is just enough chrome to add a little “bling” while the black trim on the grille, along the side and across the bottom end emphasize the sporty attitude of the Optima sedan.

The Interior
The 2012 Kia Optima SX is a midsized sedan but when seated inside, it feels much larger than the class designation would leave you to believe. My Optima test car was fitted with both the Technology Package (adding a high end navigation/touch screen setup) and the SX Premium Touring Package (adding things like heated/cooled seats, a rear camera display, power mirrors, an Infinity Audio system with HD radio, the gorgeous panoramic sunroof that stretches over the front and rear passengers and much more. In short, this car was as loaded as a Kia sedan can get and it shows. The two tone leather seats and comfortable and look great while the heating and cooling features add comfort in all sorts of climates. Even with the driver’s seat adjusted for a 6 foot tall driver and a 6 foot tall passenger, there is enough room for the average adult to sit comfortably in the back seat, while offering lots of room for kids. There is a pull-down armrest in the back seat with cup holders when there are only two riders in the back with leather everywhere – from the door panels to the dash to all seating areas.

The leather trimmed dash of the 2012 Kia Optima SX has a cockpit design that is centered around the driver with a large touch screen mounted high on the dash offering stereo and navigation control while, with the push of a button, you can control the climate controls. More importantly, if touch screen controls aren’t your thing, the Optima SX has more traditional knobs and buttons below the touch screen. The Optima SX also offered steering wheel mounted controls for the stereo, the cruise control, the Bluetooth phone system and the in-dash trip information. This central screen in the dash is flanked by two large easy to read gauges displaying the speed and engine RPM. Best of all, the Optima has a paddle shift system that lets the driver select gears with the push of a button – with a great, sporting design.

The 2012 Kia Optima SX interior offers comfort and technology that you find in far more expensive models – leaving you asking for very little in terms of amenities.

The Drive
The 2012 Kia Optima SX is powered by a 2.0L turbocharged 4-cylinder engine that packs 274 horsepower and 269lb-ft of torque that is funneled to the front tires via an electronic 6-speed automatic transmission. This drivetrain offers 22mpg around town, 34mpg on the highway and a combined figure of 26mpg overall – and in my time spent behind the wheel I found these numbers to be completely reasonable and you don’t have to drive like a little old lady to hit those figures. I am far from a lightfoot and I frequently used all 274 horsepower and I still averaged right around 26mpg – some tanks slightly higher and some tanks slightly lower depending on how much traffic I was forced to fight. More importantly, this drivetrain makes the Optima SX lots of fun to drive and honestly, the car feels as strong as some competition that offers more power.

Acceleration of the 2012 Kia Optima SX is very impressive when launching hard, with the 6-speed transmission popping quickly through the gears with a nice, strong shift. However, when driving under “gentle” conditions as in typical Friday night traffic, the transmission shifts are smooth and easy not to notice. When you shift into manual shift mode, you can use the paddles to upshift and downshift but unlike some systems, the Kia manual shift system is quick to override the driver when trying to “stretch” a gear. This is one feature that I did not like but this self-shifting preference is popular on many cars with a manual shift mode for an automatic transmission. However, once you get the hang of when you can shift, the automatic transmission adds some fun to drive factor. The Optima SX packs more than enough power to allow you to rip out into faster moving traffic and while you might not be knocking off any muscle cars – the Optima provides plenty of fun to drive factor.

The ride quality of the 2012 Kia Optima SX is very impressive with very little of the road roughness transferred through the chassis or steering but at the same time – you don’t lose a feel for the road. Some vehicles mute the feel of the road so much that it becomes too synthetic feeling but the Optima SX preserves the feel of the road through the steering wheel for the driver. On the open road, there is no noticeable body roll even on longer banks at higher speeds which translates nicely into sharp handling in tighter areas. When cutting along winding back roads, the Optima sticks to the road very nicely and the four wheel disc braking system allows you to bring the roomy Kia sedan to a stop in a hurry.

The Final Word
The 2012 Kia Optima SX is aggressive and distinct in its exterior design with a loaded up interior and a drive train that caters to those who want some driving excitement. When driving conservatively, the Optima will surely exceed the 34 mile per gallon highway expectations but the car is enough fun to drive that I had a hard time not enjoying the spool of the turbocharger and all 274 horsepower. With a great amount of seating for two adults and two children, a high tech sound system and a gorgeous panoramic sunroof – the interior is inviting for everyone who enters and while it is clearly a sport-minded interior – it is not without some luxury feel.

I am a sports car guy but I enjoyed my time spent driving the 2012 Kia Optima SX. The turbocharged drivetrain offers great fuel economy and plenty of power so for someone in the market for a new midsized (yet especially roomy) sedan – the Optima is one that deserves the title of a “sport sedan” – with a price of $31,745 in fully loaded form. The Optima isn't just another bland entry in the midsized sedan segment and it deserves a good look before making your next new car purchase.

Andrea @ Lancer GTS wrote on June 18, 2012 - 11:21am Permalink
I really enjoyed the SX version while I was looking for a new car. I actually drove the SX 5 different times. Overall I ended up with the VW CC because of 0% financing, but the SX was a very close second tied with the Regal Turbo. I hope the SX golds up well with time.