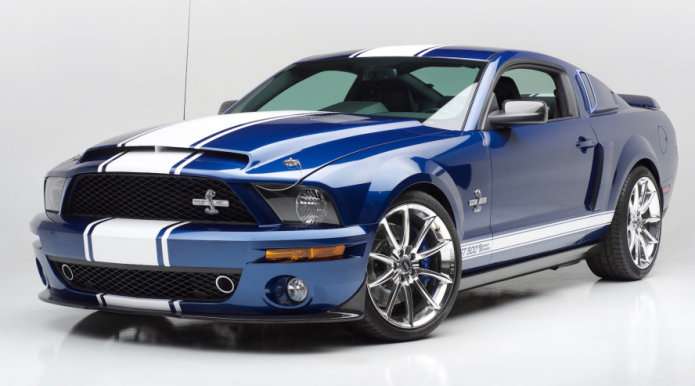 Barrett Jackson Auto Auction president Steve Davis has donated a 2007 Ford Mustang Shelby GT500 Super Snake from his personal collection to be auctioned off to raise funds for the Las Vegas area first responders who had to face the horrific scene of the concert shooting earlier this month.
Advertisement

Last month, a crazed gunman opened fire on a music festival along the Las Vegas Strip, killing or injuring hundreds of people, creating a brutal scene for the areas first responders. To support those first responders who risked their lives to help victims of the shooting, Barrett Jackson Auto Auction president Steve Davis will auction off a unique 2007 Ford Mustang Shelby GT500 Super Snake from his own collection at the upcoming Barrett Jackson Auto Auction at the Mandalay Bay resort in Las Vegas.

For those who are unaware, Shelby American is headquartered near Las Vegas, so the tragic shooting earlier this month hits especially close to home for the long-time Mustang tuning experts.

The 2007 Ford Mustang Shelby GT500 Super Snake
The 2007 Ford Mustang Shelby GT500 Super Snake being auctioned off later this month to support Vegas area first responders is being donated by Barrett Jackson Auto Auction's Steve Davis, who had this 600 horsepower machine in his private collection. Prior to him owning it, this GT500 was owned by former Ford boss Mark Fields and this was the 7th Shelby Mustang built for the 2007 model year. When it went to Shelby American for the Super Snake conversion, it was the 11th conversion for the 2007 model year, with Carroll Shelby himself overseeing the build and signing the documents which come with the car.

In addition to the supercharged engine package with 600 horsepower and all of the “normal” features of the package, this particular 2007 Ford Mustang Shelby GT500 Super Snake is fitted with the 40th anniversary package, which includes unique badges, bigger brakes, a high performance suspension package and other unique appointments.

It is hard to guess as to how much this 2007 Ford Mustang Shelby GT500 Super Snake will sell for at the auction which runs from October 19-21, but six figures wouldn’t be a surprising number – especially when you consider where the proceeds will be going.

“All of us at Barrett-Jackson are heartbroken over the tragic event in Las Vegas Sunday night,” said Craig Jackson, head of the Barrett Jackson Auto Auction group. “Like many people around the country, this event hit close to home. We are returning to Las Vegas for our 10th annual auction to stand by our partners. We had many friends in attendance at the concert, and were deeply saddened to learn the son of one of our valued customers tragically lost his life. There are no words to express our sorrow as we all try and cope with what happened and, like many around the country, our focus immediately turned to what we could do to help. This car will sell during our live broadcast on Discovery Channel on Saturday, and is one of the many steps we are taking to stand with Las Vegas at this difficult time.”