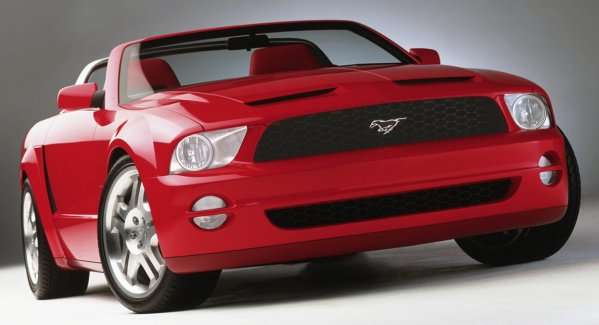 Back in January of 2003, the new Ford Mustang Concept was introduced at the Detroit Auto Show with a new look that was unlike anything that we had seen from the fabled pony car in ages and right now, you can purchase the Mustang Concept which led to the modern era of Ford’s favorite performance car for the low price of just $350,000.
Advertisement

When the 2003 North American International Auto Show opened in Detroit in January 2003, the Ford Mustang had the same curvy exterior design that it had since the end of the Fox Body era in 1993. That rounded 2003 “New Edge” Mustang was on display at the Detroit show back in 2003, but more importantly, that Detroit show 13 years ago marked the introduction of the 2003 Mustang Concept – a car whose styling would be used to shape the Ford Mustang that we know and love today.

That exact 2003 Ford Mustang GT Concept car that debuted at the Detroit Auto Show is available for sale with a price of $350,000. Oh, and you can’t actually drive it.

The 2003 Mustang GT Concept
The 2003 Ford Mustang GT Concept shown above was introduced at the 2003 Detroit Auto Show with the promise that when the Mustang was refreshed for the 2005 model year hit dealerships, it would look a great deal like this bright red convertible concept. Ford stayed true to their word and their design, as the 2005 Ford Mustang GT looks very similar to this concept car, with the exception of some minor details like the shape of the fog lights, the shape of the taillights, the dual vented hood and some of the sculpting aspects in the doors and along the rear end. The interior of the production model was vastly different from the concept car, as was the drivetrain, but in terms of the basic exterior design, the 2005 Mustang looked a great deal like the 2003 concept car right down to the wheels.

In other words, the 2003 Ford Mustang GT Concept was the first time that the public was formally introduced to the S197 body styling, which would be tweaked a few times before being fully refreshed for the 2015+ S550 Mustang, but even the newest Mustang still sports the basic form of the 2003 Mustang GT Concept with long, low lines from front to back and a far flatter design than the 1994-2004 models. The 2003 concept car looks far more like the 2005 models than the 2015 models, but this was the car that introduced us to the modern era of the Ford Mustang…and you can buy it from ExoticClassics.com right now.

In addition to the new exterior styling of the 2003 Mustang GT Concept, this car has a unique interior – almost none of which made it to production – and a unique supercharged 4.6L V8 with 400 horsepower. That supercharged engine obviously didn’t make it to production, as the 2005 Mustang GT was powered by a naturally aspirated 300hp V8, so in addition to having a long list of unique design cues, this is the only Ford-built Mustang from that era with a supercharged 4.6L V8 with 400hp and a 5-speed automatic transmission.

The only problem with this car – other than the fact that it costs $350,000 – is that since it was a concept car and not a production car, this 2003 Ford Mustang doesn’t have a VIN number and it has never been subject to any sort of government regulations, so the buyer will never be able to drive it on the street. However, for a hardcore Mustang fan with deep pockets and a museum to show off such a rare piece, this is a very rare chance to own a 1-of-1 Ford Mustang Concept.

There are a ton more pictures of this 2003 Ford Mustang GT Concept over at ExoticClassics.com and you can see them all by clicking here.