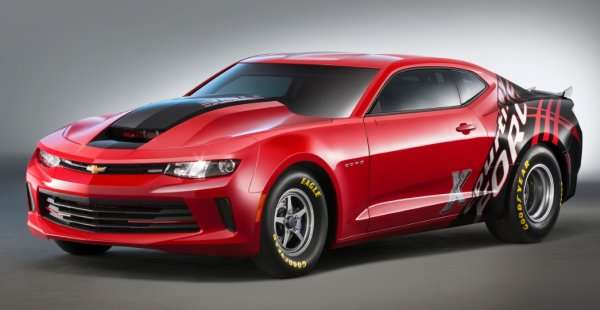 The first COPO drag racing package for the 2016 Chevrolet Camaro will be sold to the highest bidder tonight, when it hits the stage of the Barrett Jackson Auto Auction later today – and you can watch the action live on the Velocity channel as the COPO Camaro auction proceeds around 7pm EDT.
Advertisement

The 2016 Chevrolet Camaro COPO drag racing package was officially introduced at the 2015 SEMA Show in Las Vegas. NHRA driver Courtney Force, who drives a Chevrolet Camaro funny car, helped unveil the new COPO Camaro at SEMA and to recognize her part in the program – the company finished that car in a similar black and red livery to what is found on her race car. That same car that drew so much attention at SEMA is production unit #1 and it will be sold tonight with the proceeds going to benefit the United Way.

“This is a special opportunity to purchase the first of the sixth generation, 2016 COPO Camaro while also helping such a great cause,” said Jim Campbell, U.S. vice president of Performance Vehicles and Motorsports.

2016 COPO Camaro #1
The 1st of the 69 COPO Camaro race cars built for the 2016 model year is painted red with the black trim on the hood and quarter panels, along with Courtney Force’s name flowing down the sides of the car.

“I was extremely honored to work with Chevrolet and help design the 2016 COPO Camaro,” said Courtney Force. “The bright red color and the signature slash marks towards the back on the car bring a part of my Traxxas Chevrolet Camaro Funny Car to the COPO Camaro, which I think is really cool. The proceeds from this car go to a great cause and benefit the United Way, so it's an awesome project all around."

While the 2016 COPO Camaro is offered with a few different engines, 2016 COPO #1 is packing the most powerful option – the 350 cubic inch V8 topped by a 2.9L Whipple supercharger. This setup should offer enough power to get the COPO Camaro down the quarter mile in the 8 second range and literally everything needed to run 8s safely and legally is included in the package. This is a turnkey 8-second NHRA approved race car from the factory, following in the fine tradition of the COPO name.

See the Auction on TV
2016 COPO Camaro #1 will hit the Barrett Jackson auction block tonight and it is expected to hit the stage around 7pm. This Camaro is Lot #3005 and with the auction airing on the Velocity channel all day – starting at 2pm and running through 10pm EDT – fans of the show will get to see this new Camaro sell live.

Past #1 Camaros have often sold for anywhere between a half million and a million dollars, with NASCAR team owner Rick Hendrick being one of the most common collectors to snatch up the first of a new Camaro or Corvette. I would think that Mr. Hendrick will take a shot at winning this Camaro to go along with the COPO #1 he bought during the last generation.