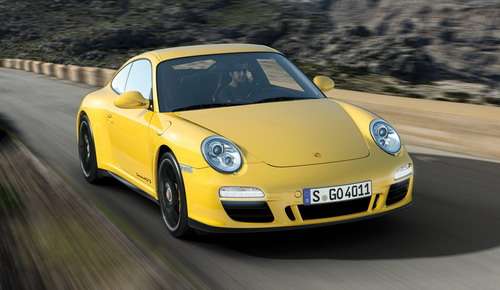 The new 998 generation of the iconic Porsche 911, that is undergoing the final experimental phase, will be officially introduced at the Frankfurt Motor Show in September. Till then, the constructor from Zuffenhausen, Germany continues to garnish the current 997 lineup with exclusive models: today, it's the turn of the new 911 Carrera 4 GTS.
Advertisement

When someone mentions the name Porsche, your mind instantly swaps to the legendary 911. Because this uniquely-shaped coupe, with its rear-mounted, boxer engine, ignited the field of sport cars and rewrited all the basic principles in this market segment. The 911 was the opera of a talented engineer, Ferdinand Alexander "Butzi" Porsche (son of Ferdinand Porsche, founder of the brand), who traced the first sketches of the primarily-entitled "901" in 1959. Due to a disagreement with French carmaker Peugeot, that claimed themselves as the rightful owner and user of this specific type of lettering with a zero in between the other two digits, the 901 was transformed into 911 shortly after the car had its premiere at the 1963 Frankfurt Auto Salon.

Being the epitome of an entire generation of exquisite sports vehicles and given the fact more and more supercars appeared as the 20th century was approaching the final decades, the task 911 had to accomplish was no easy job. The company had to constantly udpate the car in order to stay afloat and securely ahead of the competition. The first 911 generation lasted 26 years from 1963 to 1989 and it was then replaced by the 964 model series between 1989 and 1993. The 993 generation arrived in 1993 and ended its career 1998, paving the way to the less appreciated 996 version, which was the crowned flagship of Porsche until 2005. That year marked the return of the popular oval headlamps on the 997 model generation and brought the company the success they were longing for after some hard years.

As the 997 is fastly approaching the end of the lifespan, Porsche is gradually releasing dedicated versions in order to cover all the possible market demands. The latest of the series is the new 911 Carrera 4 GTS, that benefits from the competent technical artilery of the GTS rear-wheel drive version and the neat dynamics ensured by the AWD system - the electronically-controlled Porsche Traction Management or PTM. It provides the best grip and powerful acceleration under almost any circumstances thanks to the electromagnetically-operated multi-plate clutch and the limited slip differential installed on the complex chassis. Power is available courtesy of a six-cilinder, flat-architecture engine with a total displacement of 3.8 litres and peak output of 408 hp/4,200 rpm. The upgrades in performance were also possible as a result of a new, enriched sports exhaust system that was fitted to the Carrera 4 GTS.

The styling revisions include the usual 44-mm wider rear wheel arches (widespread across all the AWD 911s), a SportDesign front apron, black-coloured side skirts and GT2-borrowed panel between the quad exhaust pipes which are finished with polished, nano-coated inner shells and 19-inch RS Spyder design wheels, painted in high-gloss black. When clients move to the interior, they will be welcomed by a puristic ambience, where the black colour tones and the Alcantara leather upholstery are the main actors of the visual orchestra.

In Europe, the sales will start immediately, whereas Americans have to wait a bit more, as the new Porsche 911 Carrera 4 GTS will be available in all U.S. showrooms beginning with this fall in both Coupe and Cabriolet forms, with base MSRP prices of $110,200 and, respectively, $120,100.