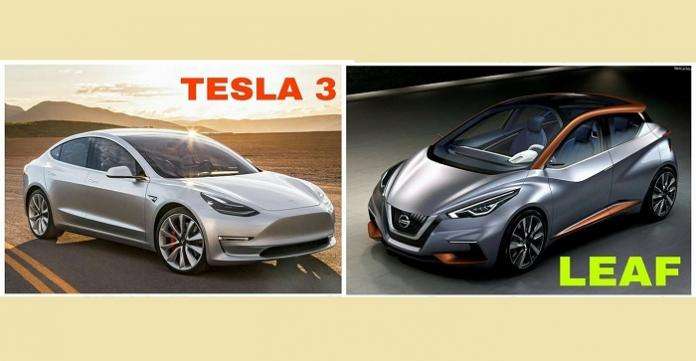 Tesla Model 3 vs 2018 Nissan Leaf: The Prettier One

After Tesla CEO Elon Musk released the first production pictures of the new Tesla Model 3 social media was quickly filled with discussions comparing it to the new Nissan Leaf and talking about which of them is prettier.
Advertisement

We can't really compare the exterior beauty of Tesla Model 3 vs the 2018 Nissan Leaf until we have the first real images of the new Leaf. What we have so far is rendering or the IDS concept, when it comes to Leaf.

However, the IDS concept, from which the 2018 Nissan Leaf is to draw its inspiration is very beautiful and can give some base to Nissan owners to make comparison.

Note that in the concept the Nissan Leaf has a curved-top windshield. That makes it very unique. Tesla Model 3 doesn't have it. On the other hand the Model 3 may have a panoramic roof, which we have to see if Nissan designers decided to do that for the upcoming 2018 Nissan Leaf.

Some people say Nissan's interior will be unchanged. And this makes the Model 3 the way to go. However, I don't know if the 2018 Nissan Leaf will come with unchanged interior.

Few other people in the social media chatter say that on appearance sake alone the Chevy Bolt is the worst of the 3. I personally think that Chevy Bolt is a nice looking EV.

When I look at Model 3 I see minimalism. This is what we get from looking at the interior and exterior pictures of Tesla Model 3. Things are simple and straight to the point. There is beauty in minimalism too. But some call the design boring. I understand it. If you want to make an affordable EV you can't do a lot of things to it without pushing the price up.

Others don't like Tesla's door handles. Although, they are fine with me. But I think Tesla Model 3 reminds of Corvette and Audi as seen in these pictures.

On the other hand, people looking at this Nissan Leaf concept say that they don't like the "wrinkled cars." They say they understand that "wrinkles" help with the air flow, but even some Nissan enthusiasts from Leaf Owners Group on Facebook say it's ugly, among many other positive things about the 2018 Nissan Leaf. Some of them even called them "wind tunnels."

Again, what we see in the picture is a concept car. Concept cars usually look nicer and cooler compared to the final versions. In fact, when you look at the recent spy shots of the 2018 Nissan Leaf, they are not really impressive. Although, I have to admit that you can't make an informed decision on a camouflaged car.

"I suspect the Leaf will come with comparable miles per charge, a similar or lower price and the extensive Nissan dealer network. Spy photos suggest it will look a bit more mainstream than the original Leaf. Those all being the case, the Nissan seems like a better bet. My 2013 Leaf has been pretty trouble free, but for the rare glitch there are 5 nearby dealers to choose from. Tesla has a building in an industrial park, 20 miles away and that is there only service facility. Nissan usually has great rebates and incentives and outstanding lease deals," writes a user named Mark on Facebook.

Speaking of rebates, this utility company's $14,000 Nissan Leaf deal can set a nationwide trend for more cheaper electric vehicles. Once the price becomes the only deciding factor, I expect the utility companies finding ways and negotiate more deals with EV car-makers to help their customers buy EVs at a cheaper price.

This one view comes from Japan. "The new Leaf looks better than I expected. It's actually a tough choice, though the Tesla probably performs way better. However, here in Japan the Leaf has the support network," writes a user named Richard on Facebook.

E wrote on July 10, 2017 - 11:10pm Permalink
The pic posted isn't even the IDS concept. Its the Sway concept that became the new Nissan Micra
Armen Hareyan wrote on July 11, 2017 - 8:35am Permalink
Aren't they almost the same or identical. I read that this is the "Sway" concept, but I thought they are the same. Aren't they?

Elon Makes a Cybertruck Statement With an Action, But Quiet in Words
Tesla's Record Month in China: Doubled Registrations in March 2021
END_OF_DOCUMENT_TOKEN_TO_BE_REPLACED