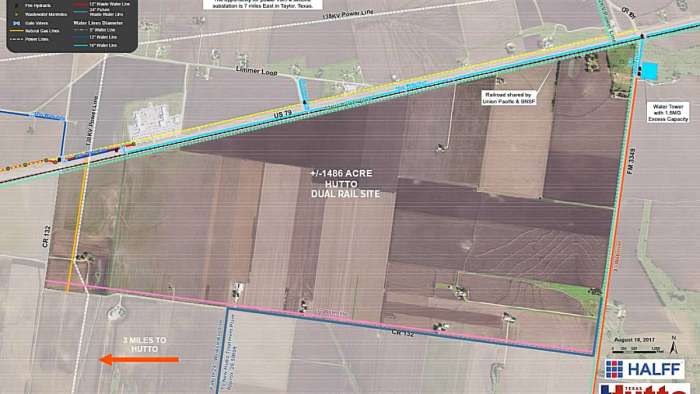 This Property in Hutto, TX May House Tesla's Austin Terafactory

Yesterday when we learned that Austin and Tulsa are finalists for Tesla’s Cybertruck Terafactory, the first question that came to mind was where is Austin Terafactory going to be located?

Here is the possible Texas Cybertruck Terafactory’s site. We think Austin Terafactory may be located on this piece of land in Hutto, TX, just Northeast of Austin. This location finished as runner up for Gigafactory one and has access to two railroads. It seems like an obvious choice for a Terafactory and currently is being actively discussed on Reddit.

Hutto, TX has several advantages for Tesla to build its next Terafactory outside of Austin to make electric cars and the new generation of car batteries.

Hutto Texas is half an hour north of Austin-Bergstrom International Airport by car.

This is approximately 1486 acres of land. If we convert the size to hectares and compare with Tesla's Giga Berlin, which is currently the largest piece of land Tesla owns, this property is twice bigger than the property at Giga Berlin. Giga Berlin is a 300-hectare land, while Giga Austin will be 601 hectares if this property is chosen. Indeed, a good size for a Tesla Terafactory.

This property is 3 miles away from downtown Hutto. It has a water tank tower with 1.5 MG excess capacity, a railroad shared by Union Pacific and BNSF, and a power distribution with 10 MGW excess capacity.

But some people say the rail lines will not play into this. The line that runs past the site is owned by UP and already serves 29 trains a day. After Tesla bought Fremont, UP refused to negotiate on pricing to ship cars from Fremont or ship batteries from Nevada. Tesla responded by ripping up the rail spur at Fremont(It is unclear when this happened, some time in or before 2017). “Based on this, I don't think UP would agree to let Tesla connect a spur to its line at this site in Texas. There is bad blood between UP leadership and Tesla, and they have a convenient excuse in that the communities along the line are already upset with UP about the number of trains that run along it. If they aren't allowed to build a spur, it doesn't matter that BNSF has rights to use the line, and would be willing to serve the new factory,” writes one user on Reddit.

Apparently, Hutto, TX has been holding on to this tract of land in an effort to lure in a large factory and is willing to expedite entitlements, permits, and inspections in order to meet tight project deadlines.

Within 15 miles Tesla can reach a population of 600,000 and And Austin has been a technology hub since the 1990s, "Silicon Hills." The city has plenty of higher education there too.

Apple is building a new campus in Austin. So it makes sense for Tesla to chose the Austin area for its next Terafactory.

In 2014 Hutto fell short in bid for Tesla's battery factory and finished as the runner-up in a nationwide competition to land electric car manufacturer Tesla Motors' proposed $5 billion Gigafactory. Will 2020 be the time for Hutto to land the Texas Terafactory?

It will very likely be either in Hutto or Taylor. First reported by Electrek, and later confirmed by Teslarati with multiple sources, Texas is the forerunner to become home to the company’s next US factory.

Corbin wrote on May 18, 2020 - 7:00am Permalink
Do you know what the front runner site is?
Indru Malkani wrote on May 24, 2020 - 5:58pm Permalink
If the Tesla site is going to be in Hutto, what is the location from SH 130 and Westinghouse
Brad Sloan wrote on May 24, 2020 - 7:44pm Permalink
Took a trip out to the suppose location. Only thing happening is corn growing about six foot tall. Across the road just to the east and behind the water tower is construction of a rail terminal. Took photo of the site but don't know how to send photos.

Tesla-Funded Research Reveals One of The Biggest Mysteries of EV Battery
Tesla Tesla Buyer Nets a Whopping $12,000 Discount After Asking for Reduction
END_OF_DOCUMENT_TOKEN_TO_BE_REPLACED