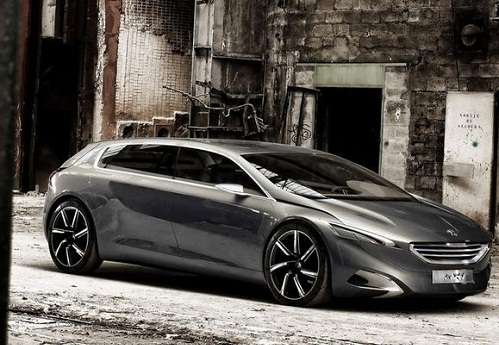 The French auto maker Peugeot brings back to the 2011 Frankfurt Motor Show the new concept of French high end cars, the HX1.
Advertisement

Peugeot's upcoming high end HX1 concept at the 2011 Frankfurt Motor Show is surprising for car pros. Since the company discontinued it's large 607 sedan in 2010 the auto maker is no longer present in the segment of large premium cars. Peugeot 508 RXH, also debuting at 2011 Frankfurt Motor Show, is there trying to fill this gap. However, its role is mainly to replace 407 model as a standard family sedan. It's a large sedan, but it is not high end.

By presenting its HX1 concept at the 2011 Frankfurt Motor show Peugeot is accomplishing two things. It sends out a message that it is back in the luxury auto segment. It also distinguishes itself by presenting innovation. Peugeot HX1 the concept, which seems to be a mixture of crossover, wagon and coupe, presents unique proportions based on a unibody architecture. The car is 4.95 m long and 1.38 m high. It's the length of an Audi A6, about the same height as RCZ coupe and in a way, similar to the concept of Citroën DS5, taken to extremes.

The auto maker says it has built the design of the body of HX1 by searching an optimal aerodynamic solution. This, the company says, has contributed to the overall efficiency of the vehicle, something that may raise some eyebrows at the Frankfurt auto show. Yet, Peugeot was able to include some extravagances as well, such as four doors opening in opposing semi-scissor, intended to facilitate boarding.

The front of HX1 is aggressive and aesthetic. The lines are stretched and cut by sharp edges. The interior design is also innovative, with a dashboard in futuristic design and use of materials such as natural oak, brushed metal, leather or even fiber.

The company says HX1 will deliver 299 hp to all four wheels. This is a power not often achieved in French cars. The hybrid version of the car can be charged by electricity and travel up to 18.64 miles in all electric mode.

This is all good, but concept cars are no promises. The auto industry has witnessed a number of concepts not becoming a reality. However, considering the success of Citroën and the prospects offered by some markets, notably China, in the upscale segment, it is fair to assume the company will benefit from turning this concept into a real car. If the beautiful body of HX1 is matched by a positive feedback from the 2011 Frankfurt Motor Show Peugeot may well go ahead and make this concept a car.