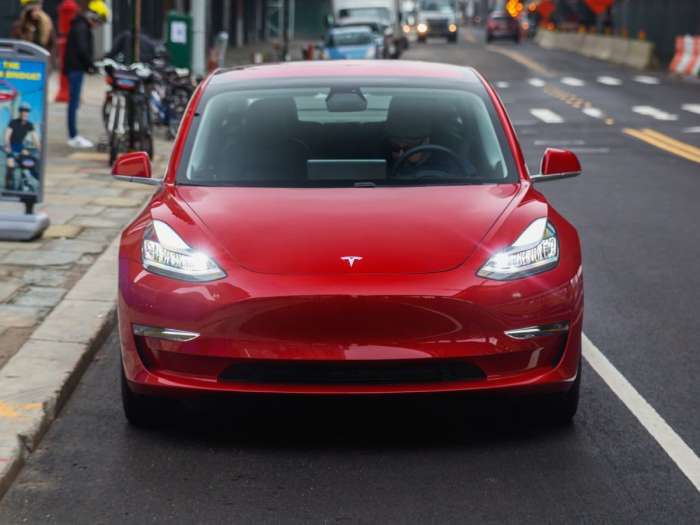 No Question Tesla Can Build Nice Car, What Matters Is Can It Do It at 35K$ Price Point?

A new analysis from the Business Insider says "a tsunami of money could be headed Tesla's way in the next year - and that’s bad news for the bears." Let's look at Tesla's chances.
Advertisement

I am survey some Tesla Model 3 and Model S owners and enthusiasts on this topic and here is the general mode.

According to them the truly bad thing for the TSLA bears is that the Model 3 is a phenomenal car and they say that's all that really matters in this equation. The company should turn to profitability in the next year and half time.

Business Insider's Matthew DeBord concludes that if Tesla maintains between 2,000-5,000 Model 3 productions per week, that's $2.4 billion in revenue over the next 6 months period.

"That's a tsunami of cash on the way for Tesla, and I've been conservative in my estimates. Very conservative. There's no guarantee that the surge in revenue will convert to bottom-line profits. Tesla might still have to raise funds in 2018 or 2019. But the intensified cash-flow is going to be an issue for Tesla bears. A major issue," writes DeBord.

Tesla needs to make the Model 3 more valuable for its customers. There's no question that Tesla can build nice cars, what truly matters is: can Tesla do it at a 35K$ price point.

Now someone can contradict to this and compare it to Ford. For example, there's no question that Ford can build nice trucks, what truly matters is: can Ford do it as a battery EV.

I don't know. Probably. But Model 3 buyers will also ask, can I buy a better or comparable car for the money. If they can't buy a 35K Model 3, they may simply turn to Chevy Bolt, which starts at $36,620. And Chevy has a 3-step strategy to significantly lower the price of the Bolt.

On the other hand, a Tesla pickup truck may be a game changer when you compare it with other pickup truck makers. Ford will have to deal with a serious loss of sales from it’s most profitable segment if and when Tesla starts making all-electric pickup trucks. If Tesla makes a coupe on the Model 3 platform you can say goodbye to Mustang GT sales as well.

Also, there are a lot of buyers waiting for the "second model year" of Tesla Model 3, when the production line is running smoothly and the bugs and kinks are worked out. And I would say the majority of potential buyers currently believe the lies about Tesla, something that a couple hundred thousand Model 3's on the road should remedy rather quickly.

DeanMcManis wrote on July 22, 2018 - 2:34am Permalink
I think that Tesla just needs to continue to evolve and improve their vehicles. They already have a pretty well drawn out plan so far, and it will just take hard work and continual improvements to keep them competitive. Hopefully the profits from the steady production of Model 3s will fuel this progress. Tesla's GigaFactory should reduce the battery cost for their whole lineup of electric models, just as GM plans to refine and re-engineer their batteries to reduce to future cost. I think that the more automakers who competitively innovate and advance battery technology, the better the chances are to lower the cost and improve the weak points of batteries. Tesla is smart to come out with an electric truck because it is a BIG market with a great commercial and consumer appeal. Ford (and GM even more) could easily come out with a competitive electric truck, but it may take Tesla to prove the market to be profitable first before they commit themselves. There is a huge profit margin already in big trucks and SUVs like the Cadillac Escalade, and even though many people think about electric economy cars, the market that Tesla have proven is with luxury and performance vehicles. I doubt that producing a coupe version of the Model 3 would put much of a dent into Mustang, Camaro, or Challenger sales, but they certainly could build a sporting high performance 2+2 coupe if they wanted to. Part of the appeal of the American Ponycars is that they have very sporty styling, good handling and braking capabilities. And the entry level models Start around $25K, so Tesla will more likely compete against European performance, near-luxury models first because their higher price and capability would be comparable. GM has all of the technology from the Volt and Bolt to build BEV and especially PHEV versions of their whole model lineup pretty quickly, but what is their incentive? Right now they are making far more profits off of their regular gasoline and diesel models. So I think that Major American automakers will change from having 1-2% of their overall sales being BEVs to say 5-10%. It is just more likely that we will see that change over the next 5-10 years, as opposed to the next 1-3 years.
kent beuchert wrote on July 22, 2018 - 10:41am Permalink
REgardless of the positive claims, the reason I would never consider buying a Tesla is 1) Autopilot - a $5,000 death trap 2) terrible engineering for collision repair - when a 4 by 1 inch paint defect/scrape requires a $6800 two man day repair, I'll pass 3) Tesla batteries are prone to self ignition and ignition during crashes 4) Tesla Superchargers are now only half as fast as the worldwide CCS charging standard used by everyone except Tesla. 5) Tesla charges $9,000 for $3200 worth of batteries in their long range version - that's pure larceny. 6) Tesla's prices are outrageous -high optioned "$35,000" Model 3 cars sticker for well over $70,000. Calling the (non-existent) Model 3 a $35,000 car is pure fraud.
DeanMcManis wrote on July 23, 2018 - 8:35pm Permalink
Rubbish Kent. You have been drinking the anti-Tesla Cool Aid too long. Autopilot is one of the best autonomous systems on the road today. With only a couple serious accidents so far, nobody likes to mention the thousands of accidents that occurred in the same time frame around the world from inattentive, drunk, impatient drivers who crashed, without any computers there to watch their back or save them. It is simply a weak argument to say that a developing safety system that doesn't work 100% perfectly is better than having no automated safety systems. It's like calling safety belts unsafe because of the rare instances where they fail. If you do not like Tesla's engineering, pricing or their cars in general, that is fine. There are many conventional cars that will better suit your personal sensibilities.