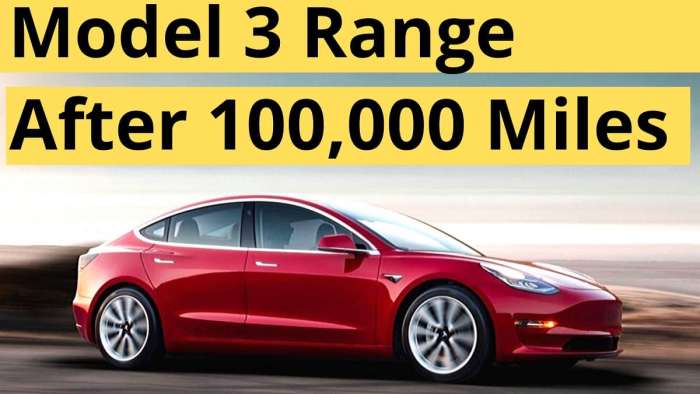 An owner of a Tesla Model 3 and an intensive driver posted a piece of very interesting information about the rage of his Model 3 after driving more than 100,000 miles. Twitter user @MCarbon posted a short video demonstrating the range of his 2018 Model 3.He has already driven 130,000 miles, which is almost 210,000 kilometers if you are watching from Europe or elsewhere. He says he has driven without almost any problems and now his Model 3 gets 98 percent of range per full charge after so many miles.

Interestingly another Twitter user, who viewed this video revealed that his Model 3 also only lost 2 percent of range after 100,000 miles, going from 310 miles per full charge to 303 miles. That’s basically only just over 2 percent loss after such high mileage, making the Tesla Model 3 a very good value.

The typical range is not the same as the standard range. Instead, it is calculated on the basis of a "typical" consumption and the battery capacity assumed by Tesla; if the consumption assumption does not change, the information allows conclusions to be drawn about the battery. Model 3, which I am talking about in this case, is said to be the variant with a large battery and rear-wheel drive (LR RWD), which is currently not available on the Tesla website. The car was bought in April 2018 according to the owner.

Twitter user TeslaJoy, who also has another good Tesla Youtube channel asked @MCarbon how he was charging and if he was supercharging his Model 3 to get such good efficiency in rage. “Yup. I supercharge 98% of the time as I’m on the road 320 days a year, @MCarbon replied.

Frequent direct-current charging, such as on the Supercharger, is considered harmful for all types of lithium-ion batteries, including those from Tesla. It is remarkable that the Twitter user reported a drop in reach of just over 2 percent. However, on request, he also stated that the battery should be kept between 30 and 70 percent wherever possible.

In any case, several other Tesla owners reacted to his new data with their own reports on mileage and typical range with a fully charged battery. Most of them seemed to be under @MCarbon's 303 miles, although they weren't nearly as far with their Model 3 (several, but probably not all in the same economical RWD variant). What exactly these differences are, is puzzling, but without first coming to a compelling result.

DeanMcManis wrote on April 3, 2020 - 1:26am Permalink
Just as Tesla is about to formally give details about their "million mile battery pack" at the battery, investor day hopefully later this month. Tesla had mentioned that the current battery pack was designed for a 300,000-500,000 mile lifespan, and the new design will greatly improve on that. So it is good to see that their bold assertions of reliability and longevity seem to be standing up to the test of time. My Volt and ELR batteries showed no loss of range, but GM was careful to build in a buffer (as Porsche and Audi have) to ensure that battery degradation is minimized, whereas Tesla and Bolt owners have to be more mindful to charge to 80% when possible to extend battery life. The nice part is that new EVs are steadily gaining greater EV range, so most owners don't have to worry about needing to charge up to 100% every day. Plus, new battery formulations and smarter battery management systems also conspire to extend battery life even further in newer EV models.
Phillip T Lowe wrote on May 29, 2020 - 12:46pm Permalink
I am in great envy of your Model 3 only lost 2% range at 100,000 miles. This was not my experience, and I'd say many Model 3 owners, posted comments which are consistently losing range every month. Having owned my M3 since July 2019, registered 10,100 miles, it had already lost 12 miles out of 310 mile range. After 10 months of ownership (about two months of little driving b/c of shelter-in-place, more like 8 months of regular driving), with relatively placid weather in Northern California, the lost of over 3 percents is a difficult experience to accept. With careful charging habit only up to 270 miles, rarely charging to full charge, I continue to lose range on a monthly experience. This is a profound mourning of dissonance, not seeing range lost similar to what you experienced.
Charlie Myers wrote on June 24, 2020 - 2:29pm Permalink
I have 18k on my model 3, purchased it in March 2019 and I get 277 miles per full charge versus the 310. These types of articles are not the typical experience - it takes a great deal of shine off the vehicle.
Phil wrote on June 24, 2020 - 7:44pm Permalink
yep, I am with you, 2% loss over 100k miles is far from the typical experience.
Unicollc wrote on September 26, 2020 - 1:38pm Permalink
I have a 2018 LR AWD model 3 with 40k miles. Ive done only $18.50 worth of supercharging on it. The rest has been level 2 charging to 80-90% (mostly 80%). I have very rarely charged it to 100%. I currently get only 270 miles on a full charge, if that.
BJ wrote on October 24, 2020 - 8:45pm Permalink
I've lost 10% after 7000 miles.
Davidradzieta wrote on January 4, 2021 - 7:22pm Permalink
Those are outstanding numbers most Tesla Model 3 owners are seeing 7.8% after a year. Some report a lot more. It would be interesting to know if these reports of 2% degradation came from Tesla stakeholders.
Fernando Romo Avila wrote on April 1, 2021 - 3:54pm Permalink
I have driven my 2019 chevy bolt for 115000 miles. I am still getting 260 mile range on a full charge.
Paul Braren wrote on December 2, 2021 - 9:58am Permalink
It's unfortunate both the article and the video don't spell out that this was the RWD version of the 2018 Model 3, which has more than the 310 miles of estimated range that Model 3 Long Range (AWD) owners have, myself included. Thus, the percentage loss looks smaller due to this crucial factor.