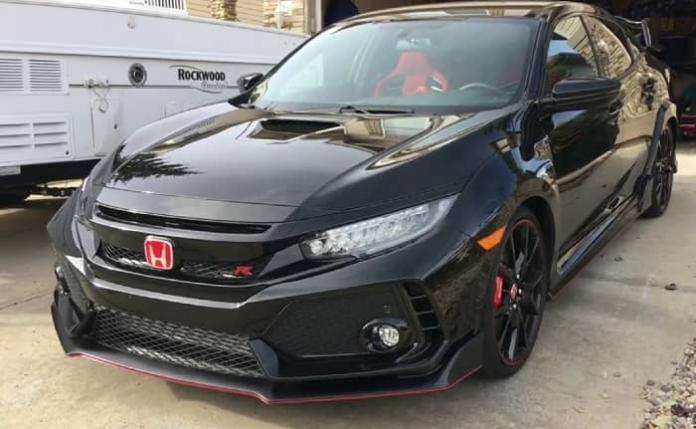 How do you unwrap and do the setup of your brand new vehicle? Pierce Dasian shows in this video of 2017 Civic Type R unwrapping, setup and overview.
Advertisement

So here is Pierce unwrapping his brand new 2017 Civic Type R hatchback in Cristal black pearl paint. He has been on the Civic Type R waiting list for seven months (yes, just like Tesla Model 3 waiting, people wait for their Civics too). He originally wanted a white one, but as you can hear him in this video, he says he ended up with this black Type R Civic. He says he got a black color because he was inpatient to wait for the white one.

His local Honda dealership called him few days ago and offered this black Civic Type R instead of the white one that he was waiting for.

This 2017 Honda Civic Type R is brand new. It only has 12.5 miles on it and still has some transportation contamination on the paint as Pierce unwraps it. You can see a little bit of the factory plastic still on the door sill and the door handles. Plastic wraps are still in the seats. He likes it because he says he wanted the be the first person to take off all the plastic packaging from his Civic.

He has only put 10 miles on it, but likes it very much despite not being the the color of his choice. Hey, at the end of the day, it's still a Honda Civic Type R.

He intentionally asked the dealership to not clean or detail his car so that he could do the detailing himself. After tearing off whatever remaining shipping protection film that was on the car from the dealership, he gives his Civic Type R a two-step wash. And like all the black cars, there's lots of little rub marks and what-have-you, even though the car is brand new.

Then he takes the wraps from the seats, but decides to leave the plastic on the bottom to protect the sofa little longer.

The seats of the Civic Type R are really cool. They have got that mesh back that's sweet. And you have that "Type R" marking all over it. It just screams "race car" everywhere, although the Type R is much more than a race car.

Well go ahead and watch the entire video here and let us know what you think in the comments. Have you unwrapped your vehicle?

Both Type R and Si Civics are great cars. If you are deciding which between the 2017 Type R and Si take a look at this story from TorqueNews by Roger Maxwell. By the way, you may have heard some complains about the 2017 Civic Type R Despite Gear-Grinding. According to Jalopnik, Honda claims there is no specific problem and here is what you can do before reporting a 2017 Civic Type-R transmission grind to Honda.