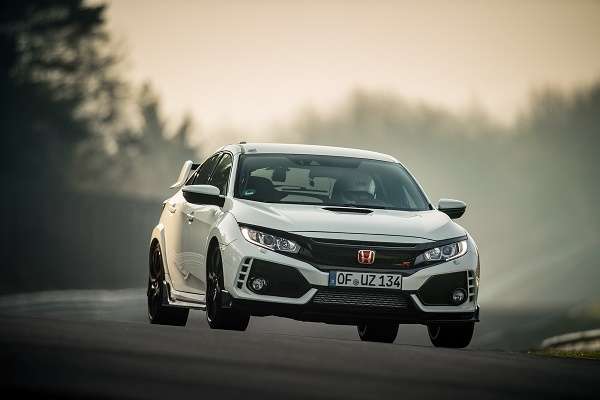 Could the soon to arrive in the U.S. English built North American specific Honda Civic Type-R rekindle the glory years of Honda car sport tuning? American Honda is betting on it. From where I sit, an unprecedented Civic Type-R fan and media buzz is driving a Honda performance hatchback feeding frenzy.
Advertisement

Reality check: When the first Honda Civic type-R rolls of the boat from Swindon U.K. in the next week or so, it will sit at dockside impound for an unspecified time, while American Honda Motors builds up enough dealership inventory to answer without perceived favor, the initial dealership order roll out. That’s just how it is my Honda fanboy friends, Civic Type-R will come when it comes.

Die hard Honda performance fans, club racers and auto collectors, some waiting for years, will by hook or crook, secure one of Honda’s rarest offerings -- and most gladly pay a yet undisclosed dealership premium, 10, 15%, or more above MSRP -- the norm for a very limited edition out-of-the-box club racer. We’ve seen quite a dealership markup on this rare Acura offering.

As much as I’ve tried to bury Civic Type-R hype and speculation with groundbreaking new model rollout and auto industry development news, Civic Type-R remains our most read auto-topic since August 2016, when Honda first announced specifications and hinted at the E.T.A. of the most anticipated car in American Honda history.

50,000 of you have dropped in, read and commented on what this track speed record holding Honda brings to the world of production, extreme performance, compact front-wheel-drive sport hatchbacks. Type-R may very well be the most talked about Civic in American Honda history.

FWD or AWD, the debate will always continue

The rebirth of Honda Civic completed

We believe the car that effectively completes the rebirth of the Civic lineup does so with exceptional engineered excellence, and track-tested mechanical reliability. But more importantly, brings civilized drive-ability and exceptional cabin comfort to a performance segment rich with chiropractic adjustment seat comfort, bone-jarring road to wheel vibration, and tire tread to cabin noise transfer. How many Civic Type-R’s will Honda import to the U.S.? Honda’s not saying.

Setting all hype aside, this Honda aficionado looks forward to driving the world-chassis 2017 Civic Type-R following the June dealership debut of the10th generation Civic Si. 2017 is a great year to be a Honda performance fan.

Tsingshan's Threat to Tesla: EV Maker Is In Battery Crosshairs
Tesla-Funded Research Reveals One of The Biggest Mysteries of EV Battery
END_OF_DOCUMENT_TOKEN_TO_BE_REPLACED