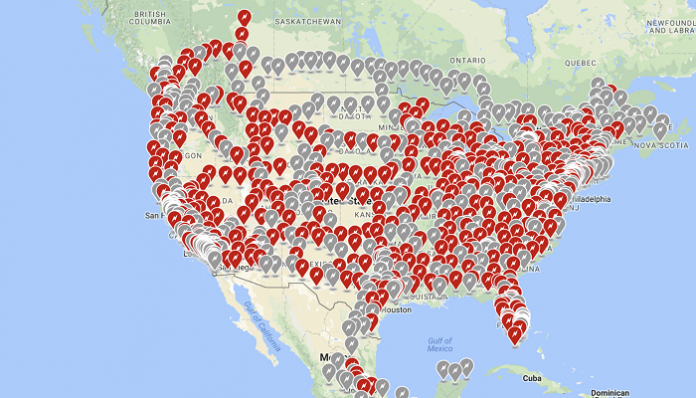 You can search any locations of the current and upcoming superchargers by using Tesla's Find US tool.

Tesla owners who look at the updates say it looks like a substantial expansion. Lots of new routes and areas are covered now by superchargers. This is very important because there are worries that new Tesla Model 3 traffic may overwhelm already overcrowded U.S. superchargers.

I asked Alex Guberman, host of the Everything Tesla YouTube channel, what he thinks about this update.

"The Tesla Supercharging network is by far the biggest difference maker that sets this brand apart from the rest of the competition. Even though Tesla cars are still by far superior to all other EVs available on the market, its Supercharging network is what makes its customers confident that their purchases are supported with the infrastructure which allows them to take long distance trips and do so for no cost whatsoever.

"Of course, with the upcoming Model 3 projecting to add 20,000 Teslas on the road every month, it is a reasonable concern that superchargers will become overcrowded to the point of being useless. Even now, many drivers like myself choose to pay for a gas car rental plus the cost of gas in order to avoid lengthy delays at some of the busier superchargers when I travel long distance within the state of California.

"However, the biggest problem that Tesla will face as the more affordable Model 3 finds its customers is the desperate lack of charging infrastructure at apartment and condo communities where most of the Model 3 owners live. That, in my opinion, will be by far the bigger challenge with the upcoming Model 3 than Tesla has faced so far," he wrote to TorqueNews in a written statement.

By the way Tesla also has new urban supercharges which are already installed in number of cities. Here is one of those superchargers in Boston displayed in this Youtube video.

They look really good. These new urban superchargers are a really good use of space too. They probably will expand massively. Tesla would do well to partner with huge supermarkets and install them at all stores.