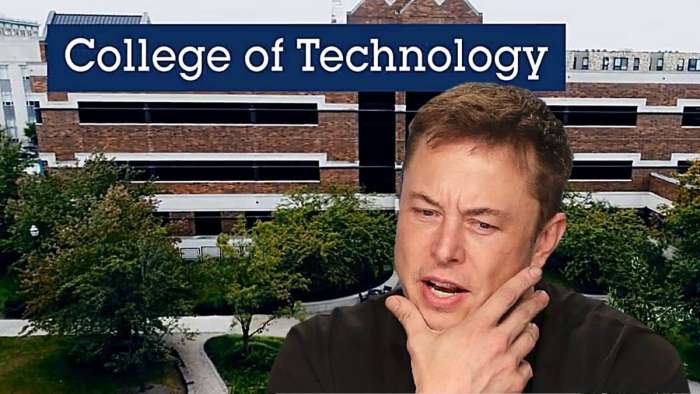 Hours ago this morning Tesla CEO Elon Musk made several Tweets revealing his desire to start a new university in Texas with "epic merch" and name it Texas Institute of Technology & Science.
Advertisement

I "Am thinking of starting new university: Texas Institute of Technology & Science," Tweeted Elon Musk early this morning. he then added two more tweets, writing "it will have epic Merch," and be "universally admired."

Now, for a moment I thought this was real, but then I noticed the "epic merch," and "universally admired" sections of his tweet and started to doubt it.

"Yes, you have to do it! You should invest around North Texas now. Dallas is a cool place and has a lot of potential here," comments a user named Serkan Inci. And others are asking if the tuition will be affordable. Schools like this in the US have become “for-profit” and put people in debt for decades.

In general, it could be a good idea. Elon Musk has the means to start several universities and colleges not only in Texas but also in different parts of the world: such as Africa, the Middle East, or Asia.

Note that Texas already has Texas Tech University, committed to teaching and the advancement of knowledge. it's a public research university.

Being at the helm of technological advancements in the 21st century and making the best electric vehicles at Tesla, gigafactories, and new EV batteries, Elon Musk has a far better foresight of the future of work and education than most people. This is why he opened a super-secret school named Ad Astra at the SpaceX HQ where his own sons and a select few SpaceX employee children study.

The information is scarce about how and what is taught at Elon Musk’s school Ad Astra, but Entrepreneur calls it "a mysterious disruptive school with its own system, in which his children and only a select few study." From what I have read, children learn critical thinking and get hands-on experience with the latest engineering and technology from an early age.

If Elon Musk one day indeed starts a university in Texas it will be a good idea, indeed, to teach young people critical thinking. I read a tweet in which one person suggested to slightly change the name and call it "Texas Institute of Science & Technology," as technological breakthroughs almost always follow scientific breakthroughs, not vice versa. However, I should also say that Tech improvements can create criticalities in accepted models which later will be questioned. Thus, what Musk suggested as a name for his university in Texas, will also work well.

I don't know if Elon Musk will start a university and call it a Texas Institute of Technology & Science, but I do believe that great wealth comes with much greater responsibility. We all need to be very careful with what we do with our possessions. We are the stewards in this world. We are not the owner. The Owner, one day is going to ask each of us, "turn in the account of your stewardship, for you can no longer be steward." (Luke 16:2).

Do you think Elon Musk will really start a Texas Institute of Technology & Science? If yes will it be in Austin or Dallas?

John M. wrote on October 29, 2021 - 10:48am Permalink
This has been a joke in Texas for 30 years. TITS. hahahaha Musk.
Armen Hareyan wrote on October 29, 2021 - 11:52am Permalink
You are right. I mentioned in my story that this may be a joke. But I also further developed the idea, offering a value that Elon Musk can think about. Great wealth comes with great responsibility.
Stewart wrote on October 30, 2021 - 12:58pm Permalink
It seems plausible that he would start a college that would teach his way at least in time for his kids to go to it. And if he does it would be typical for him to pick that name.
Stevo wrote on October 30, 2021 - 3:08pm Permalink
I agree with John, since it clearly spells out something as an acronym that would make sense of the epic merch and universally admired, seems obvious that at least with the name he is joking, though all jokes have a kernal of truth so maybe he is also thinking wouldn't do much good existing there if he didn't build out some worker training support system.
iain stuart wrote on October 31, 2021 - 3:09am Permalink
Since Elon Musk admires Texas so much, I can just imagine what his Mars colony will be run like.
Chico wrote on November 1, 2021 - 12:51pm Permalink
Sam Houston Institute of Technology.

LG's New EV Battery Plant Is a Welcome News for Tesla
Tesla Giga Berlin's New Hurdle: It's Not Only the Gov't, but Now Tesla Itself
END_OF_DOCUMENT_TOKEN_TO_BE_REPLACED