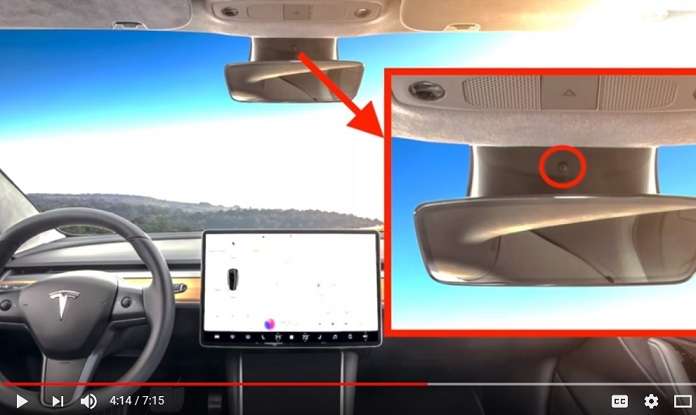 Tesla has made it a point to strongly emphasize that the Model S is its most premium flagship sedan. In most ways, the Model S is obviously better than Tesla's smaller, simpler and more affordable Model 3.

However, there are some key advantages that the Model 3 has over the Model S, explains Andy in this video. Watch the video here and read Andy's script below.

The first obvious advantage of Tesla Model 3 over the Model S is the cost. The base Model 3, which is already being delivered, is $36,000 dollars at its cheapest with that $1,000 dollar unavoidable delivery fee. On the other hand, the cheapest Model S is $75,000. So, technically you could get two base Model 3s for the same price as on base Model S. It's kind of a two-for-one deal there.

Now, we still don't know how much a loaded all-wheel-drive performance version of the Model 3 will cost; however, it's kind of safe to assume right now that any Model 3 will be about half the cost of its equivalent in a Model S. 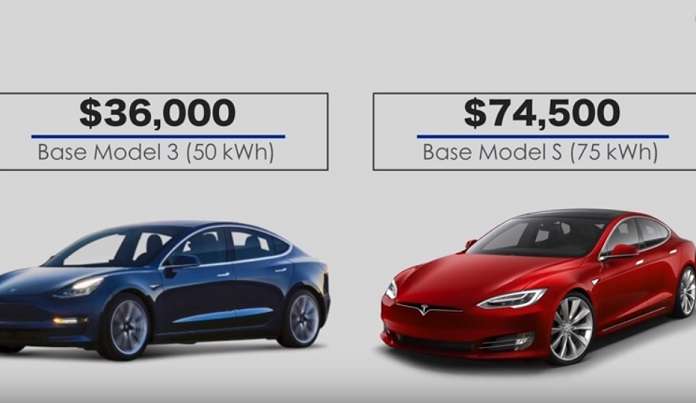 So, even if you get a Model 3 with the same add-ons and options as if you would with the Model S it will probably come out to be about 50 percent of the price.

Also because of the drastic price difference between the Model 3 and the Model S it's also safe to assume that the car insurance should be cheaper on the Model 3 compared to the Model S.

So if saving money is a priority for you choosing the Model 3 will definitely give you that advantage.

So, even though they are both equipped with 75 kWh batteries, the Model 3 actually has more usable battery capacity compared to Model S. What's even more interesting, according to EPA the $45,000 long-range Model 3 actually has 334 miles of range per charge compared to the $94,000 Model S 100D, which has 335 miles of range. That's a $55,000 dollars of difference in price with just a difference of one mile in range.

That's pretty crazy and according to Andy Slye Tesla is choosing to under-advertise the estimated range of the Model 3. And not only that, but Tesla executives said that the 18-inch arrow wheels that come standard on the Model 3 can potentially add up to 10 percent range. Now, some tests have shown that to be more around 5%, but then, that's something that the Model S still does not offer on its current lineup.

Model 3 has one of the most minimalist interiors in a car right now. It lacks a lot of the physical buttons and knobs that were typical in cars up to this point in time and it replaced most of these functionalities with one big center 15-inch touchscreen display. However, the Model 3 has some things that the Model S does not.

For starters the Model 3 has a small interior facing camera built into the rear-view mirror and while Tesla has not yet said what this camera will be officially used for, its most likely the camera is there to provide some type of facial recognition features for autopilot or driver profiles, and so very well meant to monitor the inside of the car when it's used in Tesla's future ride-sharing network.

The Model 3's center console has more storage space than the Model S and with the Model 3 premium upgrade package, it also has charging docks for 2 smartphones. Model 3 has coat hooks, lighted vanity mirrors, folding rear seat, RMS with cup-holders and door pockets.

The Model 3's infotainment computer has a liquid-cooled and faster processor, which results in a more responsive touchscreen and the media control unit is now powered by an Intel SOC instead of the NVIDIA Tegra in the Model S. An Auto-pilot ECU is still powered by NVIDIA, but it's worth mentioning that the Model 3 needs a lot more processing power because it has to do everything on one processor. The Model S runs the navigation routing and voice recognition on the instrument cluster computer, which divides the workload.

Also, since the Model 3 has such a minimalist interior, that provides a better field of vision out of the windshield because it's completely flat all the way across the dashboard sincere there is no instrument cluster on the Model 3. And the front hood doesn't stick out as much as it does on the Model S.

The last key advantage that the Model 3 has over the Model S is size and space. Now you may say how can that be because the Model S is such a bigger and more spacious car. We get that's true.

Model S is designed to be a better and bigger car than the Model 3. However, the Model 3 has its advantages too.

The Model 3 has been reported to have better handling because of it weighing less than the Model S.

The lighter weight of the Model 3 also results in better range when compared to Model S of the same battery capacity.

Also, the Model 3 has the same amount of the front legroom as the Model S and only 0.2 inches less legroom in the back.

Thus, even though the Model 3 is smaller you may not notice it as much.

So this wraps ups Andy's 5 key advantages that the Tesla Model 3 has over the Model S.

Does this mean that the Model 3 is a better car than the Model S? Absolutely not. Model S has a ton of advantages over the Model 3. We also expect Tesla to release a refresh of the Model S very soon.

So what do you think? Leave a comment below in the comments section and let us know your view on this subject for discussion. No wonder people are waiting in this Tesla dealership in NYC for 30 minutes to sit in a Model 3.

You may also want to read about these few advantages of Chevy Bolt vs Model S, but are they comparable?

LG's New EV Battery Plant Is a Welcome News for Tesla
Tesla Giga Berlin's New Hurdle: It's Not Only the Gov't, but Now Tesla Itself
END_OF_DOCUMENT_TOKEN_TO_BE_REPLACED