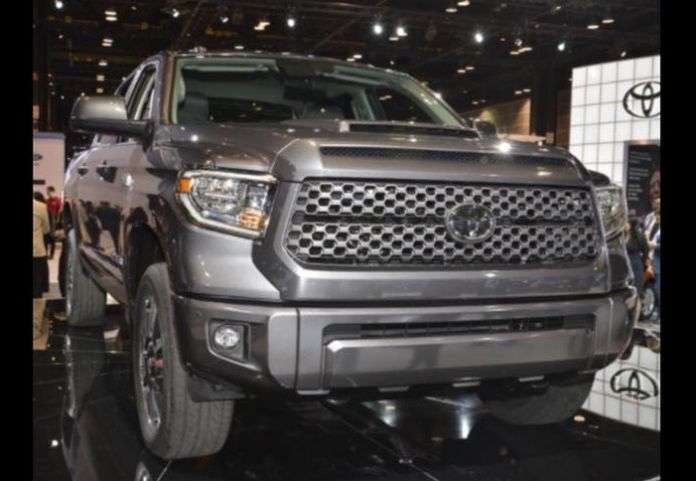 These Are The 9 Things Toyota Tundra Owners Want From Toyota

Toyota Tundra is a great truck but could use a few improvements. Torque News asked Tundra owners and fans what type of interior and exterior improvements they would like to see and heard these responses.
Advertisement

Each paragraph, published below, is a separate opinion, which is the writer's vision of how he sees the next generation Toyota Tundra. Torque News publishes them as they were written.

Better Fuel Economy Tops The List
1. All currently Tundra owners want better MPG on their Tundras. In fact Tundra's fuel economy was the main topic discussed in yesterday's opinion piece, submitted by a Torque News reader at Prediction About Toyota Tundra: Unless Improved Not Sure Where It's Headed. I know Toyota can do something about the MPG of Tundra, and they need a 6.5" bed Crewmax.

2. Give the Tundra a better MPG and more gears in transmission. These are #1 and #1 for me. Everything else is less priority. Minor notes - my 2016 DC I did the driver grab handle and rear seat fold mods, they should be standard. I don't think we need leather and all that, but instead give us a better MPG and a loaded truck we can use. Currently Tundra is getting up to 15 city and 19 highway MPG.

3. I think Toyota needs to come out with maybe an 8 or 10 speed transmission, ( to my understanding it helps with efficiency?). I could be wrong though. In a perfect world Toyota would come back with the 4.7 V8. Why is it that Chevy used the 5.7l 350 block from the late 60s to the mid 90s. And to this day GM still uses the 323 CI V8 Vortex Block (aka 5.3l) since the mid 90s and still puts it on its new pick ups with many improvements over the course of time obviously. I guess what I am saying is Toyota needs to go back to the first gen and improve as much as possible from there.

Diesel Tundras, Which Are Not Options
4. I drive a Ford diesel because I tow stuff that a Tundra won’t. I would love for Toyota Tundra trucks to build a diesel version. A 3/4 and 1 ton. And I do think the current model is sort of 3/4 ton-ish, but it’s not there. Lots of guys that buy the larger trucks still need a full size bed and tow heavy items like backhoes so I would like to see that option from Toyota. Ford rules where I am from (Texas) and honestly a 3/4 Powerstroke is about as common as a 1/2 Ford and either are way more common than a Tundra.

5. I wouldn’t have a need for it at this moment & time but I think a 1ton dually diesel would bring buyers away from the big 3 choices.The Nissan work van sure is popping up everywhere. (Editor's note: Diesel is dying. Toyota is not going to bring diesel back. See Toyota Begins Diesel Scrappage Site In Europe.

Need for Lighter Tundra
6. We need much lighter and smaller Tundra tucks. They need to be close to the size of the Ford F-150 and Ram 1500. The new Tundra needs to be aluminum. Its nterior needs to be much more simple and not as ugly as it is. It needs the styling of the Toyota Tacoma. Simple as that. Because everyone knows Toyota has the best reliability.

7. We need lockers and a standard large fuel tank. No locker option is silly. Especially from a company who was one of the first to offer factory locker.

8. It would be great to have a better sound system. Armrest buttons that are backlit. Storage under rear seat.

9. As much as I love my tundra, Toyota does need to step up in the truck market, to meet there new goal of 60-40 with 60% being new trucks. New redesigned frame: boxed mostly we don’t need the c channel 3/4 ton idea that Toyota tried to go to. 8 speed transmission that already exists, and updated 4.6 and 5.7 motors with some extras like key-less entry.

Hopefully many of these improvement requests are coming to the next Tundra update. If you are reading this story, please let us know in the comments section below what other improvements you would like to see in the upcoming Tundra. Let's discuss them. If you liked this article and think it may help your friends, consider sharing or tweeting it to your followers.

Justin wrote on November 28, 2017 - 5:52pm Permalink
I would like the next Toyota Tundra to have a handle on the driver side to help get in or out of the driver seat. Why take that away? I'm wrecking my seat.
Scott wrote on November 28, 2017 - 5:54pm Permalink
The current power train is very good and it outperforms all the other 1/2 ton trucks (in my opinion). But why not offer a 3/4 ton HD with a higher payload? If they are not ready to get into the diesel market yet why not look at a slightly larger V8 to rival the 6+ liter motors? The fuel mileage isn’t one of my biggest concerns. I’m looking at towing aspects that many use it for. Even the current 5.7 could handle the extra towing weight in an HD class truck.
Bill mee wrote on November 28, 2017 - 10:03pm Permalink
At 6'6" tall none of Toyota's truck products have headroom for me. In fact they are the worst on the market. Yet I fit in a Yaris so what gives. I think I can afford the gas an extra 2" headroom would cause. So I drive a f150 instrad
Mark Wood wrote on January 11, 2018 - 11:31pm Permalink
The things i would like to see most basically make it a full size tacoma ! 1. Locking Diff. 2. Gearbox that allows you to lock in a gear not 'Go through" 3. 110V outlets in Front Bumper and in Bed. 4. Prewired winch plate in bed. 5. Clock not in the touchscreen ( i drive with it off as serves no real purpose other than distract at night) 6. Revert to twin headlight set up, 7. stronger tailgate 8. bigger gap between tailgate and bumper (snowpack is a real problem) 9. Std 6 ply tyres 10. std rear swaybar sort that lot and you have the most practical truck on the planet !
Bill jones wrote on January 13, 2018 - 11:11pm Permalink
Toyota needs to fill in the gap with their commercial trucks Hino trucks
Lori S wrote on February 7, 2018 - 7:04pm Permalink
Toyota needs to go back to the first generation Tundra. And guarantee the frames for 10 years. I loved my 2003 SR5 it the frame rotted out in 8 years.
martin wrote on February 9, 2018 - 1:06am Permalink
MPG, MPG, MPG. I get less than 12mpg when just pulling an empty trailer, and less than 10mpg when loaded. Really, Toyota? Aren't trucks made for pulling? I love Toyota, but I am seriously looking at an F150, or, god help me, even a Ram 1500 Diesel..Do you see what you have done to me Toyota? You are driving me insane waiting for a more fuel efficient Tundra! Oh, and please fix the toe-in. I barely touch the gas and the truck takes off like a freaking rocket at every traffic light. It is extremely difficult to modulate. While this would be great if I was on an NHRA track trying to get the hole shot, it aint so great when you are sitting at a traffic light next to a cop! Personally, I'd like to see a 3-4L diesel like the Ram or the upcoming Ford. Just keep the freaking cost down so I don't have to mortgage my house to pay for it.
martin wrote on February 9, 2018 - 1:09am Permalink
Oh, and one more thing. It is big enough. I personally would be happy with a 2006 size tundra with a 3L diesel. Big enough, great gas mileage, and "affordable"! I love my 5.7L, I'd trade it for a previous generation size Tundra that gets over 30mpg in a heartbeat.
David wrote on March 14, 2018 - 12:04am Permalink
They need tilt wheel that GMC has, if I drive I have it set , my wife drives she has to set , it hard to get right on the mark! Tilt should tilt to dash and chest not just fixed up and down, older people 50s up can’t extend arms like we use to. And more settings in seats , for our backs, also I would like cloth seats in limited, thanks
BK wrote on September 17, 2018 - 1:11pm Permalink
I don't know what tundra you drive but my old 2011 limited has tilt forward, backward, up and down.
Trevor Chaulk wrote on March 17, 2018 - 8:07am Permalink
Don't agree with the full content of this article. Yes, everyone would like better MPG but going lighter and using aluminum would be the wrong direction for the Tundra. Right now the Tundra is the closest on the market to a true pickup and is something Toyota should stick to. Pickup's were designed for work and and too light a truck with soft materials like aluminum would ruin the Tundra.
Tim wrote on May 21, 2018 - 7:06pm Permalink
I really get sick of people saying that pickup truck owners shouldn't be concerned with fuel mileage. Why shouldn't we? Trucks are getting way too expensive for what they are. And to pay for something that expensive and get 12-13 mpg, i would automatically turn the other way. I currently have a 2008 Tundra and have been patiently waiting for Toyota to actually update their truck. I want better exterior styling, better MPG, better interior ergonomics, and with the same reliability. If these things don't happen, I will be moving to another truck brand.
Bill wrote on May 22, 2018 - 9:40am Permalink
Small price to pay for quality

Elon Makes a Cybertruck Statement With an Action, But Quiet in Words
Tesla's Record Month in China: Doubled Registrations in March 2021
END_OF_DOCUMENT_TOKEN_TO_BE_REPLACED