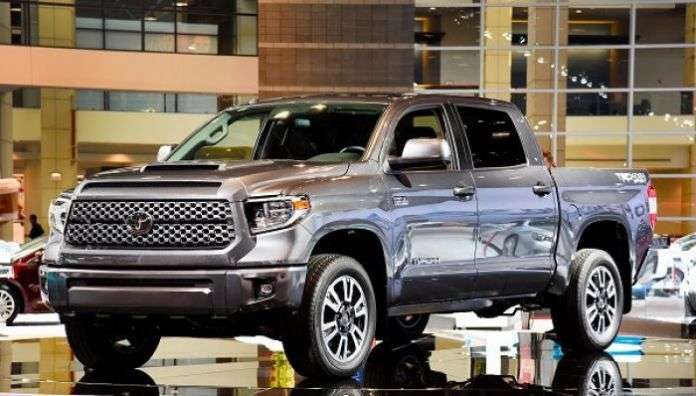 Prediction About Toyota Tundra: Unless Improved Not Sure Where It's Headed

Tundra is a tried and proven vehicle, but Toyota must look beyond what it's offering today to have a much more modern, perhaps hybrid, Tundra or no Tundra by 2020.
Advertisement

Early in September Torque News reporter Senita Hignojoz published a story discussing the Top 5 Reasons Toyota Tundra Pickup Trucks Are a Good Investment. The story received many good comments, adding more valuable information to the discussion, but this one, from a username Gregsfc stood out and I wanted to share Greg's opinion below with Torque News readers.

What do you think Toyota must do with Tundra truck to keep it competitive in the next decade? Here is what Greg commented.

If Toyota does nothing, but keep its tried and true, heavy and powerful Tundra truck and 15 mpg 4WD pickup with the larger V8, irrespective of quality and durability, it won't sell enough to people who will accept such an antique product to keep manufacturing them. You might keep what you've got, but by 2020 there will either a much more modern Tundra, or there will be no new Tundra truck.

Ford has Ecoboost at 21 and 22 mpg combined ratings, 3.5 and 2.7, receptively. GM has a base V6 at 20 and a V8 mild hybrid with 383 peak ft lbs and 20 mpg. Ram has a 3.0 V6 diesel at 23 combined with 420 ft lb peak at 2000 RPM, and even Nissan has a big V8 with similar performance as Tundra but 2 mpg higher. Not enough consumers will accept these gas- guzzler only choices offered by Tundra to keep market share. Not to mention the penalties they'll pay due to CAFE.

Toyota will bring in new auto tech. It has even stated it. But the question is... Will it be enough to compete with the American brands that will be employing one or more of the following strategies: diesels, engine downsizing and turbo charging, dynamic skip fire and mild hybrid tech applied to V8s, auto start- stop, aluminizing bodies to lighten 300- 700 pounds?

GM most assuredly will have an aluminum truck with dynamic skip fire cylinder deactivation and mild hybrid engine choices next fall. They will most assuredly offer more power and torque and more capacity, and they will likely pretty much match Ford's numbers. Ram will have a new truck before that. Not in its first year, but in successive years. There are rumors of an inline 6 to replace the V8 Hemi. I am guessing it'll be turbo charged. There are rumors of a new diesel, slightly larger and inline.

These will make big splashes in the market. I'm not sure where Toyota is headed, but I would make a bet towards hybrids and mild hybrids. I'm not sure if if Nissan can or will compete.

If you would like to share your opinion to this story, please write it in the comments section below. What do you think the near term future holds for Toyota Tundra? Will it stay competitive with current MPG? If you liked this article, consider sharing or tweeting it to your followers.