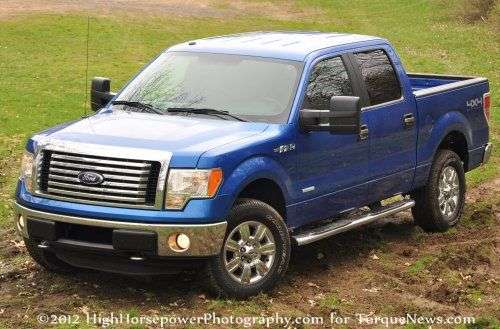 I recently had a chance to spend some time in the 2012 Ford F150 XLT 4x4 with the 3.5L EcoBoost V6 and since this was my second time testing the F150 powered by an EcoBoost V6 from the 2012 model year – I took a little different approach to my road test this time around with a long drive on the highway to test the fuel economy figures of the super-efficient engine.
Advertisement

This was my second time testing the 2012 Ford F150 4x4 with the EcoBoost V6 engine but this time, I was in an XLT model as opposed to the FX4 model that I had months back. While driving the F150 FX4, I put the EcoBoost V6 through the rigors of real truck life – including towing, hauling and battling rough, unpaved roads – through all of which the EcoBoost performed beautifully. The ability to perform these truck tasks by this relatively small twin turbocharged engine has been questioned by numerous skeptics but in the long run, the EcoBoost proved that it can do anything that the V8 options in any modern half-ton pickup can do. The other big test for the EcoBoost V6 is offering the impressive fuel economy that Ford claims so with this EcoBoost F150, rather than towing, hauling and playing in the mud, we took a 700 mile trip from Michigan to Pennsylvania – giving a us a great chance to test the real world fuel economy measures of the EcoBoost’d F150. During this drive, I made regular gas stops along the way to test the actual fuel economy figures based on gallons of gas used and miles driven.

The Drive
My reviews generally start with a look at the interior and exterior design but since we have tested a similar truck in the past, my review of this 2012 Ford F150 4x4 XLT EcoBoost begins with the drive impressions from the turbocharged half ton pickup. The EPA claims that the F150 in this configuration yields an impressive figure of 15 miles per gallon in the city, 21mpg on the highway and a combined figure of 18mpg. My drive from Detroit to Pittsburgh took me through a variety of highway driving conditions beginning with the dense, construction-obstructed traffic of Detroit’s I75 to the long, open, flat Ohio Turnpike to the hilly Interstate 79 through Pennsylvania heading into Pittsburgh.

During the early stages of my trip, the 2012 Ford F150 4x4 with the EcoBoost V6 was averaging less than 14 miles per gallon when dealing with the frustrating stop and go traffic on I94 and I75 around the Detroit area. This presented what were essentially the worst aspects of city driving as we moved in bursts of about a quarter mile at a time, reaching speeds only in the mid 30s before being forced to lurch back to a stop. This went on until we were well south of Detroit and as we neared the Ohio Turnpike, our fuel economy figures were hovering around a disappointing 16 miles per gallon but I am admit that my frustration with the stupid traffic caused me to drive in a manner that was less than idea for achieving great fuel economy.

Once I got onto the I280, heading towards the Ohio Turnpike, the fuel economy figures on the on board vehicle computer improved considerably and by the time I had spent an hour cruising along the wide open vastness of the northern Ohio plains, the fuel economy of the 2012 Ford F150 EcoBoost had climbed up into the expected combined fuel economy range of 18 miles per gallon. More importantly, I found that when cruising at the 65mph speed limit on the traffic-free Ohio Turnpike, the trip computer stated that I was getting around 21-22 miles per gallon. During this long run across northern Ohio, I also made a stop to check the actual fuel economy figures and the on-board computer was very accurate – with my test truck getting 21 miles per gallon. I should point out that while cruising on the highway, when the speeds climbed up into the 75-80mph range, fuel economy figures dropped into the range of 18-19mpg so those with a lead foot in an area with a higher speed limit may have a more difficult time hitting those 21mpg figures. By the time that I got to the PA/Ohio border, my EcoBoost F150 was averaging slightly over 18 miles per gallon.

The highway drive through Pennsylvania contained more road driving but unlike the Ohio Turnpike, I79 through PA has far more hilly terrain combined with increasing traffic that knocked down the fuel economy of the 2012 F150 EcoBoost a bit. The speed limit fluctuated between 55 and 65 miles per hour but the hills decreased the fuel economy into the range of 17-18 miles per gallon. By the end of my 370 mile drive, my actual fuel economy figure for the drive was 17.8 miles per gallon. That is a shade under the 18mpg figure stated by the EPA but considering the amount of traffic and terrain that I encountered on the drive – I was very impressed with the real world fuel economy figures of the EcoBoost’d 2012 F150 XLT.

Once I got to Pennsylvania, I had a chance to test the fuel economy figures around town and in a very rural setting, the 2012 F150 EcoBoost got better than the 15mpg advertised by Ford and the EPA…and I wasn’t driving gently. However, the area in which I was visiting had very few causes to stop so there was almost no stop and go driving during my test sessions in the South Hills area of Pittsburgh. While in PA I also had a chance to deal with some messy unpaved roads and the 2012 F150 XLT performed just as well as my FX4 test truck.

While I was driving the 2012 Ford F150 EcoBoost 4x4 XLT to get good fuel economy, there were points along the drive where I felt the need to put the hammer down and rocket around slower moving traffic and at that point – the EcoBoost V6 really shines. Forcing out 365 horsepower and a whopping 420lb-ft of torque, the F150 XLT effortlessly climbed towards the century mark as I hurried past a group of slower moving vehicles before hitting one of my exits. While cruising on the highway, the EcoBoost V6 has absolutely no audible drone in the cabin and even when you thrust the EcoBoost into passing gear, the truck is still surprisingly quiet. While it has a ride that you would expect from a half ton pickup capable of towing over 11,000 pounds, the 2012 F150 was surprisingly smooth and very comfortable on the highway.

The Exterior
My 2012 Ford F150 4x4 XLT EcoBoost looks very similar to the rest of the 2012 F150 lineup with the exception of the large decals on the bedside and the chrome badges on the front fenders. Unlike the FX4, my XLT test truck sported a set of chrome set bars, chrome headlight bezels, a chrome grille treatment and chrome front and rear bumpers (thanks to the XLT Chrome package) – as opposed to out FX4 test truck that had a black grille, black bezels and body colored bumpers. The XLT also came fitted with large towing mirrors and the standard chrome wheels rather than the brushed aluminum wheels on the FX4. When it comes down to the brass tacks, the 2012 F150 XLT packs a more luxurious exterior layout than the sportier off-road ready F150 FX4.

The Interior
My 2012 Ford F150 4x4 XLT EcoBoost test truck came in the Super Cab configuration which means that there is tons of space for the front and rear riders. The rear seats feature a 60/40 split design that allows you to convert part or all of the rear seating area into additional cargo space but when the seats arent folded up – there is plenty of room for an adult to sit comfortably and even stretch their legs a bit. The interior of my 2012 XLT test truck was fairly basic but it did come with the optional front bucket seats and a fixed center console/arm rest with tons of storage space under the lid and room for two large cups in the cup holders.

The gauge cluster of my 2012 F150 XLT 4x4 wore the same pair of large gauges (speedometer and tachometer) as the FX4 with four smaller gauges running across the top of the 4” LED information screen. This screen offers everything from fuel economy and extra gauges to trip information and the Ford “Truck Apps” that include parameters like front wheel angle and the pitch of the truck. In my uses, the Truck Apps weren’t particularly useful but they are cool feature regardless of their real usefulness. The center stack was packed with buttons to control the standard stereo system which includes AM/FM, CD, Sirius Radio and Auxiliary input which for me was the USB port mounted low in the center stack. While my test truck was fitted with the base model sound system, it still sounded great on my long drive and the steering wheel mounted controls for the radio and the cruise controls system allowed me to make changes on the fly without taking my hands off of the wheel. The readout for the stereo system appears on a thin screen mounted along the top edge of the center stack and dashboard. Below the stereo controls, the 2012 F150 has a very simplistic HVAC system that relies on good ol’ buttons and knobs – which can be a nice change for those buyers looking to avoid high tech touch screen gadgetry.

The Final Word
After my second time in a 2012 Ford F150 powered by the EcoBoost V6, I have found that not only can the twin turbocharged V6 do anything that a V8 can but it can also reach incredible fuel economy figures when it is not under heavy load. Some old school truck buyer might question the ability of the EcoBoost V6 to conduct itself like an American V8 but with fuel economy figures topping the 20mpg range on the highway in real world testing, the Ford F150 EcoBoost 4x4 makes good on all of the promises made by Ford Motor Company. Incredible power and impressive fuel economy for a truck of this size combine to make for one great drivetrain – leaving no question as to why the EcoBoost V6 has quickly become the most popular engine in the F150 family.

Ford was concerned early on that the skeptics would outweight those buyers who were interested in a twin turbo V6 pickup truck but the real world results with the EcoBoost F150 lead me to believe that this engine will be around for a very long time.